Kathy Griffin demanded his name be made public. A musician offered a bounty to punch him in the nuts. Another ex-CNN staffer said he had a ‘punchable face’. He’s a High School Junior.

And not a damned one of them was behaving like an adult.

After WaPo set the match to the fuse, with a now-debunked story denouncing a bunch of sightseeing High School Juniors in their MAGA hats ‘Racists’ who were somehow ‘threatening’ Native American Vietnam Vet Nathan Phillips, the oh-so Tolerant Left rolled into action.

Ps. The reply from the school was pathetic and impotent. Name these kids. I want NAMES. Shame them. If you think these fuckers wouldn’t dox you in a heartbeat, think again. https://t.co/IS80wiaQ7v

Well, well, well, looking here. Maybe you should let this fine Catholic school know how you feel about their students behavior toward the Vietnam veteran, Native American #NathanPhilips https://t.co/2lavbEhKVa

Names please. And stories from people who can identify them and vouch for their identity. Thank you.

He was ‘outed’ and both he and his family have faced threats of violence. He’s a freaking child.

The Media has bent over backwards to defend my Parkland Highschool liberal peers, no matter what outrageous things they have said.

But now they have tried to ruin a highschool kid's life, over fake news.

The student was a Trump Supporter. pic.twitter.com/qgZMybHkZd

In their unrestrained zeal to destroy a stranger who voted for the ‘wrong’ President, they accidently ‘outed’ a kid who had absolutely nothing to do with the incident, disrupting a family wedding in the process.

2) People then proceeded to spam my family with harassments and threats of physical violence. We then find out our parents address was posted online. If that wasn't enough, our family operated business has been slandered and attacked.

4) My parents, uncles, & aunts, receive messages stating they are pieces of shit parents and won't be able to protect #MichaelHodge forever… seriously what kind of behavior is this?

6) People then started circulating articles of him regarding his dreams and goals of being a chef, finds the college he plans on attending and proceed to blow them up encouraging them to rescind offer and calling him a racist POS…

(There’s more in the thread. If you want to keep reading, just click the date stamp at the bottom.)

Busting up someone’s wedding day with threats… harassing a kid who volunteers with Special Olympics and is a member of the Drug-Free Club of America?

Well done, guys… thank you so much for saving the world from THAT dangerous menace.

I personally hope that family lawyers up and takes whoever wrongly named them and ruined their wedding day to the cleaners.

Meanwhile, someone named ‘Wheeler Walker Jr’ was literally inciting violence against a minor, and offering a reward for video of it:

Shortly before 7 p.m., Hoffman, using an account for his alter-ego country music character “Wheeler Walker Jr.” tweeted, “If you know this little shit, punch him in the nuts and send me the video of it and I’ll send you all my albums on vinyl, autographed.” 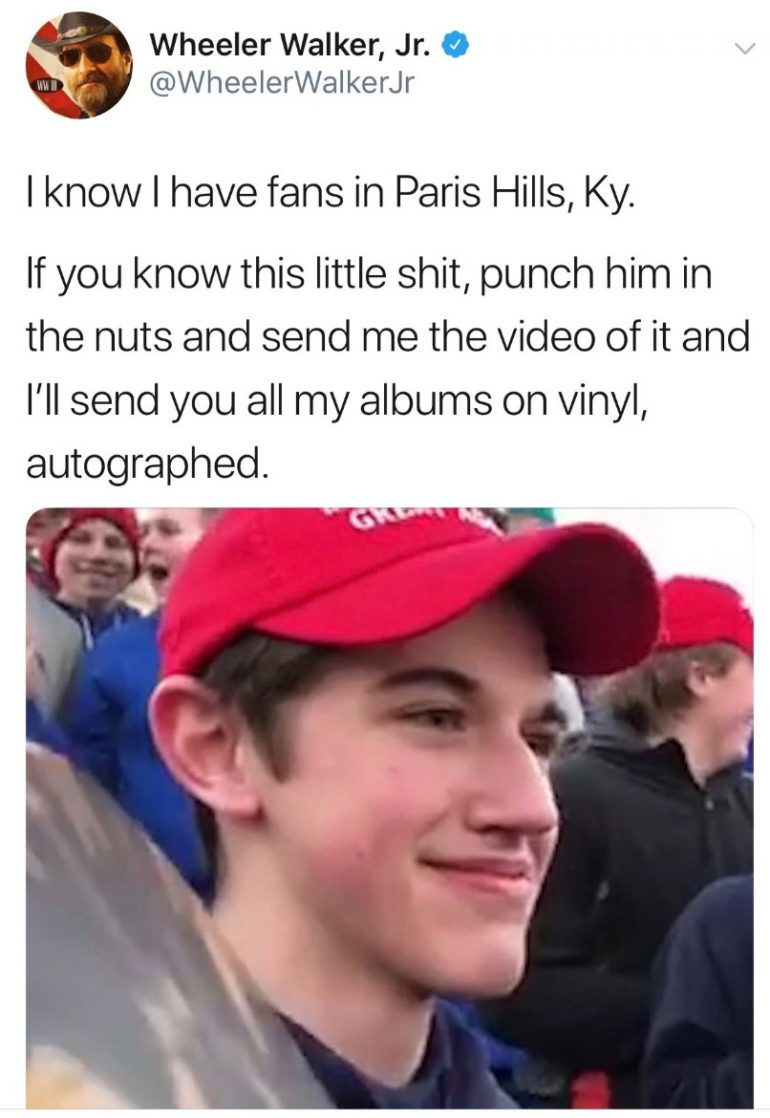 More class acts on Twitter… notice the blue check of this film producer:

Ironic — the guy who produced ‘Beauty and the Beast’ failed to learn the key lesson of the story.

(Oops. Now he’s changed his privacy settings for some reason.) Fortunately, we’ve got a screen grab.

Even (former) CNN personality Reza Aslan (who was dropped for calling the President a POS) said he had a ‘punchable face’.

Obviously, he’s learned nothing about the downside of Twitter since getting axed by CNN. And has he never heard the expression involving ‘glass houses’? 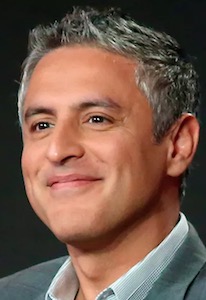 It sure is a good thing they cleaned up Twitter by getting rid of some comedians that tell the ‘wrong’ jokes, some conservatives and that oh-so dangerous threat ‘Alex Jones’, eh?

Social media is soooo much more civil and respectable now that they’ve rescued us from all these mean people.

Without even having all the facts, newly-elected Democrat Deb Halland was calling for expulsions of the students involved.

No respect for due process, and this woman will be shaping legislation?

Yep, that cinches it… she really IS a Democrat.

All this outrageous slander has been noticed… and could carry some real and unpleasant consequences.

I will represent the kids for free if they want to sue @maggieNYT for obvious libel. https://t.co/VmqVqIVNoe

Remind me… is inducing violence against a minor prosecutable?

I’m pretty sure it is! Won’t this be fun!