Hey Media(D) — how does it feel to be instrumental in the endangerment of School Children?

It was bad enough when the Twitter Mob started piling on those ‘evil’ kids in their iconic red caps.

But with Elites, Entertainment Celebrities, and News Media (with more than a little blurring of those lines) piling on with aggressive rhetoric, it is now unsafe for those students to go to school.

Orwell’s ritual of “Two Minutes Of Hate” in the novel 1984 was an outpouring of senseless rage against a designated enemy, but it was only for two designated minutes a day. Clearly, Orwell failed to anticipate anything like the Left’s use of Social Media.

They took the idea and really ran with it. Now they’re heckling Strangers 24/7.

Past and Present CNN employees openly wished harm on the students — whether Doxxing them (Kathy Griffin) or fantasizing about punching them (Raza Aslan, Bakari Sellers).

Another of CNN’s media ‘darlings’ got in on it…

Plus there were suggestions to burn down the school with the kids in it… flippant mentions of a school shooting that would NOT be objectionable… illustrated references to putting kids hat-first into a wood chipper… and literal offers of a bounty for punching a fifteen-year-old kid ‘in the nuts’. And this: 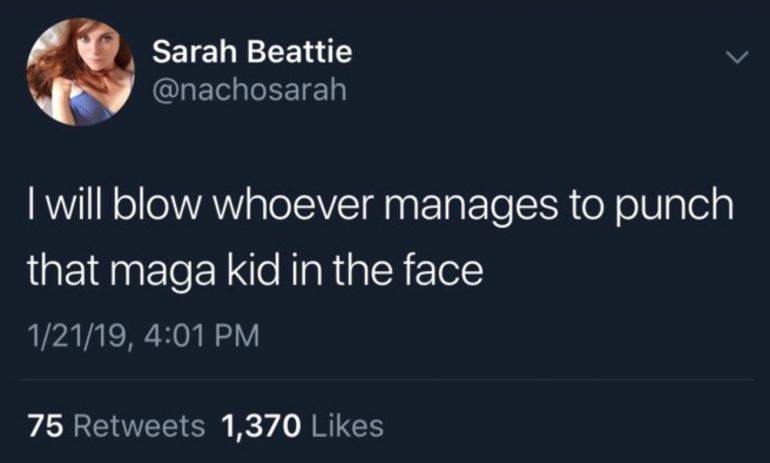 Even after the lies in the story had been exposed, she doubled down.

The kid is fifteen. If she’s looking for Sociopaths, she should go find a mirror.

But it’s ok to hate them. Because they’re Catholic. And Pro-life. And did you even SEE the hats they were wearing??? 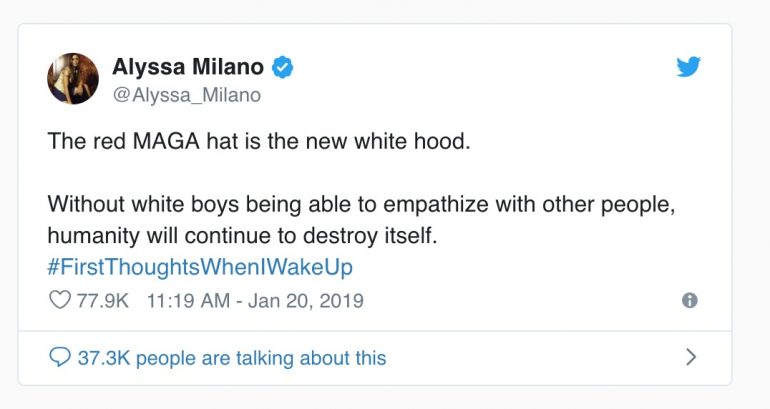 The above tweet has since been deleted. But this one is still there:

Let’s not forget—this entire event happened because a group of boys went on a school-sanctioned trip to protest against a woman’s right to her own body and reproductive healthcare. It is not debatable that bigotry was at play from the start.

What is the end result of all this Liberal outrage over a completely bogus and (literally) ‘Trumped-up’ incident?

“After meeting with local authorities, we have made the decision to cancel school and be closed on Tuesday, January 22, in order to ensure the safety of our students, faculty and staff,” reads a letter to them from the school’s principal, Robert Rowe.

“All activities on campus will be cancelled for the entire day and evening. Students, parents, faculty and staff are not to be on campus for any reason. Please continue to keep the Covington Catholic Community in your prayers.”

…Extra security was to be in place at Covington Catholic High School when students returned to campus Tuesday after threats were made against the school and its students over the weekend.
Source: Fox19

How bad is it when even ‘Captain America’ (Chris Evans) sides against these kids?

Authorities have decided that the outrage — staged by an activist, distorted by obscenely-biased media reports, and whipped into a frenzy with social media — has created an unsafe environment for school children even younger than the ‘March For Our Lives’ activists they all cheered less than a year ago.

So the very same people who rallied in support of that March For Our Lives crowd, demanding that schools be made safe for children showed their true colors on the weekend we remember Reverend Dr. Martin Luther King’s contribution to our country.

The Media has bent over backwards to defend my Parkland Highschool liberal peers, no matter what outrageous things they have said.

But now they have tried to ruin a highschool kid's life, over fake news.

The student was a Trump Supporter. pic.twitter.com/qgZMybHkZd

They view Christians as enemies.

And they view Trump supporters with absolute contempt.

But if you call these same vaunted Media(d) outlets and personalities (the ones who fantasized about violence against fifteen-year-old boys) an ‘enemy of the people’ — you’ve somehow endangered Democracy.

Think about that on this day that scapegoated children who had done nothing wrong have been threatened by so many hateful strangers that didn’t even know they existed a few short days ago, that authorities have kept everyone home to protect them from the evil intent and retribution of any self-appointed ‘social justice warriors’.

Maybe instead of Leftists endlessly telling Republicans to be ‘more tolerant’ they could use this as a ‘teachable moment’ about thier own bigotries and shortcomings.