Democrats ‘tough stand’ against the wall pretends to be about protecting us from Trump’s needless wasteful spending. We’re calling BS on that one.

You need look no further than ‘Citizens against Government waste‘.

With Trump asking for between $5 and $6 Billion to get started on our big beautiful wall, it’s helpful to see what other government projects already approved seem to think that was justifiable. Notice these amounts are higher than the amount wanted for the wall.

“Rural Utility Service.” This program costs taxpayers $8.2 billion/year and has no actual purpose after its original intent — bringing electricity to rural communities — was long ago achieved. It’s now being used to bring broadband access to small communities (usually with populations of less than 20,000). However there’s no indication the “beneficiaries” of this expensive government agency actually appreciate the program and the majority of its projects are not completed on time or within budget.
Sugar Subsidies. America, as Democrats frequently intone, faces a health crisis. What they don’t tell us is that it’s largely of their own making, as Congress subsidizes the production of unhealthy foods like sugar and high-fructose corn syrup. Eliminating sugar subsidies alone would save $6 billion, enough to fund the border wall; it would also have the added benefit of helping curb the nation’s obesity epidemic.
… The United Nations. As the United Nation’s largest contributor, the U.S. in 2016 donated $10 billion to the U.N. As CAGW notes, reducing these contributions just 25 percent would create a savings of $12.5 billion over 10 years. Of the money Congress appropriates for the United Nations, 5 million taxpayer dollars are itemized for abortions in foreign countries.
…Waste, Fraud, and Abuse. The Government Accountability Office estimates taxpayers are spending more than $137 billion annually on “payment errors,” which covers all manner of waste, fraud, and abuse within Social Security, Medicare, and Medicaid. The feds could implement the same kind of fraud protections credit card companies used to ensure against abuse, but don’t. In fact, Congress has gone in the opposite direction, winding down the program intended to police fraud within Medicare, the so-called Recovery Audit Contractor. In other words, Congress is knowingly funding tens of billions of dollars of fraud annually.
Source: Grabien News

Dems are refusing to fund the border wall, so I thought I'd create a list of all the insane things government DOES FUND.

Weirder than ‘genital washing’? and seven figures worth of World of Warcraft? Sure. Maybe. Judge for yourself. 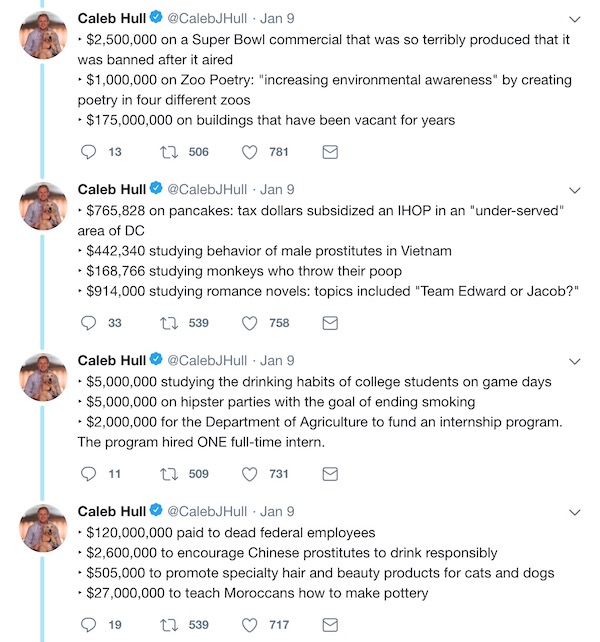 Sure, that all seems like a perfectly legitimate use of tax dollars. 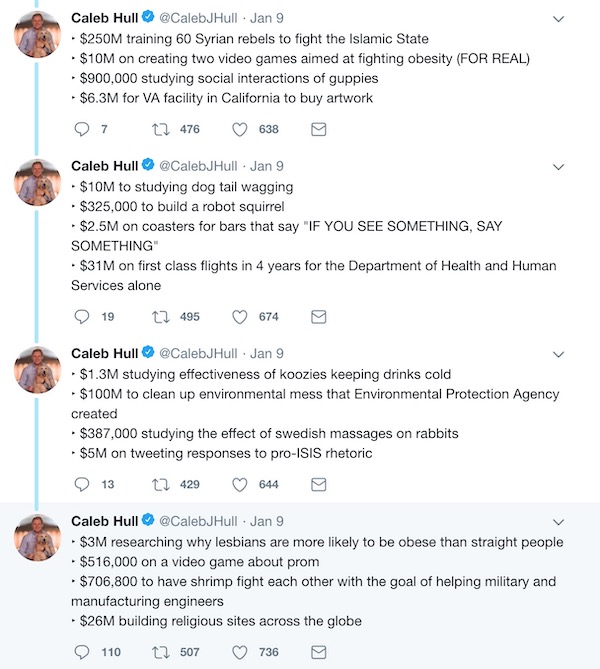 A quarter of a BILLION training SIXTY SYRIAN REBELS? That seems … a little high.

Great job holding that line on Waste, Nancy — wouldn’t want to piss taxpayer money away on anything as nonsensical as the fulfillment of a promise everyone signed off on back in ’06.