The newly-elected Michigan Congresswoman has been pretty cozy with some rather questionable figures.

That moment today at the #ArethaFrankinFuneral when the speaker thanks Auntie Maxine Waters and the whole congregation says "we got your back" and she does Wakanda Forever. #ArethaHomegoing pic.twitter.com/Bqly2b59A8

Palestine is south of Narnia, east of Westeros, and north of Wakanda. Just sayin’.

You remember Rashida Tlaib — she was the foul-mouthed newly elected Congresswoman who was committed to standing up to President Trump by saying that she’s going to ‘impeach the motherf***er’. She also suggested that women should manipulate men by withholding sex.

Tlaib’s closeness with fringe figures like Women’s March and Palestinian activist, Linda Sarsour, her support for the BDS movement (Boycott, Divestment, and Sanctions) against Israel, and other policy positions have made many question whether Tlaib is anti-Semitic.

Rashida Tlaib posing for a selfie with Nihad Awad the founder of a designated terrorist organisation (CAIR). pic.twitter.com/8diVNgnjky

In a recent tweet, Tlaib suggested that Republicans who are supporting anti-BDS legislation have divided loyalties because they ‘forgot which country they represent’.

They forgot what country they represent. This is the U.S. where boycotting is a right & part of our historical fight for freedom & equality. Maybe a refresher on our U.S. Constitution is in order, then get back to opening up our government instead of taking our rights away. https://t.co/KkmqjR58ZM

The Media(D) breathlessly reported that Rep. Tlaib was sworn in on Thomas Jefferson’s 1734 Quran.

It was also noted that the map of the world in Tlaib’s new Congressional office had been ‘fixed’ with a Post-It note replacing Israel with Palestine.

Someone has already made a slight alteration to the map that hangs in Rashida Tlaib’s new congressional office. pic.twitter.com/mwyshIog4r

The Daily Caller has revealed that Rep. Tlaib has much deeper connections to anti-Semitism than were originally believed.

Tlaib is a member of a Facebook group called ‘Palestinian American Congress‘ where members routinely demonize Jews. The leader of the group, Maher Abdel-qader, a Palestinian activist who organized campaign events for Tlaib and was also a key fundraiser for her run for Congress.

There are photos of Rep. Tlaib and Abdel-qader on Facebook. 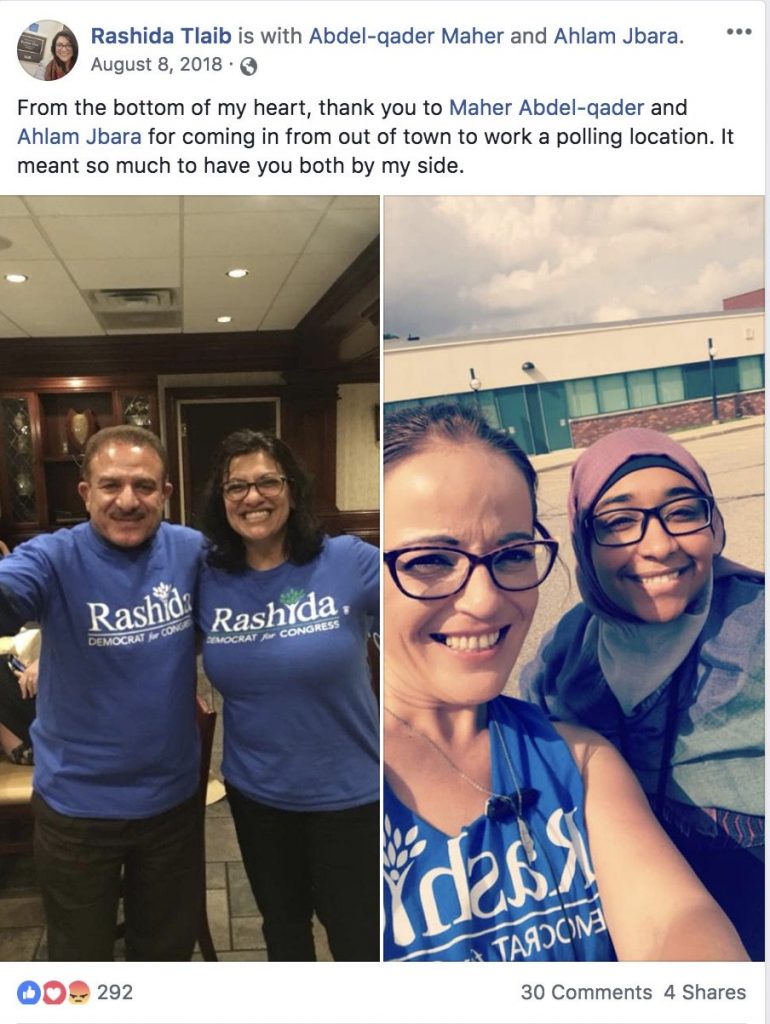 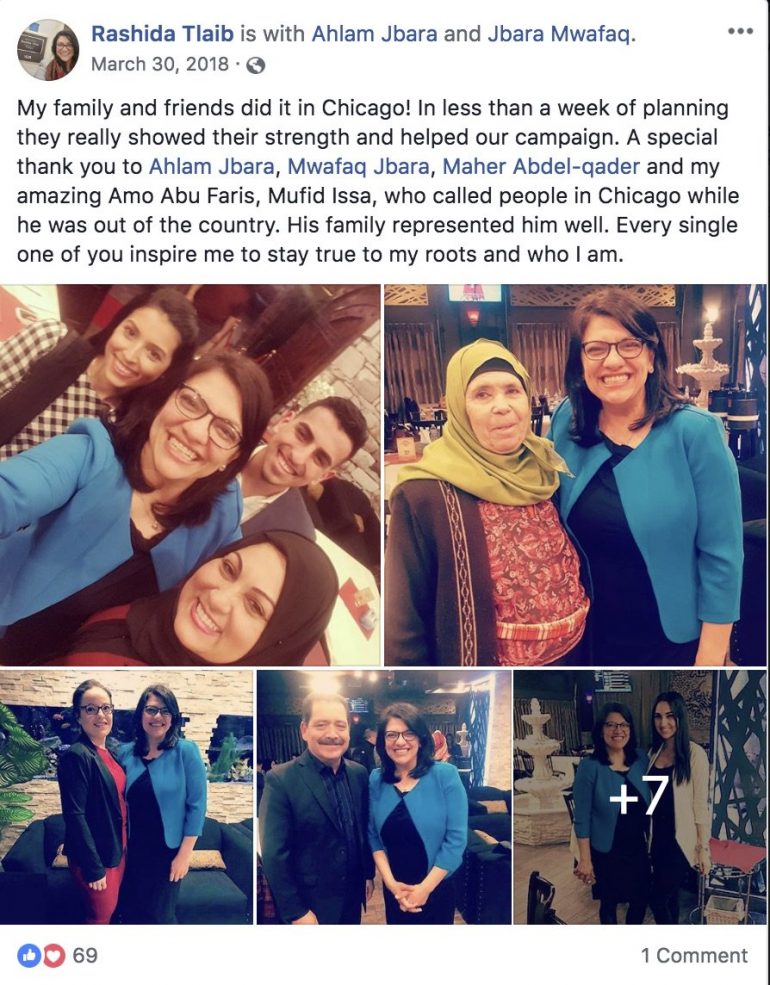 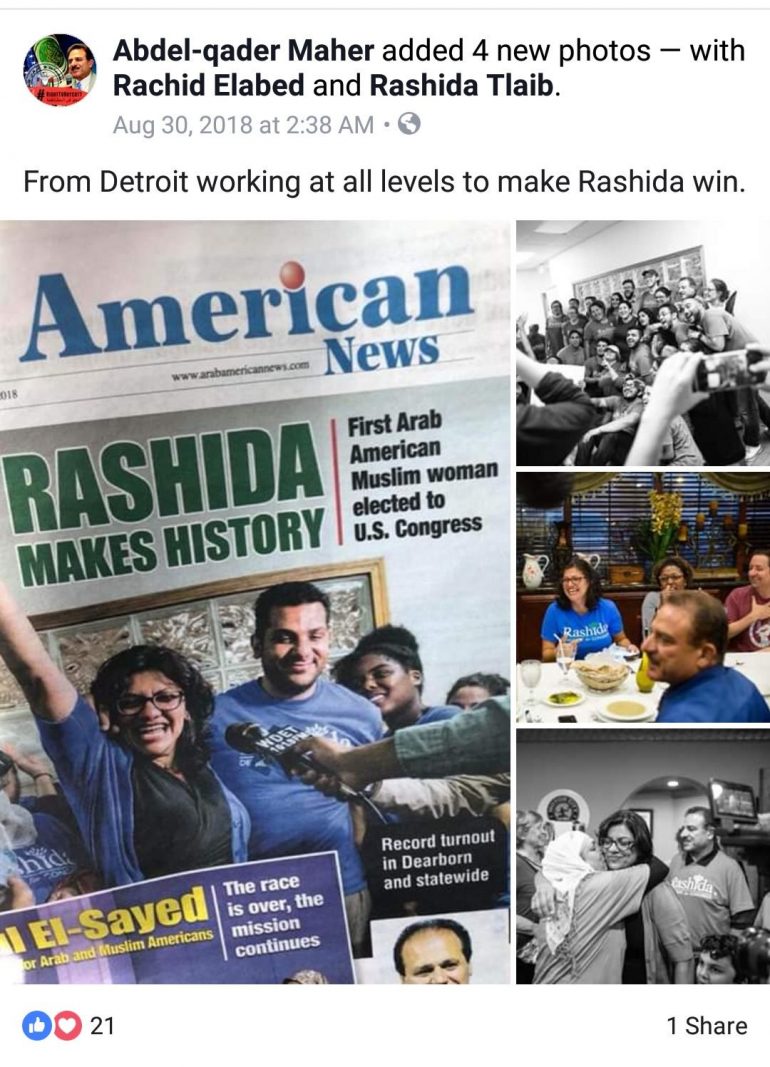 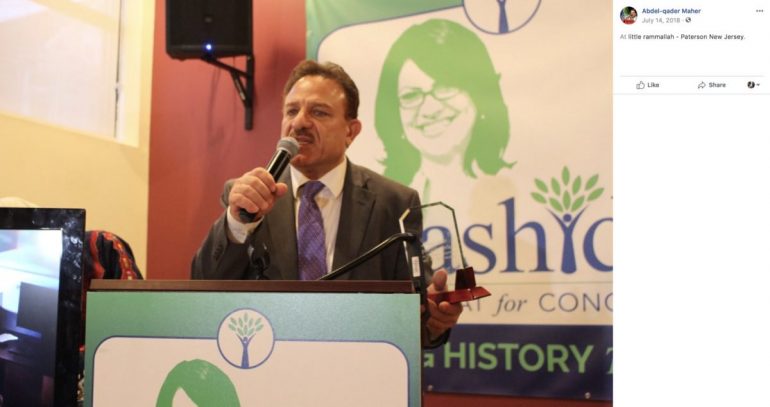 Rep. Tlaib’s buddy posted some disturbingly anti-Semitic things on Facebook. In January 2018, Abdel-Qader posted a video that claims that Jews aren’t actually Jewish and that they invented the historical claim to Israel. It also makes the same tired claim that Jews ‘control the media’. (If that was the case, why would so much be negative press against Israel and the Jewish people in general?)

The video, which described Jews as “satanic,” also questioned whether 6 million Jews actually died in the Holocaust.

“Research the truth about the Holocaust, and you’ll definitely start to question what you thought you knew,” the video’s narrator says.

The video was shared both on Abdel-qader’s personal Facebook page and within the group that Tlaib is now a member of. 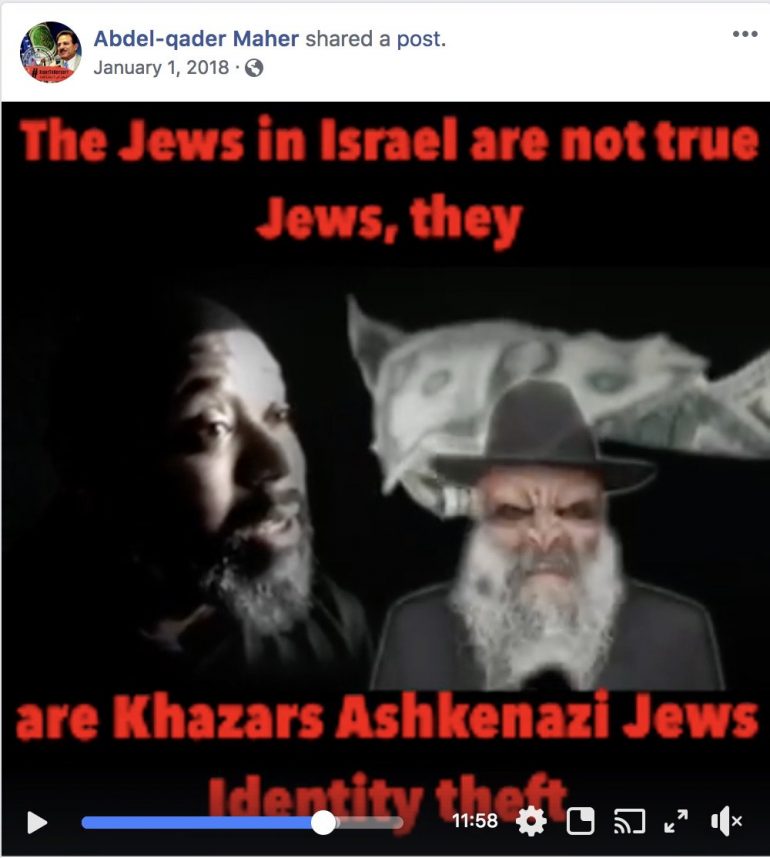 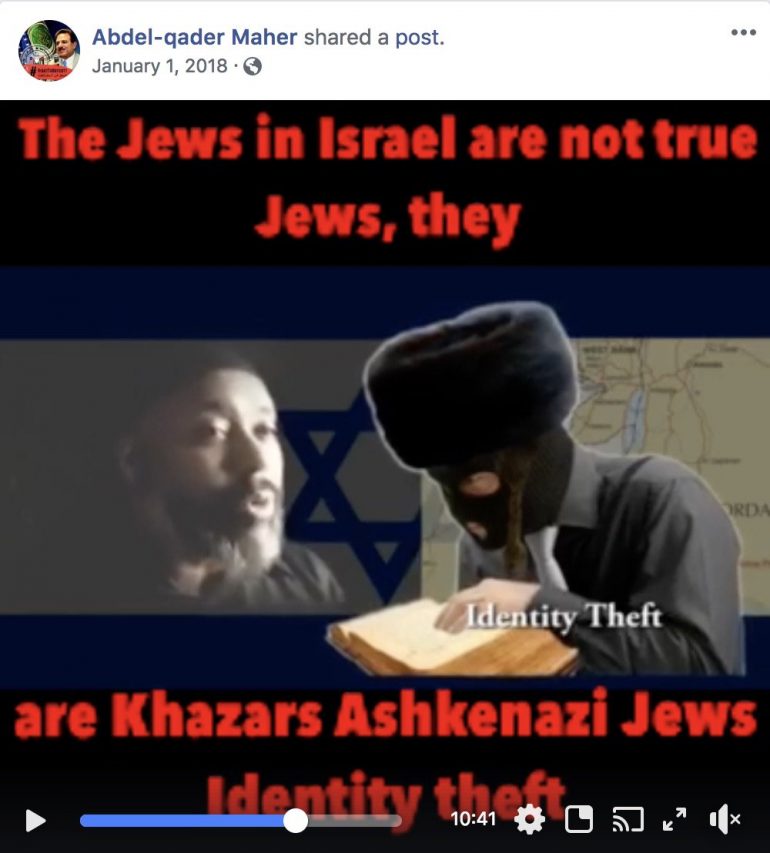 Abdel-qader has taken credit for organizing fundraisers for Tlaib with Arab-Americans which pulled in hundreds of thousands of dollars for her campaign.

After the Daily Caller piece was published, Abdel-qader emailed them to say that the article was ‘fake news’ that he said there were ‘fake Jews’ and to clarify his position.

It was rather… enlightening.

Abdel-qader said he has “great respect for the religion and the Jewish people” in an email to TheDCNF early Tuesday morning after this article was published. Abdel-qader added that there is “no such thing as ‘fake Jews.’” and denied that he ever advocated as much, despite his Facebook posts to that effect.

“What I said, Many Jews living now in the Middle East are the descendants of the great Jewish Khazar empire in Europe,” he wrote, adding: “I stand against Israeli and Zionist brutal occupation and in-humane treatment of Palestinians.  I am for justice for all in the Middle East.”

He declined to answer a question regarding anti-Semitic conspiracy theories about Jews secretly controlling the media.

It’s not just Abdel-qader that is a controversial figure.

Palestinian-American professor Amer Zahr, a supporter of the anti-Israel Boycott, Divestment and Sanctions (BDS) movement, appeared at campaign events and also attended Tlaib’s swearing-in ceremony. Zahr posted a Facebook video he recorded from Tlaib’s office to show that he had re-labeled Israel as “Palestine” on a map hanging in the office.

An article recounting the label change received positive reactions when shared within the “Palestinian American Congress” group that Tlaib belongs to on Facebook.

One group member commented: “They will be wiped off the map soon inshallah [God willing].”

In Rashida Tlaib’s office today, we realized that there was something wrong with the map. So, I fixed it. Rashida Tlaib For Congress #Palestine #FreePalestine #WeAreOnTheMap #Congress #Rashida #RashidaTlaib

Rep. Tlaib was also connected with another Palestinian activist. Abbas Hamideh, a Hezbollah supporter who believes that Israel shouldn’t exist. The left-leaning Anti-Defamation League demanded that Tlaib explain why she was associating with a pro-Hezbollah anti-Semite. Tlaib told the Detroit Free Press on Friday that she didn’t know who Hamideh was.

In April of 2018, however, Tlaib posted a photo of herself with Hamideh on Facebook. 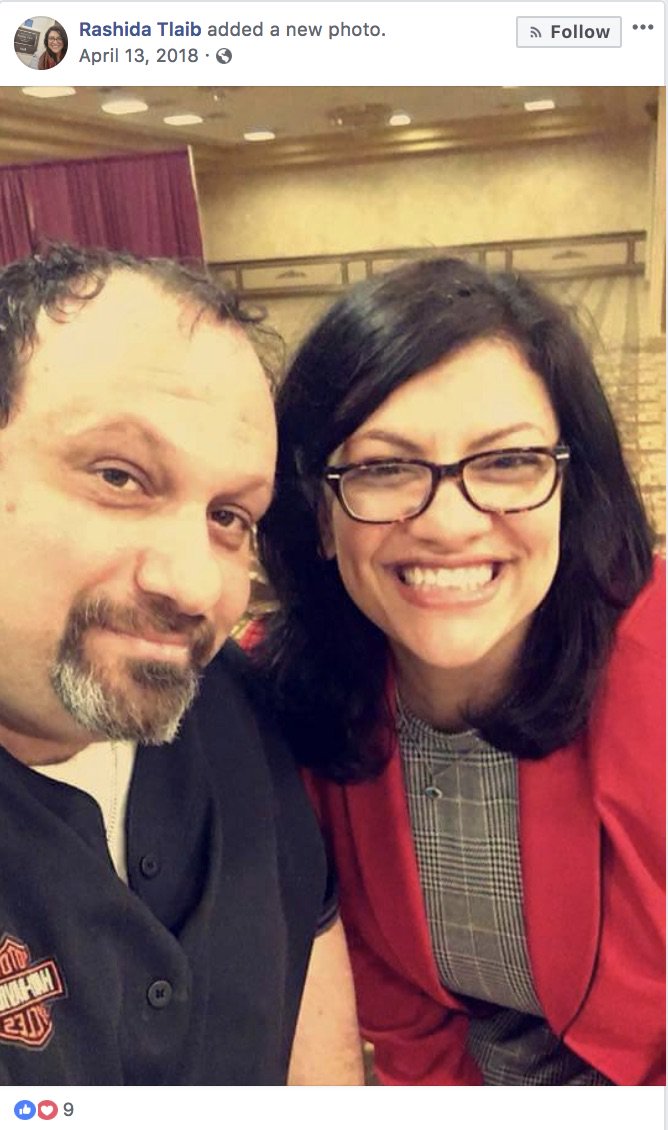 it looks like Rep. Rashida Tlaib is going to be very busy answering questions about her connections.