Would society react differently to this situation if the naked dude was a teacher or priest?

Child Protective Services would be called faster than you could say ‘Munchausen By Proxy — Gender Confusion Edition’.

I’ve written about the so-called ‘Drag Kids’ before in an extensive article on the problems with Drag Culture. One of which is the overt sexualization of children as drag performers.

The article featured a couple of pre-pubescent children who perform as Drag Queens with the blessing of their parents. One of those was a Canadian boy, Nemis Quinn Mélançon-Golden, who is now all of 10-years old and his drag alter ego is named ‘Queen Lactatia’. 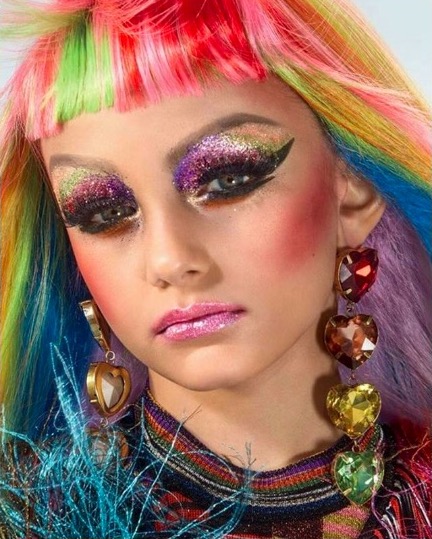 In December there was a big hullaballoo in conservative media circles when it was revealed that an 11-year old boy danced around onstage in Brooklyn gay bar on a Saturday night to the song, ‘I’m Just A Girl’ by No Doubt while dressed as Gwen Stefani and men in the audience threw dollar bills at him.

Of course, critiquing anything LGBTQ+ — even when relating to children — will quickly get you tossed into the favorite catch-all label for anything that isn’t societal deconstructionism by the woke progressive folks on the left. Yes, my friends, you too can be called ‘alt-right’, and all because you disapprove of kids playing dress up, you bigot.

This is about much more than just ‘playing dress up’. The drag community is a highly sexualized one. Drag is known to be the realm of gay men, but not exclusively. The drag performances are stereotypical and satirical behavior that revolve around gender norms. In essence, it’s gay men mocking female behavior. And there are lots of sex jokes.

Seems like a totally appropriate scene for children, right?

As a matter of fact, in a recent article in Huck Magazine, Nemis’s mother, Jess, admits that there are some sexual references in drag, but she censors things. However, in her assertion that she wouldn’t overtly sexualize her child, she admits that she’s fine with whatever he wears if it makes him feel ‘beautiful’.

“Drag is an adult arena and that’s where people question our judgement,” concedes Jessica. “So we have to censor things. He knows there are adult aspects of drag that he’s not allowed to apply to his show.”

“We would never try to overtly sexualise our child. But if he wears something that makes him feel beautiful, what right do I have to stop him wearing that dress because it might cause people to think things they shouldn’t be thinking? It’s a circular problem.”

‘What right to I have to stop him?’ she asks.

The right of being his mother.

But it seems that Jess isn’t so great at censoring things after all.

Let’s hope that Nemis doesn’t feel ‘beautiful’ in ‘fetish stripper boxer briefs’ which are available from House of Mann.

What, do you have a problem with a 9-year old modeling a onesie for a company that sells ‘vegan leather harness jackets’? Well, obviously the problem is with you and not with the child’s parents.

Watch as he models the onsie and is handed dollar bills by gay men at RuPaul’s DragCon. Then, he and his mom explain how those that have trouble with this behavior are the real problem:

But Nemis and his mom, totally tolerant. That’s why they want to smash the patriarchy.

Choose Love. Be Proud. Smash the Patriarchy and be kind to one another, always! #pride???? #lovenothate #loveislove #nonbinary #thefutureisfluid

Yes, kiddies, if you look at his Instagram account, Nemis appears to be a full-on LGBTQ+ activist.

The aforementioned Huck magazine article was a profile on Nemis and how amazing he and his mom are. It also includes the ‘highs and lows’ of being a ‘Drag Kid’. The photographer for the Huck spread was Jonathan Frederick Turton, and he captured one troubling image that didn’t make it into the magazine. It was of Nemis dressed in full drag standing next to Violet Chachki, the winner of RuPaul’s Drag Race Season 7, in full makeup and wearing high heels, jewelry and a carrying a purse, but with only a small bit of cloth to cover his genitals.

The photo was posted to Nemis’s Instagram account, as well as that of Turton, but both have since been deleted. 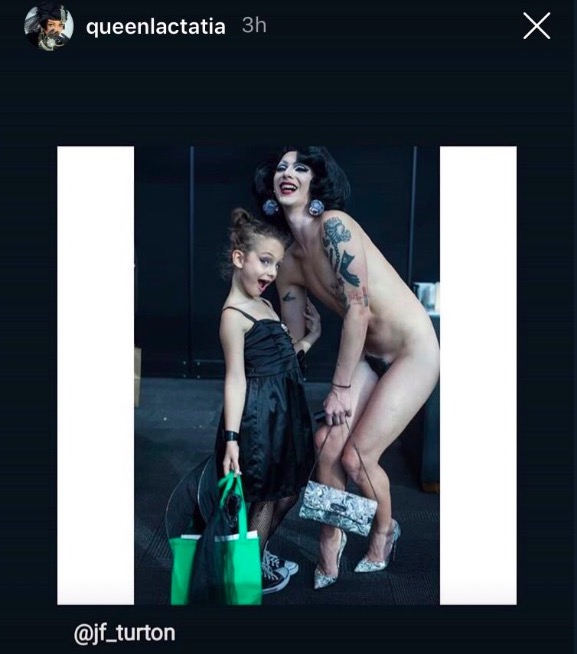 I guess they realized that the image was actually inappropriate.

What is so disturbing is this pose that pre-pubescent Nemis is taking in the shot. It looks like those outrageously racy Microsheen shoe polish ads from the 1950s. Maybe it’s just me, but that photo simply doesn’t look very innocent.

Imagine just for one second what the reaction would be if that had been a 10-year old girl touching a naked Catholic priest’s arm like that.

That would have a child removed from the home and an investigation was started within minutes of the photo being posted.

His mother posted that photo.

And we’re all supposed to trust her judgment on things? I don’t think so, lady. This is why we have things like Child Protective Services, to ensure that children are not being neglected, exploited, or abused.

The fact that it was posted to Social Media(D) with no real concern until the backlash occurred just shows how blind these people are to what is and is not appropriate for children.

Heck, I’m old enough to remember when child beauty pageants were seen by many people as crossing over that creepy line. There was outrage when a company used young girls to advertise a portable ‘gym pole’ for the backyard.

But this is just drag — so it’s ok because it’s cross-dressing, not swinging around on a stripper pole.

Interesting in these #MeToo times where consent is the primary concern, children are being allowed into overtly sexualized spaces with the blessing and encouragement of their parents. What happened to children can’t give consent? In a few years, that photo could easily be Nemis’s #MeToo moment. It was splashed all over the internet because it was posted by his mother. What happens if he decides that he doesn’t want to do drag anymore? What if he’s embarrassed by it? These pictures are everywhere — the internet is forever.

It’s amazing to me that the left is out there celebrating these kids as some sort of civil rights heroes when their parents seem just fine with them being sexualized and used by the LGBTQ+ activists.

It really needs to stop.