This Hollywood director seems to think that Black History Month means that you should target successful individuals for their ‘white privilege.’

Ava DuVernay, Oscar-nominated director of the movie, Selma, is giving some lessons on white privilege on Twitter.

She said that it’s ‘hard for white folks to grasp the notion of white privilege‘ so she’s going to educate the ignorant masses with her Superior Intelligence and Wisdom™.

DuVernay did this in an interesting way — she targeted the First Lady for the infamous British GQ photo shoot, then, Liam Neeson for feelings he had 40 years ago, and finally, she invokes the Social Justice martyr, Trayvon Martin.

Sometimes it’s hard for white folks to grasp the notion of white privilege. My three posts below are real world, easy examples of how the system we live in favors some and not others. If you’d like to acknowledge Black History Month in some way, recognize this within yourself. ????

She launched her lengthy spiel by targeting the First Lady.

‘When people ask me what white privilege is… Imagine what would happen if this was Michelle,’ she wrote on Tuesday, sharing a picture of Melania from her modeling days wearing a very revealing top that nearly exposed her chest.

She argues that Melania benefits from white privilege in that she can have risqué modeling pictures and not face harsh criticism for it, whereas if Michelle Obama had posed for such images, it would be a very different story.

Here are her three examples.

(Screenshots for posterity. You know how these posts sometimes disappear.) 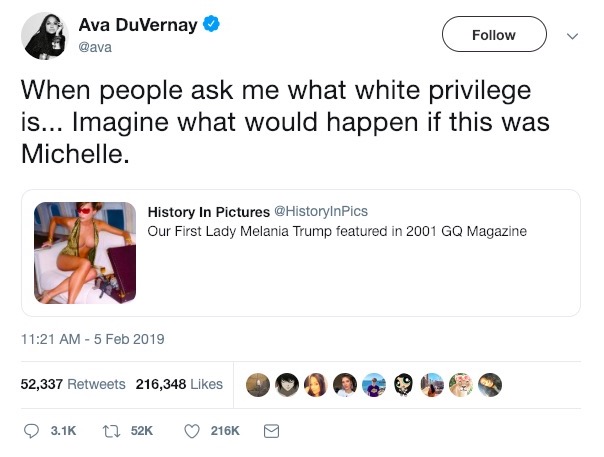 Where to begin with this one…

First, can we all agree that ‘tasteful nudes’ have been a staple in art since time immemorial? And that men’s magazines have exploited the ‘tasteful nude’ concept and seem to have a penchant for sexualizing women? How about ‘high fashion’ tends to paradoxically mean fewer clothes?

Second, let’s all just acknowledge that Melania won the genetic lottery. She’s just naturally gorgeous. I highly doubt that Michelle could have achieved a comparable level of success that  Melania did as a fashion model. That’s not dissing Michelle, there are many women that simply couldn’t. Whatever your feelings are about Michelle’s looks, (and there’s a huge range there,) let’s just admit that she’s not quite in the same caliber. It’s like comparing apples and bananas, one might say. At the same time, the perma-scowl at all things conservative that Michelle often wore didn’t help her win friends and influence anyone on the center to right side of the political spectrum.

The same people that decry these photos of Melania Trump applaud beautiful, Hollywood actresses to ‘own their sexuality’ by posing in much less for magazines like Playboy. They also applaud overweight and/or unattractive women like Amy Schumer and Lena Dunham stripping down naked because they are somehow ‘brave’. No, they want attention. From men. For sex. Because — feminism.

Incidentally, the left was breathlessly praising abusive and controlling scumbag, Hugh Hefner, after he died in 2017 and would have bestowed the equivalent of secular sainthood on the man who offered ‘thigh-openers’ (Quaaludes) to women he had just met.

I swear, if Leftists didn’t have double standards, they wouldn’t have any standards at all.

Next up, for chastisement by DeVernay — Liam Neeson.

She then turned her attention to Liam Neeson, who has recently come under fire after he revealed he had a ‘primal urge’ to ‘murder a black b*****d’ after a loved one was raped by a black assailant.

While the instance took place 40 years ago and Neeson has clarified he realized he was in the wrong, many have labeled him a racist, which he has vehemently refuted.

His incendiary remarks led his New York red carpet movie premiere for his latest film Cold Pursuit to be cancelled. 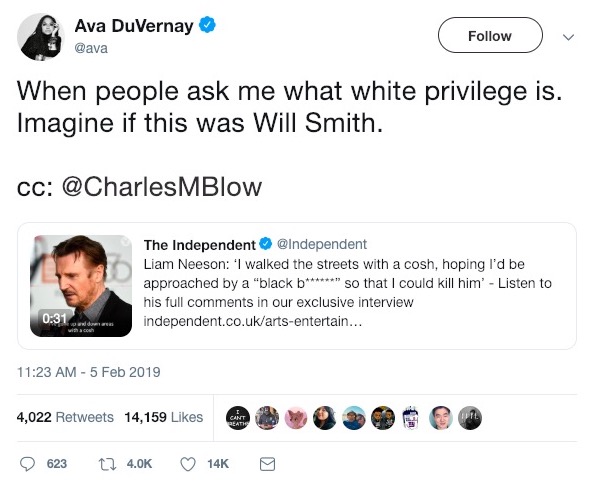 Neeson’s comments were horrendously racist in that they generalized and put people into little identity boxes instead of treating them as individuals. This is the same bigotry that breeds ‘white privilege’ accusations. It was wrong 40 years ago, and it’s still wrong today.

To his credit, Neeson acknowledges that he hated that ‘primal urge’ that he felt to protect someone against an outsider, and he went to a priest for confession. It was also 40 years ago. Can we admit that people can change in the span of 40 years, or are we all just static beings that can never grow as our experience with the larger world expands?

And then, the coup de grâce, she brings up Trayvon Martin. 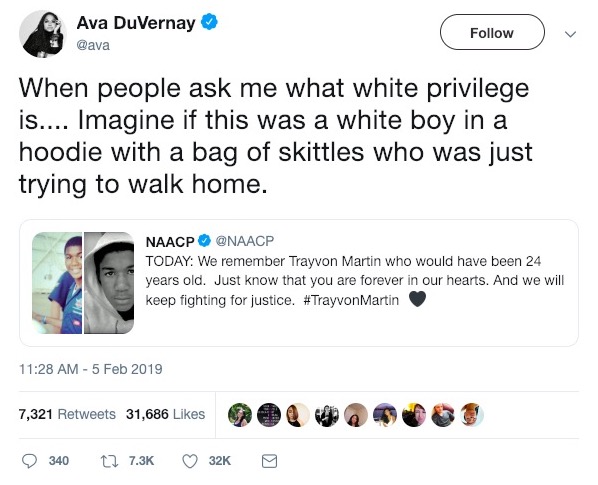 Yeah, except that he wasn’t exactly the innocent little teen as it has been repeatedly claimed. His social media was scrubbed and the photo that they used was of a much younger and more sympathetic Trayvon.  A pathologist supported George Zimmerman’s account of events stating that it was consistent with both Zimmerman’s injuries and his claim that Martin was on top of him when he was shot.

In summary, she’s saying that if a white boy in a hoodie, with drugs in his system is smashing someone’s head against a sidewalk and that kid gets shot in self-defense, there wouldn’t be marches in the street supporting the ‘innocent teen’.

I actually think that she’s right about that.

It just takes a second, but stop and think before you tweet.