Police can’t be everywhere at once. They have to prioritize cases. But what should those priorities be?

Last week, a Chicago case made headlines because it had a Hollywood Connection.

Jussie Smollett is a gay actor playing a gay character on ‘Empire’.

Some of our readers probably couldn’t pick they guy out of a police lineup with Goldilocks and the Three Bears. So let’s get up to speed: This past week, he lit up social media with claims of having been targeted for attack by … wait for it… Trump supporters.

There was an elaborate story with a lot of details not easily confirmed or falsified. It had all kinds of over-the-top drama (the kind that sounded so implausible that it was immediately mocked on social media as a crazy story), and many people immediately cried ‘hoax’.

Police are busy chasing leads and seem to be turning a lot of resources to that story.

The ‘MAGA’ angle seemed a little too convenient and we’ve seen enough previous claims turn out to be hoaxes that we’re skeptical from the word ‘go’. But don’t take our word for it, here are a few examples:

POP QUIZ: Guess How Many HOAX ‘Hate Crimes’ There Have Been In The Past Decade?

You might say you came by that skepticism honestly. So when I saw the buzz around this Smollett story, which could be legit — but sure has a lot of loose threads making it look sketchy — something didn’t seem right about it. So we did a little digging — easy stuff that any news network could have found on the old Google machine — and turned up an interesting figure.

What does that number represent?

Chicago’s crime problem is made worse when murders like the wave that gripped Chicago last weekend go unsolved.

CBS 2’s Derrick Blakley reports that while other big U.S. cities have shown improvement in arrests, Chicago lags behind.

…So far, the addition to the police force hasn’t helped.

The Smollett story is getting weird.

Will it be a great comfort to the families of those murder victims that police are very Publicly persuing leads on the guys who may (or may not) have been targeted with a ‘hate crime’?

#ChicagoPolice source tells @fox32news that #JussieSmollett was seen on surveillance still holding his #Subway sandwich when he returned to the building after the alleged attack.

Or does this seem like a little bit of elitist #HollywoodPrivilege?

Our handy-dandy Chicago violence resource — HeyJackass — is helping us out again here. 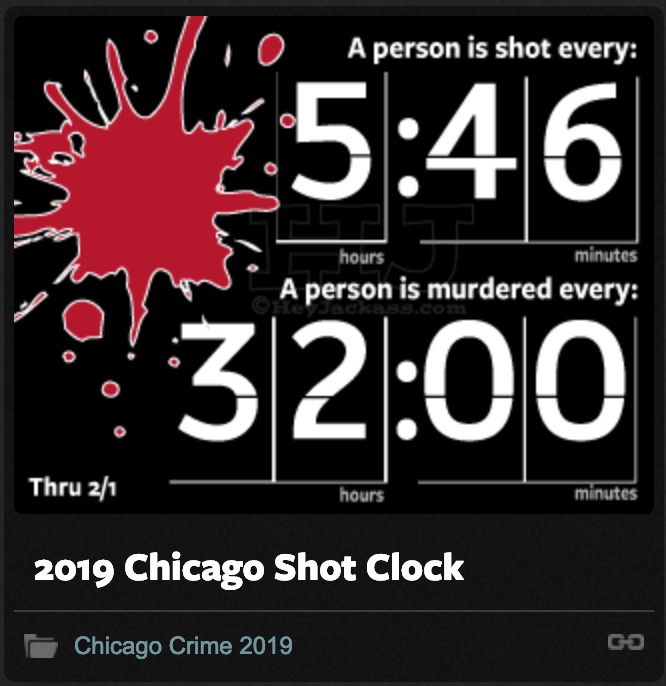 Almost one a day. The January total rings in at: 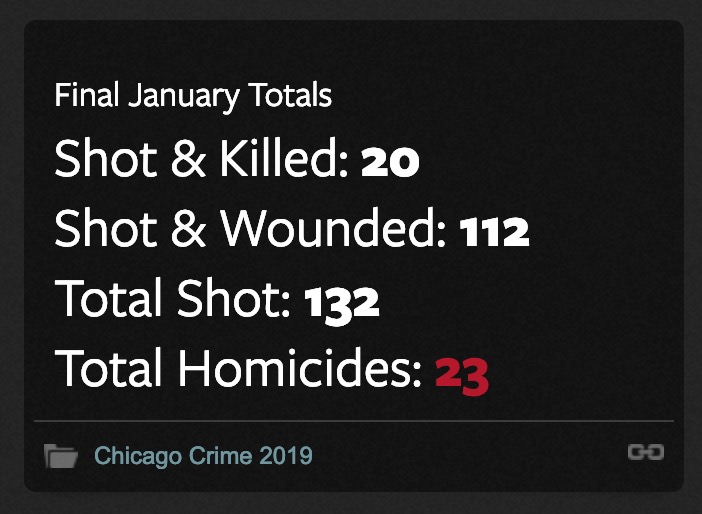 And in the week that they’ve been chasing this story? 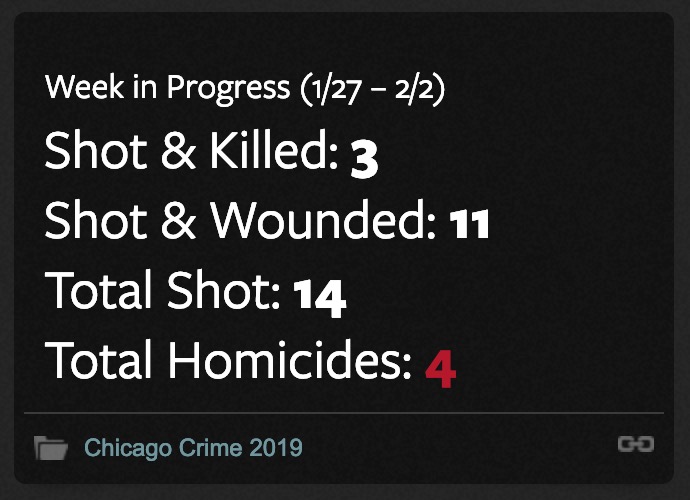 It isn’t clear how much energy and police resources have been dumped into this case relative to any others. But let’s put it this way: have you seen any videos asking for help solving murder cases? Or just a fairly nondescript shot of two people walking on a bike path?

We know the name of the celebrity who says he was targeted for specific abuse by Trump supporters because he’s gay, with reports of broken ribs, bleach, and a noose.

But he still had his snack in his hand, even after having bleach dumped on him?

And can we name any of the victims who have been murdered there since January 1? Have we seen any broad appeals for leads on suspects? Or do Hollywood victims get special attention? #HollywoodPrivilege

According to the police statement, two men approached the 36-year-old and “gained his attention by yelling out racial and homophobic slurs toward him.” Per the police, the two men beat Smollett, poured an “unknown chemical substance” on him (bleach, according to TMZ) and “wrapped a rope around the victim’s neck.”

The men, both of whom wore ski masks to cover their faces, allegedly shouted, “This is MAGA country,” a reference to President Donald Trump’s 2016 campaign slogan, “Make America Great Again.” Police have not confirmed those specific details and a Chicago Police spokesperson told The Daily Beast there was “no report” of MAGA taunts from the attackers.
Source: TVGuide

Smollett has since affirmed the claim that the alleged attackers referenced MAGA during the alleged incident.

It’s a tough job they’ve got. What would you say to the Chicago police?