Things are not looking so good for Empire actor, Jussie Smollett. Here’s the 411…

The breakdown of the oh-so-convenient narrative of ‘racist Trump supporters’ waiting out in the middle of the night with bleach and rope during the polar vortex in order to attack a black, gay actor is pretty spectacular. It turns out that it was actually the actor fabricating a hate crime to show how racist America is in 2019. Now that it’s being exposed, TMZ reports that Smollett’s role on Empire has been slashed.

Did Empire Star Fake A ‘MAGA Homophobic Hate Crime’ To Save His Job?

VIDEO: Watch This Montage Of ‘The Media’ Believing Another BOGUS ‘Hate Crime’ Story

According to Olabinjo and Abimbola Osundairo, two Nigerian brothers now cooperating with Chicago police, Smollett had paid them to commit the attack.

Look at that — Smollett had to hire immigrants to do the work that Americans won’t do. That just goes to show you the state of race relations in America right now that a successful gay, black actor (who was rabidly anti-Trump, by the way,) had to hire two Nigerian guys to fake a racially-motivated attack in order to prove how racist it is in Trump’s America.

That is just a beautiful example of the lengths that leftists will go to smear their political opponents.

The case is headed to a Grand Jury next week after the brothers came forward saying that they were paid $3,500 in advance by Smollett to commit the attack and then lay low in Nigeria for a while with another $500 upon their return to Chicago.

Page Six reports that some of the details of his ‘attack’ had eerie similarities to a play that Smollett had auditioned for just hours earlier in New York. They also note that Smollett’s Instagram posts about his flight to Chicago being delayed may have been to alert his Nigerian accomplices to wait for his signal. The brothers had worked as extras on Empire, and one had been Smollett’s personal trainer.

In the hours before the violent Jan. 29 assault in Chicago, the “Empire” star was in New York City for a day of readings for a possible revival of “Take Me Out,” sources told the Daily Mail.

The Tony-winning production follows a biracial baseball player who is attacked by a pitcher — and called a “n—-r” and “f—-t” — after coming out. The characters compete on a team called the New York Empires.
Source: Page Six

He wasn’t even creative in faking his own hate crime. That’s pathetic.

It was also being reported that there were two possible motives for faking the attack. The first was that his character was being written out of the show, a claim that Fox had denied several days ago. The second possible motivator was that he was upset that a threatening letter with a ‘white powder’ that was sent to him at the Fox studio didn’t garner enough Media(D) attention.

The Osundairo brothers are now saying that Smollett was the one who orchestrated the sending of the letter as well.

The two brothers at the center of the Jussie Smollett investigation told police that the Empire actor helped create the threatening letter he received at his studio, a week before the alleged attack, according to reports.

Unnamed law enforcement sources told ABC earlier this week that Smollett hired the two men, Ola and Abel Osundairo, as part of the staged attack after the letter that he received on the set of Empire did not get a ‘bigger reaction.’

On January 22, one week before the ‘attack’, Smollet and his producer used gloves to open a letter addressed to him and sent Chicago’s Cinespace Studios where Empire is filmed. The envelope was written in red marker with a return address ‘MAGA’. The letter itself had cut out magazine letters pasted to read, ‘you will die black f*g‘ alongside a crude drawing of a man with curly hair like Smollett’s being lynched with a gun shooting at him. It also contained white powder and a HAZMAT team was called in. They determined that the suspicious powder was simply crushed aspirin.

Among items taken from the brothers’ home during a raid last week was a magazine but it remains unclear if it is the same one the letters came from.

Chicago police also seized a book of stamps from one of the homes, according to the TV station.

The FBI and the United States Postal Service are now analyzing it.

Smollett did not post on social media about the letter and it was unknown until after the January 29 attack when a photograph of it appeared on That Grape Juice Net.

The letter is being investigated by the FBI, and the sender could receive 5 years in jail for sending threatening communication through the mail. The kicker is, even if Smollett did it himself, which is one possibility that investigators are looking into, he could face jail time for his actions.

Smollett didn’t mention the letter on social media but confirmed that he received it during his Good Morning America interview:

Smollett says that he punched back at his attackers. Looking at those guys, it seems to me that he would end up a bit more dinged up if they had both smacked him around as he claimed. Those bros are huge.

Smollet has denied that he orchestrated the attack, that he paid the brothers $4000 to commit it, and his siblings are now saying that he is being ‘vilified by an irresponsible media‘ by spreading claims that the attack was a hoax.

Remember who this guy is and why conservatives were so skeptical when the attack was first reported. It was just a little too convenient.

He called President Trump a ‘national disgrace’ with ‘hooded cohorts’ and his supporters ‘clowns’ while praising the new ‘fresh face’ in Washington, Rep. Alexandria Occasional Cortex.

.@AOC is only speaking facts. This is so far beyond political party affiliation. Across the world…no matter the border…from sea to shining sea…45 and all his white hooded cohorts are a national disgrace. And if you support them…so are you. Clowns. pic.twitter.com/Qz4uIjF7xa 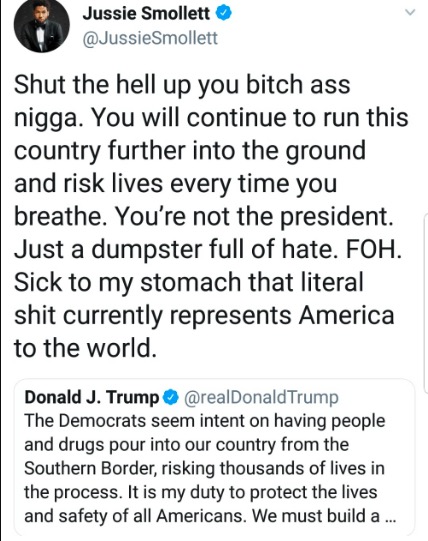 It’s interesting that Rosanne Barr’s career was completely destroyed for a tasteless tweet, and Kevin Hart can’t host the Oscars for a decade-old joke, but Smollett is still on Empire. #LeftistPrivilege