Can someone save us all some time and make a list of things that AREN’T racist?

Whatever would we do without their watchful vigilance? These people have far too much free time on their hands.

Seemingly in response to that, the censors have leveled their cannons at a Hollywood. Now a Disney favorite has fallen under the dour glare of the racism police.

No, it’s not ‘Song of the South’. There are no tar-baby references in this story. But there are Chimney Sweeps, and a ‘blackface’ reference.

You guessed it. Dear old Julie Andrews is getting ‘the treatment’.

Most people would take the movie’s ‘blackface’ as a reference to — you know — working the dirtiest of blue-collar jobs in London.

But one Professor sees a ‘deeper meaning’. Running away from the Nazis in Sound of Music wasn’t enough to save Julie Andrews. She’s being called out for some ‘racist’ behavior in the following scene:

The classic family film Mary Poppins has been branded racist by a US academic who accuses Dame Julie Andrews of ‘blacking up’ with soot while dancing with chimney sweeps.

In a piece for the New York Times, Professor Daniel Pollack-Pelzner criticizes one of the film’s iconic moments, when Mary Poppins joins Dick Van Dyke’s Bert to dance on a rooftop for the classic song Step in Time.

He writes: “When the magical nanny (played by Julie Andrews) accompanies her young charges, Michael and Jane Banks, up their chimney, her face gets covered in soot, but instead of wiping it off, she gamely powders her nose and cheeks even blacker.”

“This might seem like an innocuous comic scene if Travers’s novels didn’t associate chimney sweeps’ blackened faces with racial caricature. “Don’t touch me, you black heathen,” a housemaid screams in “Mary Poppins Opens the Door” (1943).”

“When the dark figures of the chimney sweeps Step in Time on a roof, a naval buffoon, Admiral Boom shouts, “We’re being attacked by Hottentots!” and orders his cannon to be fired at the “cheeky devils”.

“We’re in on the joke, such as it is: These aren’t really black Africans; they’re grinning white dancers in blackface. It’s a parody of black menace; it’s even posted on a white nationalist website as evidence of the film’s racial hierarchy.”
Source: Standard

Why not whine about picking on the mentally ill, while you’re at it, since the admiral is obviously quite addled in his mind, most likely from PTSD. How dare they mock a veteran that way.

Seriously, how DOES one get through life with a stick lodged so far up their –?

But I digress. Back to the issue at hand. We’re offended at a classic movie released in 1964. Seems a little late to get upset by it, don’t you think? This writer wasn’t even BORN yet, despite having adult kids.

Maybe if we weren’t so busy getting offended, we could actually learn some useful life lessons from our art.

Like the “Song of the South”. People are so busy being offended by the racism of the ‘Tar Baby’ story that they miss the life lesson the story was trying to tell. 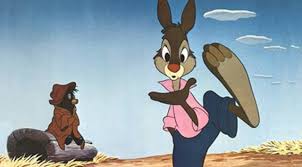 You know, the one about not picking unnecessary fights just because you’re easily offended?

Seems like that’s still a life lesson that would be worth repeating these days… one way or another.

Kayleigh McEnany Slams Jen Psaki, I Didn’t Do A “Ton Of Circling Back”
March 8th, 2021 The Lid

9 Signs That Chess Pieces Are Being Moved Into Place For A Major War In The Middle East
March 8th, 2021 DC Clothesline