A spokesman for the office of the Chief Administrative Officer of the House confirmed that the email address was given at the request of AOC.

David Boyle, who works in the administrative office told Fox News, ‘From time to time, at the request of members, spouses and partners are provided House email accounts for the purposes of viewing the member’s calendar.‘

On Friday, a conservative political analyst tweeted out the information which caused a big hullaballoo on Twitter and had AOC defending her actions.

The democratic socialist waded into the issue in response to a tweet alleging boyfriend Riley Roberts had been put on staff. The tweet included a screenshot of an official House email address. Ocasio-Cortez insisted that he was only given the email account so he could access her calendar.

The tweet quickly went viral and AOC responded about an hour after it was posted.

While you were having a nice Valentine's Day, @AOC decided to put her boyfriend on staff – drawing a salary on the taxpayer's dime. Nice to see her adapting to the swamp so quickly. pic.twitter.com/bvncwzxY53

He's the tall fellow with the beard in the back. You can read all about their romance in this Marie Claire puff piece. https://t.co/Q2CTWRtlGG pic.twitter.com/pAAORhgtYn

Actually this cal designation is a permission so he can have access to my Google Cal. Congressional spouses get Gcal access all the time.

Next time check your facts before you tweet nonsense.

I’d also like to know, if he’s not a government employee, in what capacity he’s doing government work. Are you having campaign volunteers handle duties in your official office?

Ocasio-Cortez’s chief of staff, Saikat Chakrabarti, jumped into the conversation stating that Roberts was not employed with the office, nor was he a volunteer.

He’s not paid. We have no volunteers in the office. He’s not doing any government work. He can see her calendar just like spouses/partners/family members in other congressional office. Check your damn facts before you report bullshit. Lazy journos need to learn to do their jobs.

Riley Roberts is listed as the Head of Inbound Marketing for Homebinder, a website that helps organize home maintenance. As a matter of fact, Homebinder is hiring in Massachusetts. A full-time sales rep job is needed at a salary of $40K with a projected commission of $15K.  Not too shabby for a sales gig. 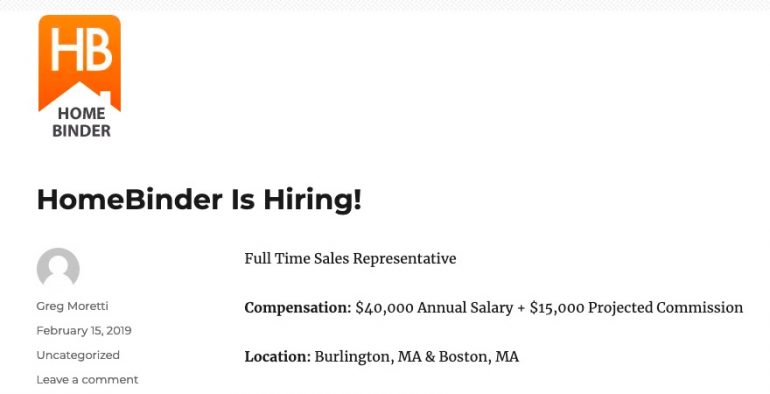 After being elected, AOC had whined that she didn’t have enough money to get rent an apartment in D.C. because she wouldn’t get paid until after she was sworn in. Roberts and Ocasio-Cortez shared an apartment in NYC, and he’s moved with her to D.C. I’m thinking that his salary is likely more than that $55K for a full-time sales representative at Homebinder. I guess we can deduce how the ‘strong, independent women’ solved her housing issue. Her politics makes sense now, too — just have someone else pay for it. Now that AOC is pulling in a Congressional salary of $174,000, (which is quite the jump from her previously reported income of $26,600,) they’ll be living pretty comfortably, I would think.

Chakrabarti was handling the social media fires from the conservative blue-checkmark crowd that got wind of the tweet about the email address.

He's not on staff/not paid. Spouses and partners normally get https://t.co/oqBCENJjNX e-mail addresses for the purpose of getting calendar access.

Luke Thompson shot back suggesting that AOC and Chakrabarti aren’t being truthful.

Seems a bit fishy with that ‘restrictions – none’… but what do I know about these kinds of designations?

How about we ask a former elected official about the rules? Maybe someone who knows a thing or two about rules regarding email and whatnot.

What about the former Chair of the House Committee on Oversight and Government Reform? That seems like a good source.

“It’s totally naïve and inappropriate – you wouldn’t allow it in most companies, let alone the House of Representatives. There should be real consequences,” Chaffetz told Fox News.

“When I was in the House, my scheduler would forward my wife my schedule once a week. But you’re not allowed unfettered access. And he isn’t even her spouse,” he added. “… It should be referred to the ethics committee for further investigation.”

Having handled the investigation into Hillary’s emails, Chaffetz is sure to be cautious over who does and does not have access to potentially sensitive information.

Let’s not forget that the Democrats haven’t exactly been great with keeping digital information out of the wrong hands. Debbie Wasserman Schultz kept on her sketchy Pakistani IT guys even after it was clear that they had hacked into the email of Democrats in Congress.

House IT rules generally prohibit the use of “the House’s electronic mail systems and resources” by unauthorized members, and only “U.S. House of Representative Members, Officers, Employees, Fellows, Interns and Contractors” with appropriate permission can use the system. Still, O’Boyle cited the practice of sometimes allowing spouses access.

Chaffetz said that Roberts having email access could also create other security issues and the matter should be referred to the Capitol Police for further investigation.

“Being given a password to get into the House computer system has other potentially problematic issues,” he said.

Is AOC giving her boyfriend a Congressional email address a big deal or a nothingburger?

Is AOC Giving Her Boyfriend A Congressional Email Address A Big Deal Or A Nothingburger?

After Seeing Kids Playing Basketball with Milk Crate, Officers Go Above and Beyond to Get Them Real Hoop
June 23rd, 2021 Flag And Cross