Calling Trump ‘literally Hitler’ and dogpiling on the Covington Kids was A-OK, for the Media(D), but heaven help anyone who dares dump on their ‘precious angel’.

The media is all for free speech when someone calls Trump a series of obscenties. (like, Rosie did in her Twitter spats with our President back when anyone still cared), or when Peter Fonda daydreams on social media about locking Trump’s young son in a cell with a pedophile, or when Madonna announces to a mob — sorry, ‘crowd’, sometimes it’s tough to tell the difference — that she’s given a lot of thought to blowing up the White House.

All of those things are Muy Bueno.

But do not lay a finger on the media’s anointed. They’ll bite it off.

One Texas city councilman learned that the hard way when he mocked the queen of the ever-so-mockable Green New Deal.

He called her a ‘bimbo’ and empty-headed. 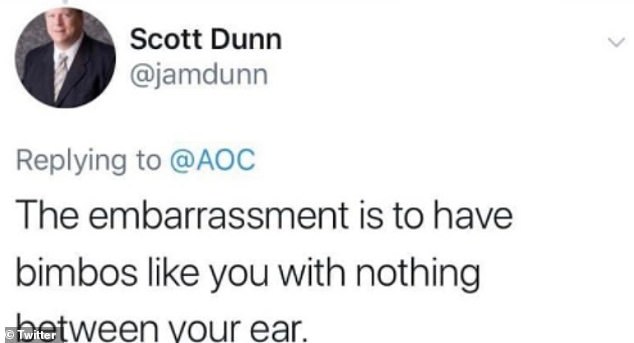 Notice the tagline of who tattled on him… a political operative with a screen name of ‘time for a change 2018’. Whatever might his political affiliations be? 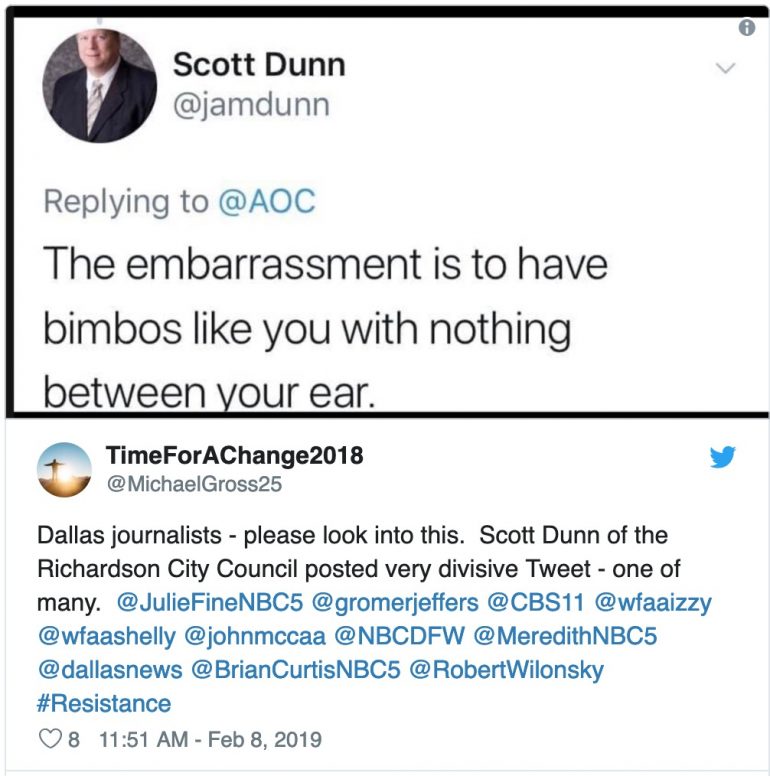 The same media that has somehow been as-yet unable to pin down key Democrats on whether their official positions concerning Fairfax and Kavanaugh are compatible? Or where they come down on partial-birth abortion?

Punishment on social media was swift and ruthless.

Now both the tweet and his entire Twitter account have been deleted, but the Dallas Morning News is reporting that Dunn has apologized on his public Facebook page and said that his words were written “in defense of the President” and his recent State of the Union address.

“I am responsible for my own words and actions. I apologize to anyone who finds what I said offensive,” he wrote.

That Facebook page is now private after it was inundated with comments.

The mayor of Richardson City said he has spoken to Dunn about his words.
Source: 1010Wins

He said something derogatory… to a Democrat!