Next time someone tells you that getting old dooms you to life in a rocking chair dreaming about days gone by, show them THIS.

It’s all the teenage thrill of sneaking out after curfew for a party — scaled up a couple of generations. Instead of sneaking past mom and dad, they had to slip out of their retirement home.

The objective: Wacken Open Air, where Germany hosts the largest heavy metal festival… In The World.

Not only did they TRY to slip out… they got to their destination, and partied until 3 in the morning!

Sadly, names and photos have been withheld, but the whole episode brings up memories of this viral clip.

According to Itzehoe police, the pair was eventually found Friday at 3 a.m. local time at the festival after their retirement home in Dithmarscher reported them missing. Police told the Deutsche Welle the men were found “disorientated and dazed.”

The metalheads were apparently reluctant to leave the four-day festival in Wacken. They had to be escorted home with a taxi and a patrol car as a “precaution,” police said.

Festival organizers didn’t specifically address the senior daredevils, but their official Twitter account made sure give a shoutout to elderly fans “because you’re never too old too rock.”
Source: CBSNews 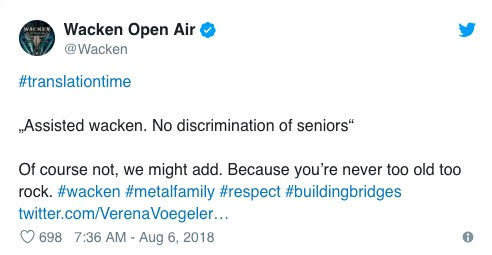 Getting old doesn’t mean it’s time to roll over and play dead. In fact, that’s a great time to take stock of your life and see what new adventures await you.

That’s what our Warriors & Wildmen team dove into in last week’s episode, How To Move From Suckiness To Significance

Life’s too short to squander any of it by rolling over and playing dead.