“If you’re not going to listen to me, I’m done talking,” then set down the microphone and walked out of the room. That was Nancy Pelosi addressing her raucous caucus.

Pelosi barely eked out a leadership win for control of the House. Now her rowdy bunch of miscreants and malcontents are rocking the boat, and it’s only a matter of time before the so-called ‘Master Legislator’ has a full-scale civil war on her hands from radicals with nothing to lose.

Remember, AOC and company from a generation of impatient political bomb-throwing activists who would gladly take a short career that makes a big slash over a long one that doesn’t.

Civil war is brewing because are trying to run the Clinton playbook of attacking the accuser rather than stepping up and calling out the very real evidence of Anti-Semitism in their midst.

Team Pelosi (if it can truly still be called that) can say ‘but you guys’ or ‘but white supremacy’ or ‘but Islamophobia’ all they want, but it remains that an elected Muslim woman in the Democrat party, now 37 years old is no ‘naive kid’ needing a pat on the head and an encouragement to mature into her role. She said what she said, and she knew what she meant.

For the Democrats to call out this ‘new face of the party’ NOW, after so proudly slapping her face on the cover of Rolling Stone with other leading Democrats leaves the party with egg all over theirs.

The panel’s Jewish chairman, Rep. Eliot Engel (D-N.Y.), had previously derided Omar’s “vile, anti-Semitic slur,” though he said Wednesday morning he would not support ousting her from the committee.

Republicans have tried to paint a contrast between how Democrats and Republicans have responded to controversies involving one of their own, with GOP leaders repeatedly highlighting how they kicked Rep. Steve King (R-Iowa) off his committee assignments after he made racist remarks in January.

Privately, some Jewish lawmakers are still fuming about Omar’s latest comments, which come after she has already apologized for other remarks criticizing the political influence of pro-Israel activists.

In the closed-door meeting Wednesday, Pelosi tried to shift the blame for the firestorm over Omar in part to the press, and repeatedly stressed party unity in the public eye.

…Multiple other Democrats urged their colleagues to stay off Twitter — where some lawmakers, including Reps. Alexandria Ocasio-Cortez and Juan Vargas — sparred over the weekend.

Vargas wrote that “questioning support for the U.S.-Israel relationship is unacceptable,” to which Ocasio-Cortez responded: “I remember a time when it was ‘unacceptable’ to question the Iraq War.”
Source: NYPost

With Keith Ellison’s past connections to Louis Farrakhan (who compared Jews to ‘termites’), Ilhan Omar’s several documented anti-Semitic statements JUST since taking office, Rashida Tlaib blotting Israel off the map in her Congressional office, besides AOC taking sides by retweeting posts by a PLO supporter just this week, the Democrats have a very serious and specific racism problem. Anti-Semitism.

As the brilliant Cartoonist Branco put it: 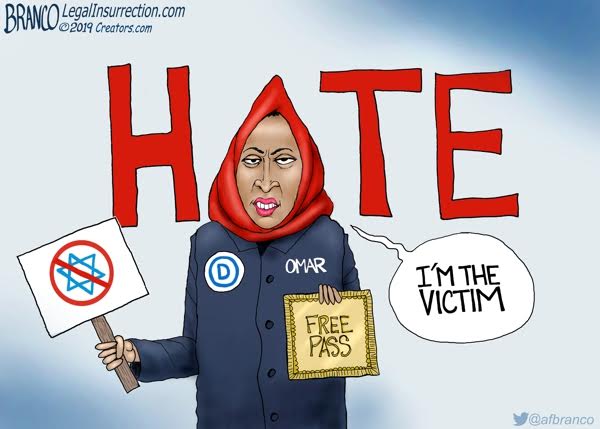 But if some of the party actually embrace anti-Semitism, or want to conceal that there is a growing trend in that direction, which for various historical and cultural reasons happens to be especially obvious among their Muslim members, what do they do?

Their options are (1) Alienate their shiny new voting block among Islam or (2) push back and demand a blanket objection to racism, with an emphasis on ‘generic’ racism that nobody, in particular, has been accused of.

Pelosi realizes the ‘optics’ of watering this down will be devastating and seriously undercut their favorite tactic of calling everyone racist. But she’s not in control anymore.

So much for AOC’s demands that the rank-and-file sit down, shut up and just follow orders because they’re all on the same team. Didn’t she threaten to put people’s name on a ‘list’ over exactly that? Or did she only mean people who deigned to disagree with Empress Alexandria?

Now that Democrats have the power they so desperately craved, will they have any consensus about what to do with it?