This could radically alter U.S. politics in just a few years.

A newly released Harris Poll is going to send a chill up the spine of freedom-loving Patriots — especially those that were around for the Cold War. As our population ages and the young pups who have drunk deeply from the well of public  education are entering the political sphere and casting their ballots, there is a massive change in the way that socialism is viewed by the younger generation. It seems as though the leftists that have overtaken academia have succeeded in making socialism palatable — more than half said that they would rather live in a socialist country than a capitalist one.

Axios published the Harris poll and it reveals that Millennials and Gen Z are much more comfortable with socialism than the generations before them. The big problem is that this socialist-friendly group is projected to be 37 percent of the voting population in 2020. 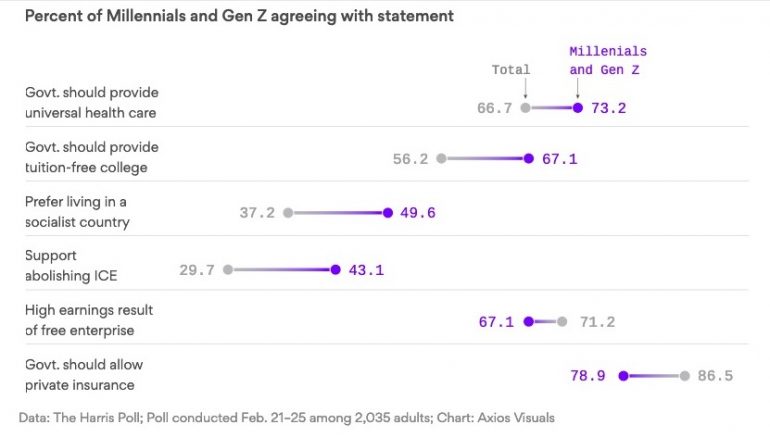 What kind of America would we become if 37 percent of the electorate agrees with AOC and then actually drags their backsides to the polls to vote for socialist policies?

Welp, the best we can hope for is that they’ll be too busy liking their each others Instagram posts and waging online wars to silence conservatives who say something like ‘men are not biologically women’ on Twitter that they won’t actually get to the polls. I mean, after all, getting out to vote is a whole lot of work — forms, paperwork, and the mail? Come on, like you can expect these pampered young ones to figure all that out! Maybe that’s why there’s a push to make voting day a holiday.

This is why we need to keep pushing back on AOC’s nonsense — the future of American freedom is at stake.