‘There’s a lot of news right now about conflicts within the Democratic Party, and similar stories will likely continue to pop up for the next two years,’ according to Perry Bacon, Jr. of FiveThirtyEight on March 11, 2019.

Mr. Bacon’s observation is a bit understated, but it’s hard for the media to criticize their comrades. The truth is that the Democrats are in disarray. This is evident across the board and indicates that there may be trouble for those who hope to see the end of President Trump.

It’s become so blatant that Chuck Todd, normally a reliable mouthpiece for the liberal media, whined on this Sunday’s Meet the Press about ‘real fissures in the Democratic Party.’ Not to be outdone, in a column posted on March 12, 2019, liberal Dana Milbank cried about an ‘ugly internal squabble‘ that threatens Democrat unity and may help the president.

What’s got the Democrats and their enablers up in arms? It’s a series of issues and events that reveal the lack of integrity and values on the part of the Democrat party.

First on the list is the issue of impeachment. For nearly two years, Democrats have awakened each day, dreaming that it’s the one that President Trump will be forced out of office. They’ve been promised evidence of collusion and high crimes. They’ve been told it’s only a matter of time. Now, though, it seems that the evidence isn’t going their way. Trump is still in office. The long-awaited Mueller report may not deliver like they’d dreamed and their attempts at swaying public opinion have backfired. Now Speaker Nancy Pelosi (D-CA) is taking impeachment off the table!

Can you hear the cries of grief? Pelosi, in an interview with The Washington Post announced she’s opposed to impeachment in the absence of evidence that is ‘compelling and overwhelming and bipartisan’ and because it would divide the country. In words that seem to reverberate threateningly, Rep, Alexandria Ocasio-Cortez (D-NY) said, ‘I happen to disagree with that take. But you know, she’s the speaker. … I think we’ll see.’

Looks like trouble in Nancy’s kingdom. A ‘no impeachment’ policy must be unsettling to Rep, Jerrold Nadler (D-NY) who’s worked tirelessly and dishonorably to launch baseless investigations that he hopes lead to impeachment. Impeachment being taken off the table can’t be good news to Rep. Adam Schiff (D-CA) who’s been babbling for two years about evidence that doesn’t exist.

There’s a gulf in ‘Donkeyland’ as wide as the Grand Canyon. The media likes to pretend it doesn’t exist, but it’s there.

There’s more, though. The Democrats can’t seem to figure out what they think about anti-Semitism. It shouldn’t be that tough, but apparently, it baffles the progressives. Rep. Ilhan Omar of Minnesota has repeatedly made anti-Semitic comments and tweets. House Speaker Nancy Pelosi of California attempted to push for a vote on a resolution condemning anti-Semitism. This angered the Progressives and the Congressional Black Caucus. A CNN blog of March 7, 2019, noted that they ‘were furious about the leadership’s gambit.’

As a result, the House passed a weakened condemnation of ‘all hateful expressions of intolerance’ without mentioning the hate being promulgated on the Democrat side. Some Democrats were outraged at Rep. Omar’s remarks, but they’ve faced some pushback.

The Washington Times Becket Adams reported on March 12, 2019, ‘Rep. Rashida Tlaib, D-Mich., is not only upset that members of her Democratic cohort have criticized Omar’s frequent anti-Semitic outbursts, but she also went so far as to say in an interview that aired this weekend that her party has an Islamophobia problem.’

‘Donkeyland’ seems to be unsure of what to do about hate speech and are accusing each other of being bigoted.

Another area of disagreement among the Democrats concerns what to do with Sen. Bernie Sanders (I-VT). Good ol’ Bernie is a Socialist, but he’s gained quite a following among the left. This angers some Democrat apologists, like Joy Reid of MSNBC, who criticized Sanders on Meet the Press for ‘not being a Democrat’ and bitterly tweeted about Sanders’ supporters, ‘This demand: that people outside a party get to choose that party’s nominees, is always amazing to me.’

Okay, it seems that the Democrat primary will be somewhat focused on just who it is that can actually run under the Democrat banner. Will Sen. Sanders be ‘Democrat’ enough to run for their nomination? Just how will the rest of the crowded field respond to the old Socialist? We’ll have to wait and see. President Abraham Lincoln once referenced Jesus’ words when he noted a ‘house divided against itself cannot stand.’ While I understand the context of both Jesus and President Lincoln, I can’t help but hope that the Democrats haven’t learned that lesson.

George Washington’s Warning About Alienating ‘Any Portion Of Our Country From The Rest’
March 1st, 2021 DC Dirty Laundry 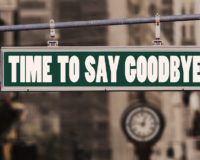 We Are Witnessing A Last Minute Mass Exodus Before The Final Collapse Of Our Major Cities
March 1st, 2021 DC Clothesline