The left has just learned that Joe Biden can sometimes behave in a pretty creepy way. We say, ‘Duh!’

Conservatives have been noticing Joe Biden’s touchy-feely way with women and girls for years.

Now that a couple of Democrat women have come in this #MeToo era and complained about the former Vice President’s behavior, we’re now supposed to take it seriously.

Lucy Flores’s essay titled, ‘An Awkward Kiss Changed How I Saw Joe Biden’ was published just a few days ago. She writes of how she was running for lieutenant governor in Nevada in 2014, and Biden attended a campaign rally to boost voter turnout. While waiting to go onstage, she says that Biden was standing behind her, then put his hands on her shoulders, smelled her hair and planted a ‘big, slow kiss’ on the back of her head.

This seems to be Biden’s standard modus operandi.

A second woman, Amy Lappo, claims that Biden ‘touched her inappropriately’ in 2009. Her claim was that though it was not sexual, he grabbed her head and rubbed noses with her. She thought that he was going to kiss her on the lips, but he didn’t. She didn’t complain at the time, even though she felt very uncomfortable.

So, why are these #MeToo allegations coming forward now?

Simple. Biden is leading the pack, and he’s a (relatively) moderate Democrat who isn’t taking a deep-dive into Marianas Trench of Socialism. He’d rather just kind of wade in at the shore line. He’s also an old, white man who has already tried to run for president three times and never won the Democratic nomination.

Also, Flores had been a Bernie-backer in 2016 and was at a Beto rally over the weekend.

The former assemblywoman was asked whether politics motivated her to come forward. Flores, who supported Sen. Bernie Sanders in the 2016 presidential race and was at a rally for Beto O’Rourke on Saturday, said politics was her main driving reason.

“I would say politics was definitely the impetus. The reason we’re having these conversations about Vice President Joe Biden is because he’s considering running for president,” she said.

Flores said that to her the kiss disqualified Biden as candidate. She said there were other credible instances of Biden acting inappropriately toward women.

“Never do I claim that it rises to the level of a sexual assault or anything of that nature. What I am saying is that it’s completely inappropriate, that it does not belong in any kind of a professional setting, much less in politics,” Flores said.

By the way, if past actions count, then Bernie has a whole lotta ‘splainin’ to do over his 1972 essay where he writes about a woman ‘fantasizing about being raped by three men simultaneously.’

Personally, I think that this ‘new’ discovery of Biden’s problematic behavior is political. It seems to be an obvious attempt to take out the front-runner in the crowded Democrat race. If it were really about the way women felt, why not say something when this has been well-documented for years? He was mocked by Jon Stewart, for crying out loud! Weirdly, after that shellacking, Biden still didn’t stop his creepy behavior.

We all know some people that just don’t comprehend the concept of personal space, or who are ‘over-friendly’ without realizing it. I actually think that Biden falls into the camp of ‘playfully flirtatious’ rather than ‘sex-crazed pervert.’ If he thought his behavior was truly bad, I don’t think he’d engage in it so publicly.

That said, Biden has also been criticized by female Secret Service agents for his penchant for skinny dipping.

Don’t get me wrong, criticizing the timing and possible motives of the accusers isn’t to say that Biden’s behavior is excusable. Far from it.

Hopefully, Biden will get a little self-awareness and realize that what he saw as simple friendliness is what other people see as creepy and harassing.

But until then, let’s just revel in the memes… 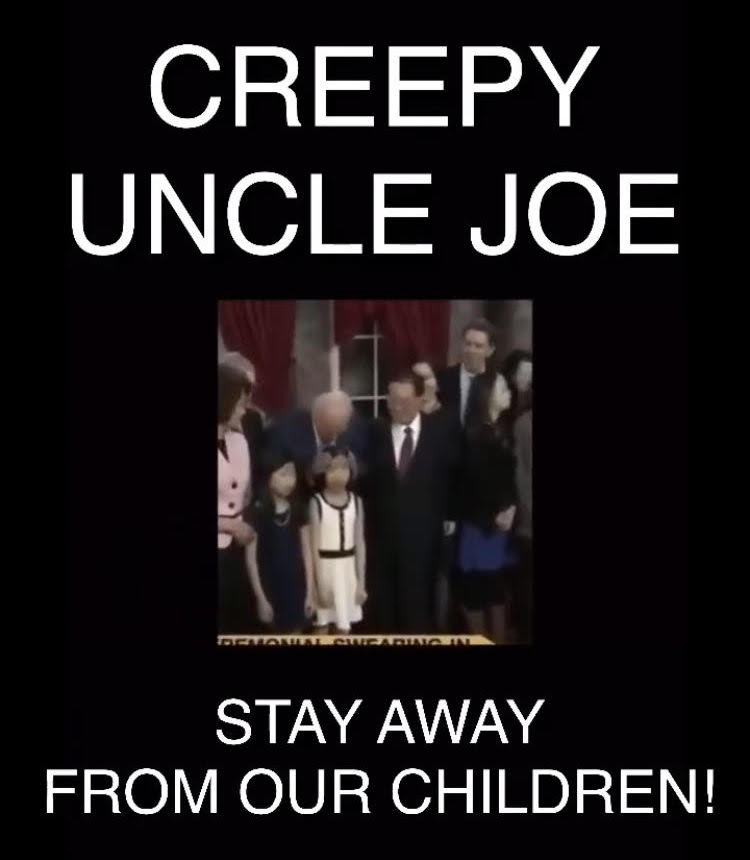 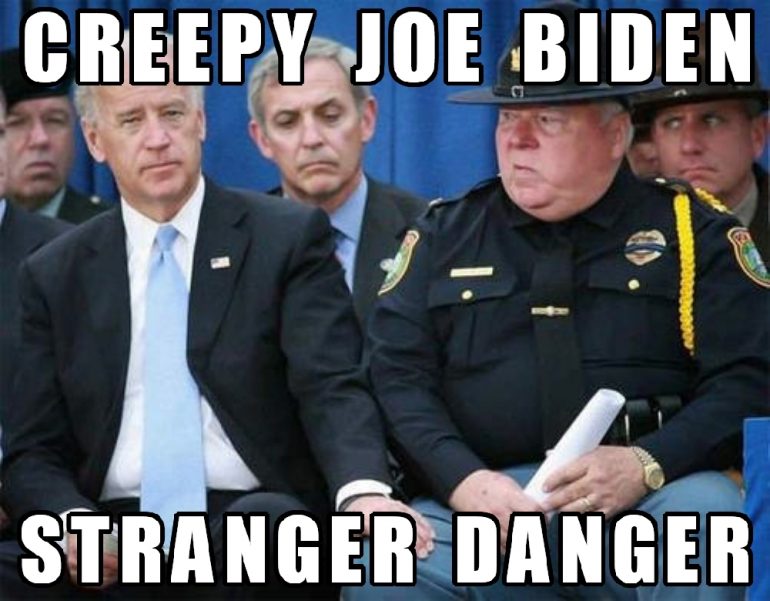 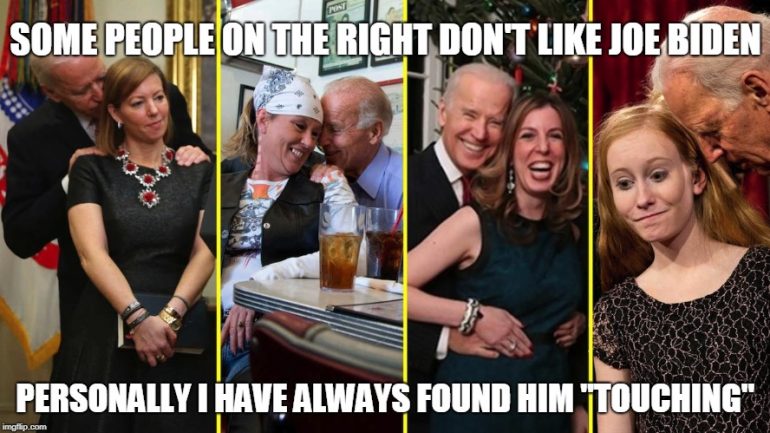 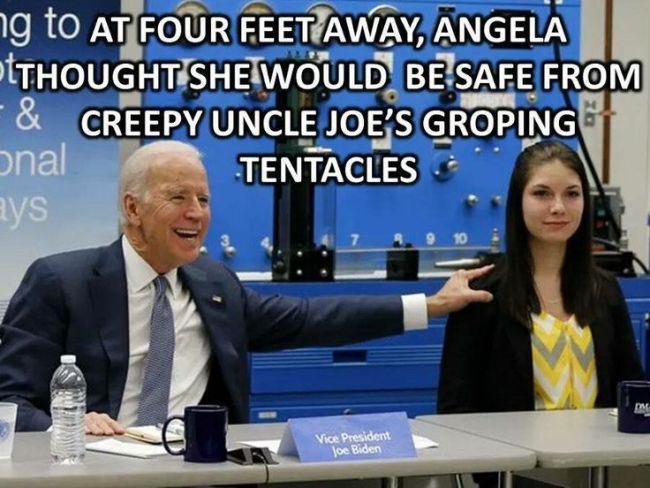 This iconic photo was made into a meme: 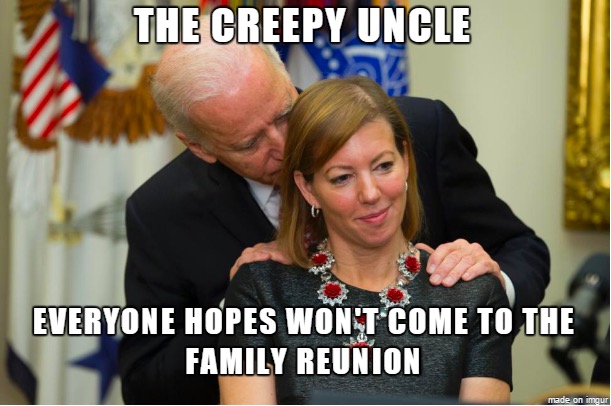 The woman in the photo, Stephanie Carter, said that the moment wasn’t as creepy as it looked and she appreciated Biden’s ‘support.’

Nevertheless, ‘Creepy Uncle Joe’s’ photo was cropped and shopped into other photos to make some truly hilarious (and also disturbing) memes: 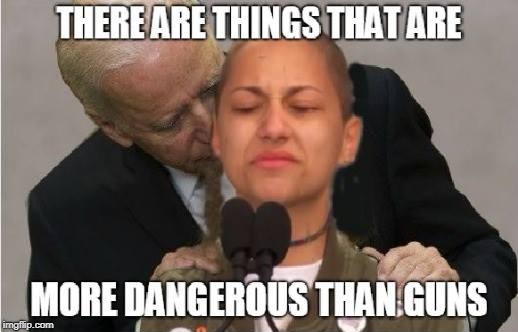 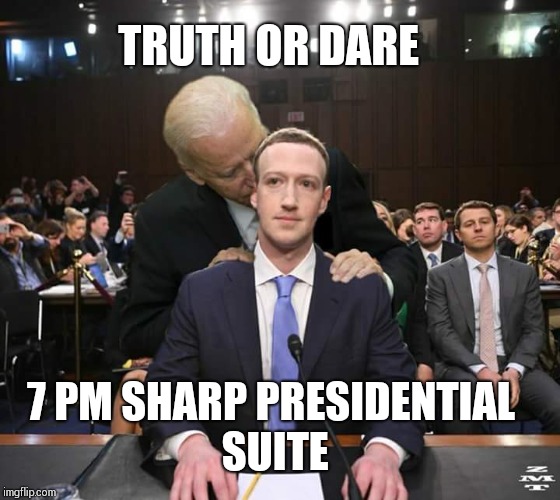 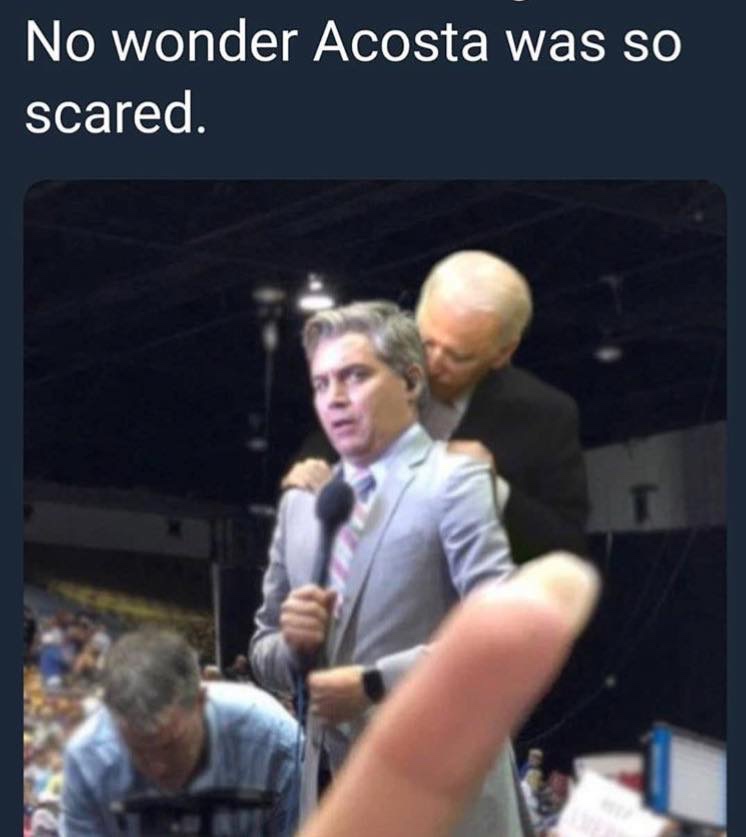 There are other memes that are just *chef’s kiss*: 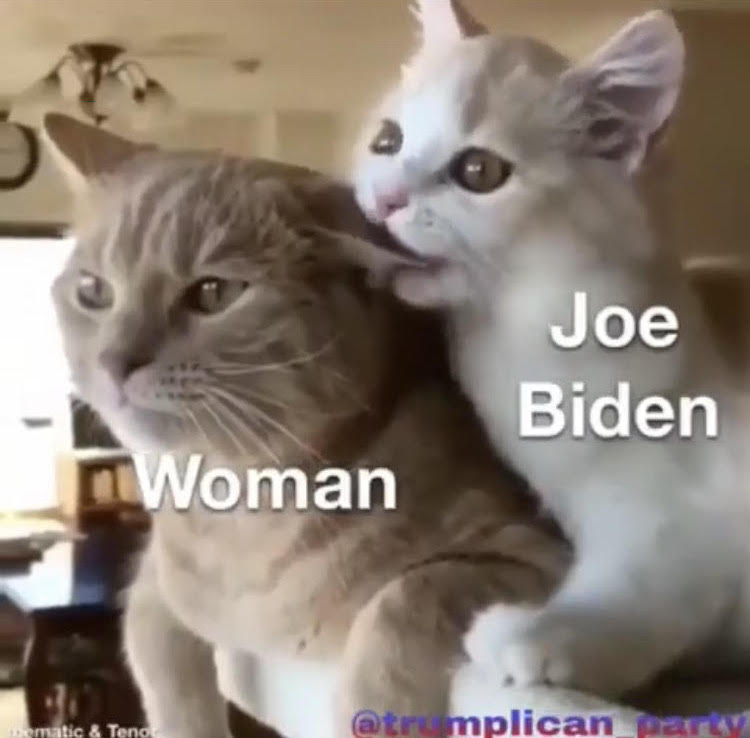 This is nothing new.

Back in 2015, Joe Biden was mocked for his tendencies to grope by none other than Jon Stewart and Samantha Bee on The Daily Show. 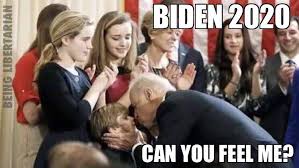