With much fanfare, a new Vegan cafe appeared in the scene in 2017, bringing attention to a favorite Feminist Shibboleth. The Wage Gap. (Which even center-left sites like Forbes have acknowledged as debunked.)

Undaunted by facts, they flew their Feminist Flag high. How high? It was reflected in their pricing model. 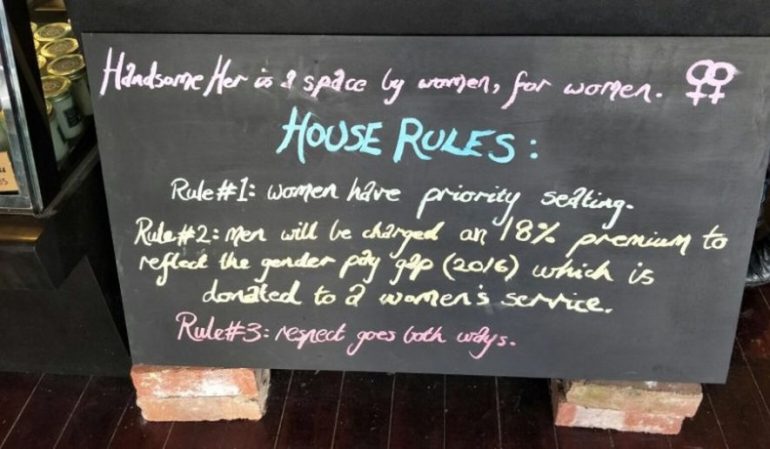 Men pay more. Why? Because they’re men. (How they hoped to get past the ‘assuming my gender’ issue is anybody’s guess.)

Despite significant backlash on social media, the cafe’s owners appear determined to continue their gender-based surcharge, CNN reported, noting that the cafe reports men have patronized the cafe and donated money above and beyond the surcharge.

“We’ve had men travel across town to visit us and pay ‘the man tax’ and throw some extra in the donation jar,” owner Alex O’Brien wrote on Facebook, CNN said.
Source: WashingtonTimes

Sure, people wanted to show the world how ‘woke’ they are on opening week. The real test is: how about when the novelty wears off?

They failed that test.

After two years of trading, the café announced it would be closing its doors for good on April 28.

Co-owner Alexandra O’Brien has not detailed the reason behind the move, but Handsome Her has endured a widespread backlash for its perceived reverse sexism.

In a post entitled ‘A Handsome Farewell’, Ms O’Brien wrote: “It’s been a wild journey to say the least. When we opened Handsome Her in 2017, we expected that perhaps we might make a stir through our brazen public discussions of structural inequality and oppression.

“The man tax blew up the internet, an idea that we didn’t think was all too radical, yet the way the world responded showed us how fragile masculinity is and solidified the necessity for us to confront and dismantle patriarchy.

“We were just one little tiny shop on Sydney Rd that was trying to carve out a swathe of space to prioritise women and women’s issues, and suddenly we became the punching bag of Melbourne and the internet.
Source: Standard

Their business failed? And they are blaming … men and the ‘patriarchy’?

Typical of a socialist to (a) pick a niche market (Vegan), (b) further self-select policies that alienate half of the population that MIGHT be interested in your product and then (c) blame customers for not supporting their venture.

As someone trying to start a business, somebody should have told you, there’s this thing called ‘market forces’.

As for the ‘woke’ business model you tried to run — how shall we put this?

Yep. That about sums it up.

You can be successful, or you can scold and drive away your own potential clients.

Is the Transition to Harris Underway? Why No SOTU Address? Do We Not Have a President?
March 7th, 2021 Conservative Firing Line