Pick a fight and then pretend she’s a victim. She fits right in with the Liberals, doesn’t she?

Now that Omar is taking heat for her statements, she’s gone on offense.

You know the statements we mean, right? About 9/11?

If you’re not up to speed on the context, we covered it here.

First Member of Congress to ever describe terrorists who killed thousands of Americans on 9/11 as “some people who did something”.

An Imam is calling Omar out as an anti-semite. Here’s a more recent comment in the same vein: 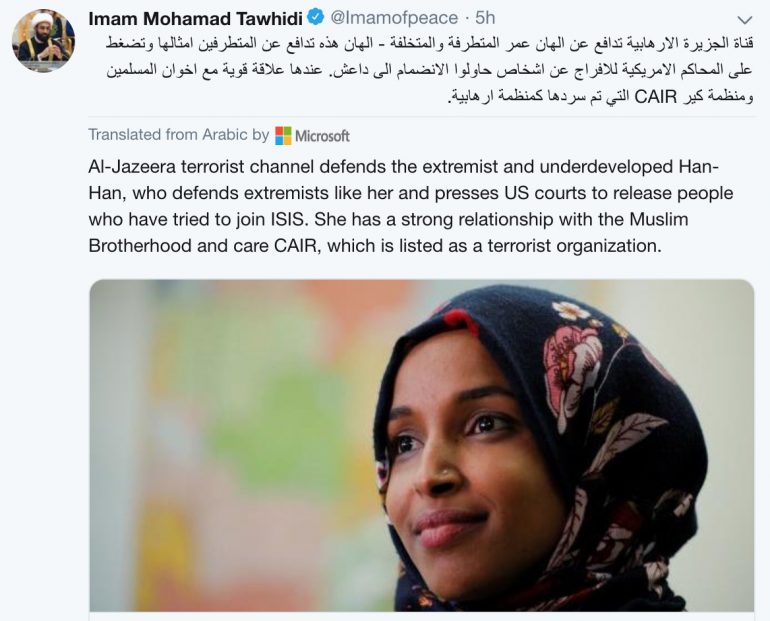 What most people miss in their reporting is that Omar lied about CAIR to ennoble it as the protector of Muslims unfairly oppressed in the backlash against 9/11. (CAIR was established in 1994.) She also failed to mention that CAIR was an ‘unindicted co-conspirator‘ in providing support to the terror group Hamas, according to the FBI.

The Left’s Agenda on Islam:

1- Silence all Muslims who support democracy, reform and dialogue.

2- Promote extremists as the only Muslims worth listening to.

4- Teach them how to abuse the law, then defend them.

But then, this is Ilhan Omar that we’re speaking of — did you expect better from a woman who may have committed immigration and student loan fraud by marrying her brother?

Despite all of her platitudes that she’s “learned” from her mistakes, she keeps making the same one.

Now Rep. Omar is upset that President Trump, a New Yorker, took umbrage with her dismissal of the 9/11 attack as “some people did something.”

WE WILL NEVER FORGET! pic.twitter.com/VxrGFRFeJM

Rep. Omar is now claiming that this tweet with this video of the 9/11 attack is causing “right-wing extremists” to threaten her life.

She issued a statement:

Since the President’s tweet Friday evening, I have experienced an increase in direct threats on my life — many directly referencing or replying to the President’s video. I thank the Capitol Police, the FBI, the House Sergeant at Arms, and the Speaker of the House for their attention to these threats.

Violent crimes and other acts of hate by right-wing extremists and white nationalists are on the rise in this country and around the world. We can no longer ignore that they are being encouraged by the occupant of the highest office in the land. Counties that hosted a 2016 Trump rally saw a 226 percent increase in hate crimes in the months following a rally. And assaults increase when cities host Trump rallies. This is particularly concerning given the president’s visit to my home state of Minnesota on Monday.

Violent rhetoric and all forms of hate speech have no place in our society, much less from our country’s Commander in Chief.

We are all Americans. This is endangering lives. It has to stop.

We are all Americans. This is endangering lives. It has to stop. pic.twitter.com/gwB2kDUIRp

Pretty rich that Rep. Omar is suddenly condemning “hate speech” and “violent rhetoric” when President Trump did neither.

I wonder what Rep. Omar had to say about the Bernie Bro. who shot at the GOP baseball team. I’m sure she condemned that completely and insisted that our “do or die” rhetoric on healthcare change, right?

Interestingly, she doesn’t hold the same standard for ISIS recruits. In 2016, she called for leniency and compassion in the sentencing of nine men accused of attempting to join ISIS.

In 2017, when she was in the Minnesota House of Representatives, she was one of two members of Congress to vote “no” on a bill that would block life insurance payouts to families of terrorists.

Just a few days ago, she was making a public appeal for the President to intervene on behalf of a senior member of the Egyptian Muslim Brotherhood who Rep. Omar calls a “political prisoner” in Egypt.

Rep. Omar’s claim that President Trump’s rallies coincided with a rise in hate crimes was debunked by left-leaning Vox, which stated, “the researchers do not suggest that Trump directly caused any of these crimes.”

In addition, the original Washington Post article wrote that it was an increase in “reported hate crimes” not that there were actual charges associated with those alleged “hate crimes.” Also, was Jussie Smollett’s Subway excursion included in that tally? Who knows.

It’s never ok to suggest, (let alone use,) violence as an answer to political opponents.

You know what else isn’t ok? Playing the victim.

Since 2016, there have been many on the right that have been actual victims of violence at the hands of leftists and the same ones wringing their hands because they’re getting threatened have said nada to condemn it.

Sorry if I don’t feel too much sympathy.