She says that she “likes the attention” that she gets. How sad is that?

Last week, a heated debate around free speech began on Social Media(D) and spread to the national stage, including onto the pages of “The Old Gray Lady”.

The school board wanted to preview the piece before it was published but the 17-year old student journalist, (who is also the managing editor,) and the faculty advisor to the newspaper declared that would be a violation of their free speech.

The district said the piece might violate a state rule that it said prevented publications at public schools from featuring “obscenity, defamation and incitement,” and it threatened to fire Katherine Duffel, the paper’s longtime faculty adviser.

In articles, columns, television programs and social media posts, the standoff over an unpublished story became either a symbol of censorship and women’s rights, or the loss of traditional values and a school district’s responsibility to protect young students from harmful content…

In the end, The Bruin Voice, the student newspaper for Bear Creek High School published the piece, “Risky business: starting a career in the adult entertainment industry” profiling Caitlin Fink. 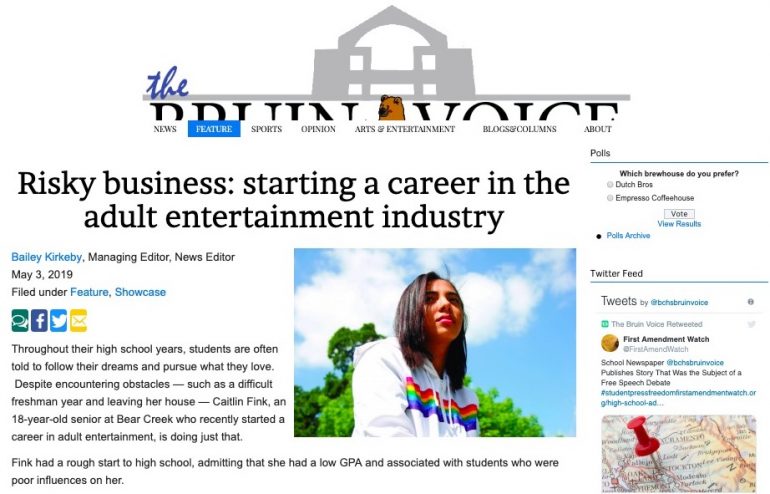 [Editor’s Note: I’m not going to be too harsh here, because this is a piece written by a 17-year old student, Bailey Kirkeby, about an 18-year old working in the “adult entertainment industry.” Fink left home in high school and turned to selling nude photos of herself online to make money. I cannot imagine the kind of desperation that it would take to resort to that. These are young kids with very little life experience, and I remember what I was like back then. I’m sure that Kirkeby is trying to do her best to tell Fink’s story in an open and honest way.]

Here is how the article began:

Throughout their high school years, students are often told to follow their dreams and pursue what they love. Despite encountering obstacles — such as a difficult freshman year and leaving her house — Caitlin Fink, an 18-year-old senior at Bear Creek who recently started a career in adult entertainment, is doing just that…

…“I didn’t start high school the way I wanted to,” Fink said. “I didn’t take the right classes I needed to take to get in the university I wanted to, I hung around the wrong people, [my GPA was around] 2.6 or 2.8 and I wasn’t really trying that much.”

Unfortunately, Fink’s struggles did not end in her freshman year. On New Year’s Eve 2018, Fink left her house and is now living with her friend’s family and paying them approximately $300 a month for her food, utilities and rent.

I don’t know what her home life was like, but I’d guess that Fink didn’t have a very positive relationship with her dad.

It’s unclear what Kirkeby’s intentions were with this article. She said, “[i]t was the same as the profiles we do for every issue, like a star athlete; just a student sharing her story.”

But it’s evidently not the same as a profile on a “star athlete” or the kid that won the math trophy. This is a story about a young woman using her body to make money, and how lucrative that has been for her. This is a high school newspaper going to students as young as 13 or 14 — what we call “minors.”

“When I first started selling, it was just for money,” Fink said. “But then I liked the attention I got, [such as] being called beautiful. I enjoyed it because it made me feel good about myself.”

Fink says she generated a substantial amount of money doing this, once making $475 in three hours.

Could this not encourage a young girl with poor self-esteem to follow the same path as Fink?

She says it’s not all glitz and glamour, but she made almost $500 in three hours. Tell me again that that that has no appeal to our consumerist culture.

Fink says the industry has policies in place — such as mandatory two-week sexually-transmitted disease (STD) tests typically paid for by agencies — to prevent workers with STDs from performing in scenes while infected.

The piece is honest about that, too. Fink says that she has scars from the needles because the phlebotomist had to poke her so many times to draw her blood.

Fink was scheduled to shoot her first professional pornography scene in March, but the scene was canceled at the last minute when the company that booked her saw her body acne.

“[The company] has 4K camera quality that is crisp and clear, so they wanted me to get my body acne cleared before they shot a scene with me,” Fink said. “[My agent] told me the scenes I was going to be doing, too. I was so excited.”

On April 10, Fink had her first audition at a strip club in San Francisco, another path in the adult entertainment career that she hopes to pursue.

“When I auditioned at a strip club, I made $80 in what felt like five or six minutes,” Fink said.

This focus on the profit aspect doesn’t touch on the cost of that quick buck — self-respect.

It does say that being in the “adult entertainment industry” does lead to #MeToo situations that working as a dish washer doesn’t.

“People assume that just because you’re in the industry, you would do sexual things with anyone, and that isn’t true,” Fink said. “Adult entertainment is a job just like any other job. There’s always that risk of getting kidnapped or possibly not even knowing what to do after your career is over and trying to find work after that.”…

…“I’m a lovey-dovey, old school romantic, and people just assume things about me,” Fink said. “They don’t really know me or take the time to know me. I’m extremely nice. I won’t even say anything if people cut in front of me in line.”
Source: Bruin Voice

Fink said in the video below that she liked being called beautiful because she doesn’t always believe that about herself.

How incredibly sad is that?

All of this “be comfortable in your own body” messaging by companies like Dove and girls still think that they must conform to one particular beauty standard.

In our age of Instagram “influencers” and airbrushed Kardashian perfection, young girls are feeling the need to be sexualized in order to be seen as beautiful.

In our culture, it’s clear that sex has lost any connection to marriage, let alone love or even commitment. It’s now just a physical act and that men and women are to view sex the same way– but Psychology Today disagrees.

Watch the news report with an interview with Cailtin Fink: