Bad news for the insider power-brokers from the Obama Administration. What was once done in secret will now be shouted from the rooftops.

And let the chips fall where they may.

President Donald J Trump has issued a Memo from the White House.

The Left is already in damage control mode over this, claiming there have been several inquiries already.

This is the first one that’s explicitly looking into the ORIGINS of the story… and looking into OTHER Agencies beyond the FBI. And the person who’s looking into it has the power to prosecute criminal actions if and when they turn up. 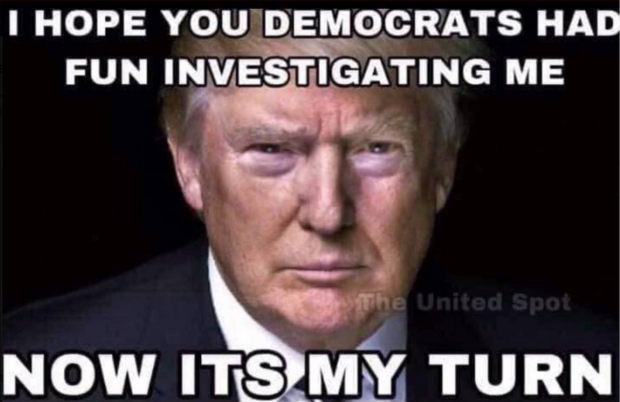 “Intelligence Agencies were used against an American President.” @DevinNunes @ShannonBream @FoxNews This should NEVER happen to a President again! Dems are furious at Robert Mueller for his findings – NO COLLUSION, NO OBSTRUCTION. Now they should go back to work and legislate!

From ‘All Agencies’. (Is that the sound of John Brennan nervously shuffling his feet we hear?)

First, we’ll give you the tweet thread where Trump announces it, then the official WH memo. 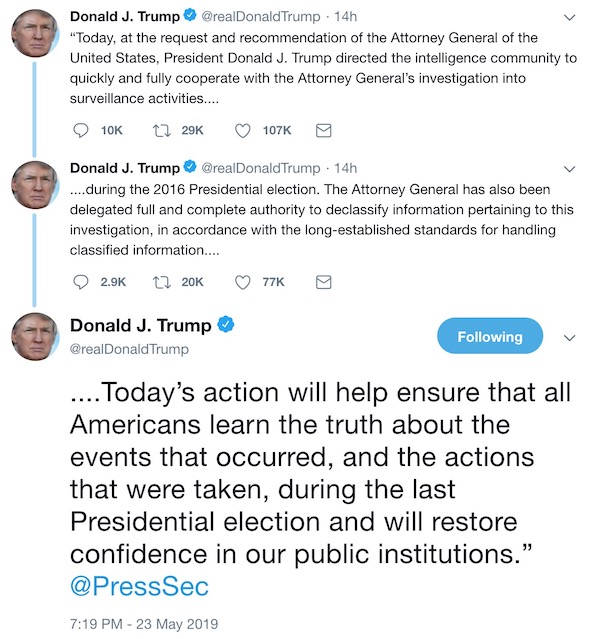 And here is Trump’s memo.

By the authority vested in me as President by the Constitution and the laws of the United States of America, I hereby direct the following:

Section 1. Agency Cooperation.
The Attorney General is currently conducting a review of intelligence activities relating to the campaigns in the 2016 Presidential election and certain related matters. The heads of elements of the intelligence community, as defined in 50 U.S.C. 3003(4), and the heads of each department or agency that includes an element of the intelligence community shall promptly provide such assistance and information as the Attorney General may request in connection with that review.

Sec. 2. Declassification and Downgrading. With respect to any matter classified under Executive Order 13526 of December 29, 2009 (Classified National Security Information), the Attorney General may, by applying the standard set forth in either section 3.1(a) or section 3.1(d) of Executive Order 13526, declassify, downgrade, or direct the declassification or downgrading of information or intelligence that relates to the Attorney General’s review referred to in section 1 of this memorandum. Before exercising this authority, the Attorney General should, to the extent he deems it practicable, consult with the head of the originating intelligence community element or department. This authority is not delegable and applies notwithstanding any other authorization or limitation set forth in Executive Order 13526.

Sec. 3. General Provisions.
(a) Nothing in this memorandum shall be construed to impair or otherwise affect:

(i) the authority granted by law to an executive department or agency, or the head thereof; or

(ii) the functions of the Director of the Office of Management and Budget relating to budgetary, administrative, or legislative proposals.

(b) This memorandum shall be implemented consistent with applicable law and subject to the availability of appropriations.

(c) The authority in this memorandum shall terminate upon a vacancy in the office of Attorney General, unless expressly extended by the President.

(d) This memorandum is not intended to, and does not, create any right or benefit, substantive or procedural, enforceable at law or in equity by any party against the United States, its departments, agencies, or entities, its officers, employees, or agents, or any other person.

(e) The Attorney General is authorized and directed to publish this memorandum in the Federal Register.