Unlike the events at a certain Florida HS, you can expect this story to vanish like the morning dew — since the narrative is more than a little inconvenient.

Before we come to that detail, here’s what happened in Denver:

Police confirm one fatality and eight students injured in an attack on STEM School Highlands Ranch in Denver.

Two people were apprehended after the incident, including Devon Erickson, 18, as well as a juvenile female. Both suspects attended that school as students.

The weapons were concealed in a guitar case and taken out once they were inside.

A video clip of the news, for context:

#stemshooting Adult suspect has been identified as Devon Erickson, age 18. We will not be releasing any photos at this time as it could jeopardize this critical on-going invest. We still have interviews to conduct and we want to make sure we have the most accurate information

Predictably, the usual gun-grabbers wasted no time in looking for ways to exploit the tragedy to push an agenda. 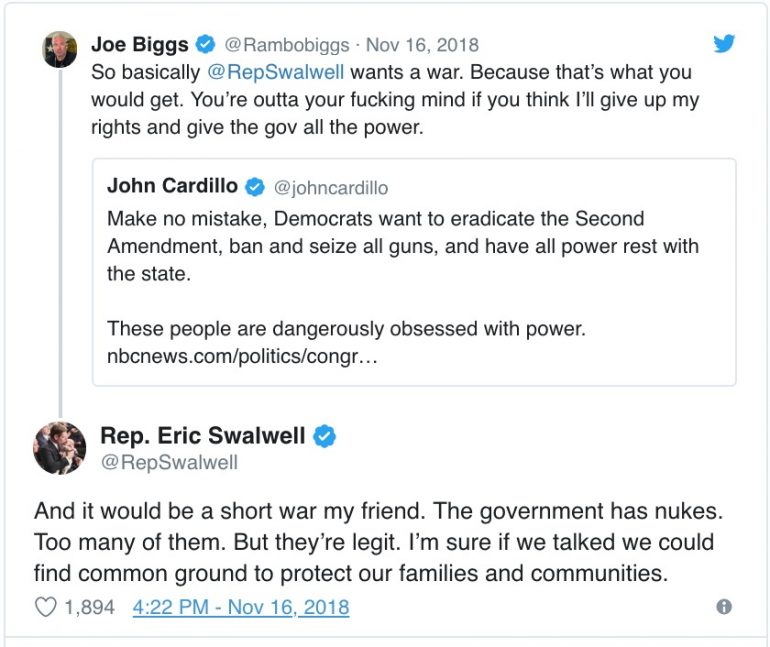 That aged well. Let’s ask the good citizens of Venezuela what good the promise of a renegade government drunk on its own power is, shall we?

Especially while we are seeing the House Democrats losing their collective minds in trying to oust Trump.

A quick sampling of the political piling on before we look at the ACTUAL story they were all ignoring. 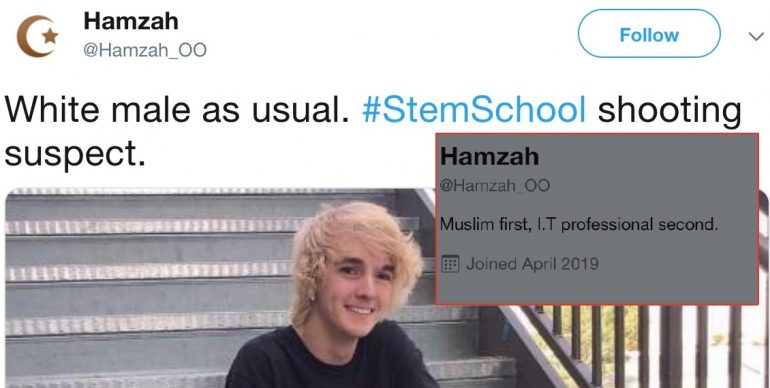 (Inset in the above photo is the Twitter bio.) ‘Hamzah’ doesn’t know the proverb about glass houses, obviously. The global body count doesn’t tilt in favor of his/her narrative. Not even close.

And of course, here’s the ‘coalition to stop gun violence’ blaming people other than the attackers, NRA and politicians, it’s a two-fer:

We know policies to reduce gun deaths. They are supported by overwhelming majority. NRA is politically impotent; sidelined.

If @senatemajldr continues to block GVP — there can only be one reason. He is content with status quo; the deaths & trauma of school children. #STEMschool

‘Never let a crisis go to waste’, amirite? This must be fundraising GOLD for you guys.

Meanwhile, in the real world, don’t expect the media to linger on this particular story any longer than they have to.

For one thing, the carnage can’t be attributed to a ‘scary black rifle’, so it isn’t much help to anyone pressuring to have them banned. While one rifle was recovered at the scene, there is no evidence that it used in the shooting. Handguns, not AR-15s were the weapon of choice for the attackers.

And his politics don’t help them any.

Mr. Erickson had said on social media, according to a report in Heavy.com, that he hated Christians for their teaching on homosexuality and his accounts suggested he was not a fan of President Trump.

“You know what I hate? All these Christians who hate gays, yet in the bible, it says in Deuteronomy 17:12-13, if someone doesn’t do what their priest tells them to do, they are supposed to die. It has plenty of crazy stuff like that. But all they get out of it is ‘ewwwwww gays,’ ” he wrote on Facebook a couple of years ago.

In 2016, his account shared a video of comedian and TV host Seth Meyers attacking President Trump, and in 2015, “he shared an Occupy Democrats post praising then President Barack Obama,” according to Heavy.
Source: WashingtonTimes

Sources told Denver7 late Tuesday that the juvenile suspect is in the process of transitioning from female to male.
Source: Denver7

Well, there’s a plot twist for ya!

Since the media likes to play the game of matching up attackers with people of similar ideologies (once they make sure it isn’t anyone on ‘their’ team), how do you suppose they would play that very same game if they owed no fealty to the Democrats?

They’d probably mention in passing how — apart from ‘small detail’ of the actual violence — they really are not all that different from:

Or perhaps they’d rather compare them to the Chick-fil-A-enraged pro-LGBT shooter who took Family Research Council’s name from the SPLC website and shot the guard there on a failed attempt at a murder spree.

The same media that talked about Marjory Stoneman Douglas HS for months after the fact moved on from the attempted assassination of Republicans playing baseball in only a few days.

What do you suppose the over/under is that the PartisanPress will still be talking about this shooting even three days from now? Or will they have moved on to whatever new shiny object Pelosi and Schumer are trying to whip us up into a frenzy over?

Oh, and for the record — there were heroes at that shooting. Unarmed students charged the armed ones and most likely saved some lives.

A high school senior who plans to become a Marine after graduation was among the students who tackled a gunman in a Colorado school on Tuesday.

Brendan Bialy attends the STEM School Highlands Ranch, which is not far from the site of the Columbine High School shooting 20 years ago.

Bialy’s father, Brad, confirmed to NBC News that the teenager and other classmates tackled and disarmed one of the two shooters.
Source: NBCRightNow

It is also worth noting that this school did NOT have a resource officer attached to it.

If the attacker were half the man of the guy who tackled him, he never would have gone on this rampage in the first place.