What is courage? What makes a hero?

A hero is the guy who knows what he is doing is dangerous but does it anyway in service of the greater good.

By that morning, everything that really mattered about Riley’s character and courage had long since already become part of him.

But in that critical moment of crisis, the world witnessed exactly what he was made of. 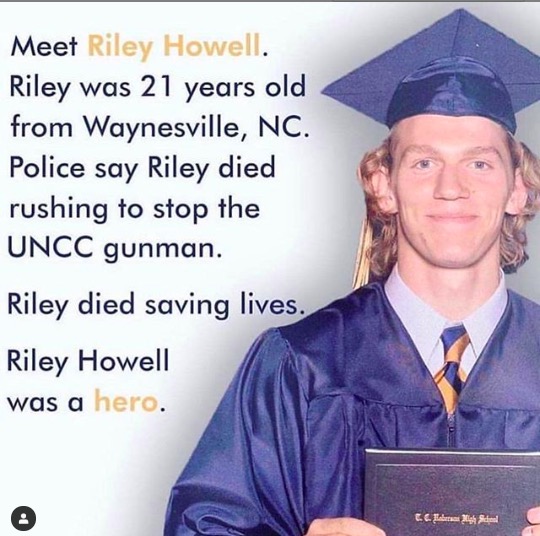 The mother of the North Carolina college student who was shot dead while confronting a gunman in his classroom said Thursday she was “beyond proud” of her son’s heroic actions during the rampage on the campus that left another student dead and 4 others injured.

Riley Howell, 21, died in his classroom at the University of North Carolina at Charlotte on Tuesday after charging and tackling the alleged gunman, identified as 22-year-old Trystan Andrew Terrell.

“While kids were running one way, our son turned and ran towards the shooter,” Natalie Henry-Howell, Riley’s mother, told NBC’s “Today” show on Thursday. “If he was in the room when something like that was happening, and he had turned away, he wouldn’t have been able to live with himself.”

Charlotte-Mecklenburg Police Chief Kerr Putney said during a news conference Wednesday that Howell’s decision to knock the assailant down allowed enough time for the first officer into the classroom to capture Terrell.

With the first two options not on the table, Riley stood his ground, and took down the school assassin… at the steep cost of his own life.

It was a short life that he lived, granted, but it was one that would allow untold others to go on to live long and full lives.

He was honored for that courage in some small way by the escort he was given for his funeral.

Traffic stopped on Charlotte streets as the solemn procession passed en route to his hometown in Waynesville, 150 miles west of Charlotte. Authorities say Howell, 21, tackled a gunman who opened fire in a classroom Tuesday – and in the process saved lives.
Source: USAToday

May his memory live on in the lives of those he saved.