Even Democrats want her to slink off into the shadows and stop bringing her own baggage into the national discussion… but she can’t.

And her claims on TV are bald-faced lies. Like what she said here:

Hillary Clinton: "Calling for" AG Barr's "resignation makes perfect sense, because he's not discharging the duties of the office; he's not going to resign, and at this point, I think that we know what we need to know about him." pic.twitter.com/iCrFdzi0L0

Silicon Valley may have recently rehabilitated the Clintons’ reputation by scrubbing references to ‘Clintonian’ as being a term meaning loose with the truth. But obviously, it’s time to restore those familiar definitions.

No, Barr wasn’t applying for a job… he was offering an opinion as a private individual with expertise on a subject. He had already served in that job and had nothing further to prove.

The woman who promised to keep Loretta Lynch in her job as AG if she won in 2016, while her husband met secretly on tarmac and while she herself was being investigated for felonies should be careful what accusations about ‘integrity’ get thrown around — especially when he has acknowledged concerns about how the politically corrupted members of the FBI brass who lead investigations into BOTH of the 2016 candidates may have been improper in their handling of those investigations.

One of the infamous Strzok/Page texts, even before the date Hillary was interviewed, said Hillary’s exoneration was already a done deal. And Comey’s wording in his memo scrubbed language from the first drafts that would have implied a felony on Hillary’s part and replaced it with much softer language.

Hillary is DESPERATE for Barr to be discredited as she should be. He’s a no-nonsense professional over whom the DC swamp has no leverage. That makes him exceedingly dangerous to the status quo.

There’s no telling where an honest investigation could lead him.

Including Uranium One. Or the numerous Hillary-camp connections to the Russian operatives that kept crossing paths with Trump’s team — including both the Translator and the Russian Lawyer in the Trump Tower meeting.

So, yes, Hillary — keep flapping your gums, and digging a hole.

That wasn’t all she said, either:

Speaking with host Rachel Maddow, Clinton brought up the infamous moment when Donald Trump, then running against Clinton for the White House, asked for foreign help to acquire Clinton’s private emails, saying at a July 2016 news conference: “Russia, if you’re listening, I hope you’re able to find the 30,000 emails that are missing.”

While Trump told Mueller that the comments were a joke, Russian military intelligence agents within about five hours had “targeted Clinton’s personal office for the first time” and “sent malicious links targeting 15 email accounts,” including one belonging to a Clinton aide whose name was redacted, according to Mueller’s report.

Clinton offered a hypothetical to Maddow: A Democratic candidate for the 2020 election comes on her show and says, “China, if you’re listening, why don’t you get Trump’s tax returns? I’m sure our media would richly reward you.”
Source: USAToday

Has she so soon forgotten that her emails went ‘missing’ (by the help of some bleachbit) AFTER they had been subpoenaed? That one little detail changes that narrative. And with Comey’s sketchy behavior in handling her case, it may yet be reviewed, and if political interference is determined, well, let’s just say that opens up other possibilities.

The cheering crowd may yet get their wish: 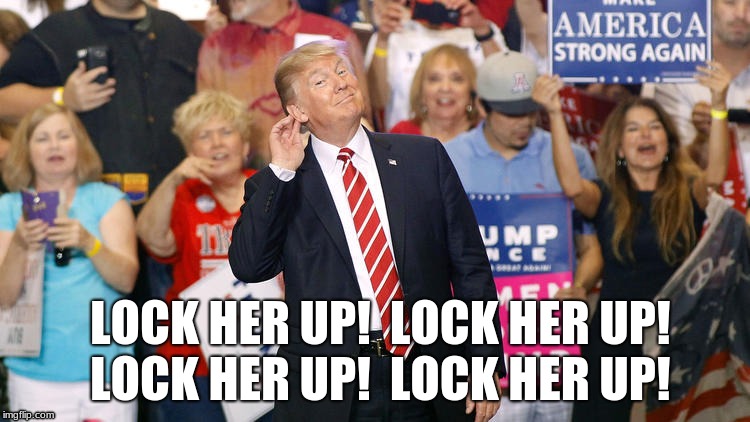 And wouldn’t THAT be a delicious boomerang-effect of an investigation that was triggered by her own Fusion-GPS originated endeavor of using Russian informants to dig up dirt on Trump?

Forget ‘Karma’, this is Proverbs 26:27 in action:
“He who digs a pit will fall into it, And he who rolls a stone, it will come back on him.”