Maduro claiming to have stopped ‘attempted coup’ amid crackdown where military vehicles ran down civilian protesters.

So much for that paradise that Bernie and company once praised so highly. Now the people are locked in a struggle against a despot who just won’t go away. A despot who arrests dissidents and whose government just killed yet another and injured twelve is clinging to power with the help of Russia and Cuba, not to mention the support of several other nations with sketchy diplomatic objectives… in case anyone was looking for a way to measure the moral clarity of the issue, here is a visual breakdown of which countries took which sides early on. 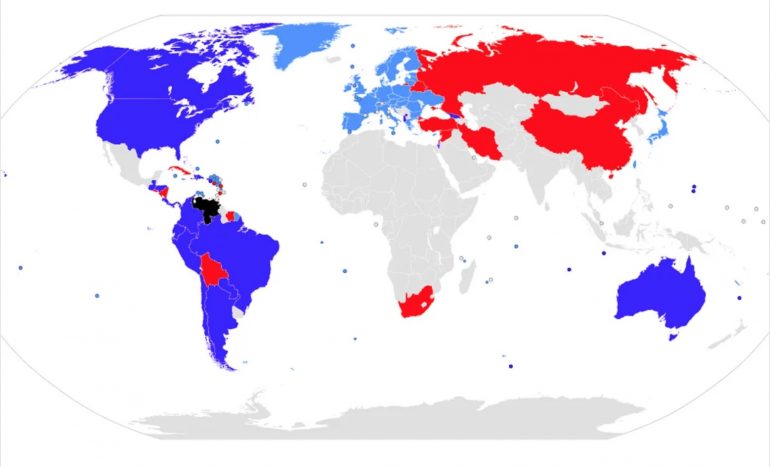 That was January, but it gives you a general idea of which way the trend line was going.

And, yes, that IS Iran in red, supporting Maduro.

Though a growing number of countries recognize the legitimacy of Venezuela’s interim President Juan Guaidó, the socialist dictator Nicolás Maduro has yet to relinquish power.

Maduro ignored the rule of law and violated the Venezuelan Constitution in fraudulent attempts to hold onto power. After a farcical “election” process in 2018, which had been stacked in Maduro’s favor, the legitimately elected National Assembly President Guaidó declared himself interim president, in keeping with provisions of the country’s constitution.

…The 2018 election itself was fraudulent. Opposition candidates were banned from running. Media were only allowed to report Maduro propaganda. The regime used food to bribe hungry Venezuelans for their votes. For these reasons, many democratic nations declared the election result illegitimate.
Source: Share America

And most Western countries — and many besides — have since acknowledged him as rightful interim leader until such time as they can get a free and fair election.

Here, the White House posted video of exactly what the Venezuelan citizens are up against.

This is the corrupt, illegitimate Maduro Regime. pic.twitter.com/79sFbYrzOp

And here is a news report (make sure you have the audio on for this one):

We’ll also throw in thirteen minutes of footage from Reuters, lest anyone raise questions about context…

Guaido was calling it the beginning of the final phase to oust Maduro, while Maduro claims to have put down an attempted coup.

Venezuela’s embattled President Nicolas Maduro has claimed his troops have defeated a “coup” attempt amid calls by opposition leader Juan Guaidó for protesters to return to the streets Wednesday.

In a live televised address Tuesday night, his first since the apparent uprising began, Maduro rejected claims he has lost control of the military and accused “imperialist” forces of seeking “to attack and overthrow a legitimate government to enslave Venezuela.”

“We have been facing various forms of coup d’etat, due to the obsessive efforts of the Venezuelan right, the Colombian oligarchy and the US empire,” Maduro explained, adding that the military air base Guaidó had spoken from earlier in the morning was never under the control of the opposition.

… Despite the government’s claims that the Tuesday uprising had been quashed, Guaidó, who is the head of Venezuela’s National Assembly, said that “Operation Freedom” would continue.

In the video speech, Guaidó said that Maduro no longer had the “support nor the respect of the armed forces.”
Source: Miami CBSLocal

The illegitimate Maduro regime relies on Cuba’s playbook of repression and torture to survive. We will hold Cuba & Maduro’s cronies responsible for any violence perpetrated today by ‘collectivos’ or security services against the innocent Venezuelan people. The world is watching.

The US will consider sanctions off ramps for Venezuelan officials & military members who take concrete, measurable steps to support democracy & freedom in Venezuela. Maduro’s cronies should accept Interim President Guaido’s offers of amnesty & work with us to secure their future.

The United States will continue to sever the ties between Cuba and Venezuela. Cuba’s survival has depended on the suffocation of Venezuelan democracy and freedom, but Cuba’s hold over Venezuela will end as the Venezuelan people stand for freedom.

….embargo, together with highest-level sanctions, will be placed on the island of Cuba. Hopefully, all Cuban soldiers will promptly and peacefully return to their island!

What Trump is doing here, he’s also encouraging others to do elsewhere around the world — rally to seize their own freedom.