The Socialists want a “public” banking option that’s “not for profit” because the government does SUCH a great job running things.

Are these people high?

It makes you wonder.

Yesterday, the Democratic Socialist Dynamic Duo — one a freshman Congresswoman and the other a septuagenarian Senator — teamed up to save Americans from… banking discrimination.

It seems AOC has heard that 34 million American households are “unbanked” and she thinks the best solution is government — of course! But she also wants to phrase it like the government-takeover of health care: Let’s provide a “public option,” which will eventually become the only option. Oh, and let’s make it sound nice and caring, like the Salvation Army — it’s a non-profit!

It is true that millions of Americans lack access to the basic services that traditional banks provide, from checking and savings accounts to credit and debit cards to online payment options. Banks know there’s a problem, and so they have been creating innovative ways to meet the need.

The Consumer Financial Protection Bureau (CFPB), the least constitutional part of Dodd-Frank, has tried to regulate the banks, stopping them from meeting the market needs of the unbanked.
Source: PJ Media

O’Neil went on to point out that Dodd-Frank financial reform has “wreaked havoc on the U.S. banking system.” It was intended to keep big banks from muscling smaller banks out of the market, but the opposite has happened, and who are the losers when there is a lack of competition? The American people.

But our intrepid duo is convinced — convinced, I tell you! — that regulation and government intervention is the way to make things right for low-income Americans.

Watch her talk about the “public option” as Bernie sits there as though he’s about to be sick:

.@RepAOC "We should have a not-for-profit public option for basic banking services, and we should be piloting these projects through the @USPS" #postalbanking pic.twitter.com/dobyU4hdT2

This one right here:

By the way, she didn’t rule out the DMV as an option. 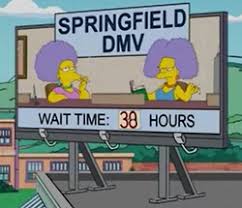 Yep, that looks about right.

I think we all can relate to Les Claypool’s 1993 lyrics about the DMV:

I’ve been to hell. I spell it…I spell it DMV
Anyone that’s been there knows precisely what I mean
Stood there and I’ve waited and choked back the urge to scream
Source: Genius Lyrics

It’s not just the ridiculousness of potentially giving out sub-prime loans to high-risk clients backed by a government agency that reported a $3.9B loss for the fiscal year 2018 — the 12th year in a row, by the way, it’s that she proposed a public option where there doesn’t need to be one. Has she not heard of a thing called credit unions? Those are not-for-profit and are quite popular.

But to a woman with a hammer (and sickle) everything looks like a government-issued nail.