For anyone who still naively thinks ‘appeasement’ is the way to bridge our divide with the Left, Cher’s over-reaction to a Trump tweet should dispel that theory.

They don’t want ‘common ground’, or our understanding, these totalitarian ideologues want the total destruction of any opinion that disagrees with them.

As Rush Limbaugh is fond of saying, ‘don’t doubt me on this’.

The proof is easy enough to find.

Trump — whose own position on the same-sex marriage issue is much more ‘moderate’ than many Republicans, an issue that has sometimes been used as a complaint against him from the Right — acknowledged ‘Pride Month’.

He did so in the context of calling attention to those nations where sexual behaviors that were once called ‘alternative lifestyles’ can land you in prison, or even have you executed.

Under his administration, American Ambassador Richard Grenell (a Trump appointee who happens to be gay) is leading an effort in the global decriminalization of homosexuality. 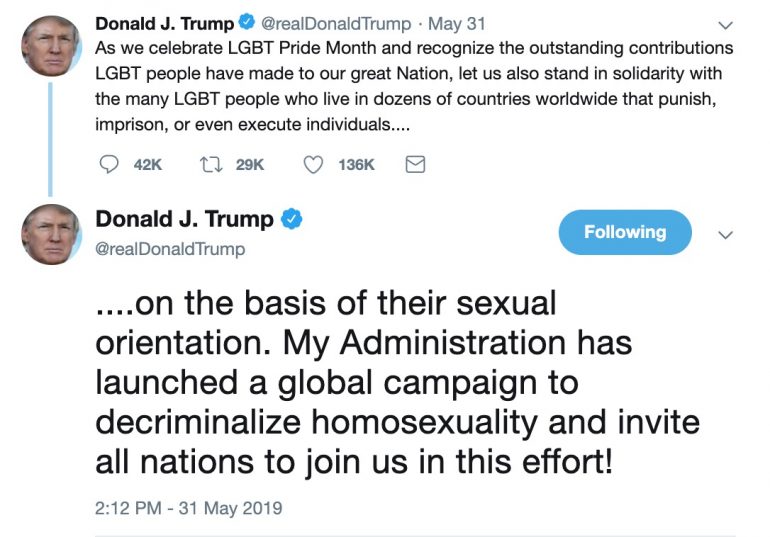 Cher’s response was just as rational as you might expect from someone who pledged to move ‘to Jupiter’ if Trump won the 2016 election. (Still waiting for her to make good on that promise.)

Because ‘shouting’ in all-caps, is a sure sign of rational engagement with an issue. Those angry Emojis certainly underscore just how cogent those arguments of hers really are, too.

Internment camps? Nope, that’s the domain of Democrats like FDR. Although, she might want to look into her heroine Margaret Sanger. That was her plan for what the government should do with the ‘unfit’ and the poor… which just happened to coincided with a particular ethnic minority.

By the way, has she ever spoken out about, say, Female Genital Mutilation, or countries where gays are routinely hanged or thrown from high buildings? Even the ‘Progressive’ UK has homosexual men feeling threatened because of a certain group who is violently opposed to Cher’s most cherished lifestyle. But she’s got nothing to say about that, right? Not even the courage to admit that not all cultures are as tolerant toward such practices as even the ‘dreaded’ Republicans and Christians are.

After all, Trump’s on very good terms with Netanyahu, has had one of the most pro-Israel foreign policies of any President, has a daughter who has converted to Judaism, and a Jewish son-in-law who is among his most trusted advisors… but that makes him ‘anti-semitic’, somehow.

This chick needs help. The professional kind. By comparison, she’s making even crackpot Rosie look like a thoughtful political pundit.