They’re not happy about Alexandria’s political showboating and have issued a letter to set her straight.

The first few months of her term in office have been characterized mostly by self-righteous indignation and finger-wagging.

Republicans are invariably ‘evil’ in her rhetoric and she’s never one to miss an opportunity to compare Trump and our immigration policies to the Third Reich and their angry little leader with the funny mustache.

How bad has it gotten? It’s gotten so bad the government of POLAND is sick of her showboating.

They’ve offered her a history lesson that could (if she’s capable of it) provide her with a much-needed dose of perspective, not to mention humility.

(Not that we’re holding our breath on a Zealot of the Leftist cause being capable of either.) 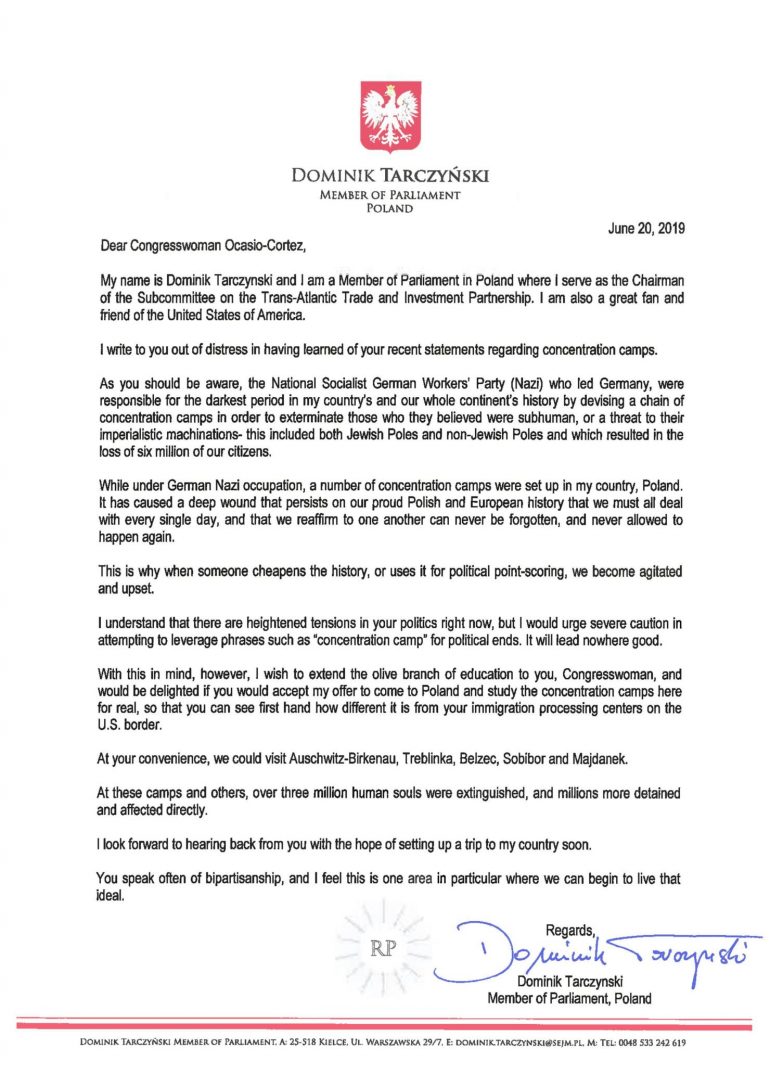 “While under German Nazi Occupation, a number of concentration camps were set up in my country, Poland. It has caused a deep wound that persists on our proud Polish and European history that we must all deal with every single day and that we reaffirm to one another can never be forgotten, and never allowed to happen again.

This is why when someone cheapens the history, or uses it for political point-scoring, we become agitated and upset.

I understand that there are heightened tensions in your politics right now but I would urge severe caution in attempting to leverage phrases like ‘concentration camp’ for political ends. It will lead nowhere good.

With this in mind however, I wish to extend the olive branch of education to you Congresswoman, and would be delighted if you would accept to come to Poland and study the concentration camps here for real so that you can see first hand how different it is from your immigration processing centeres on the US border.

At your convenience, we could visit Auschwitz-Birkenau, Treblinka, Belzec, Sobibor, or Majdanek.

At these camps and others, over three million human souls were extinguished and millions more detained and affected directly.

And maybe Ilhan Omar should go with her.

Ilhan Omar agrees with AOC that ICE has "concentration camps" on the border because there are "camps and people are being concentrated."

Is she REALLY that ignorant or is she blowing off the holocaust?

Not that we’re holding our breath.

It’s hard to learn something when you think you already know everything.

It’s not her popularity that makes AOC dangerous. It’s her arrogant brand of ignorance.