While almost never used in part of mass shootings, because it’s often used in Hollywood, expect the Left to make this the focal point of their next organized outrage event.

The guy who brought his gun to work so that he could shoot up the place (for whatever reason) had a special accessory on the gun he brought, where he took down twelve victims before getting shot himself in an ‘intense firefight’ with police.

He was outfitted with a suppressor.

Police say the suspect was armed with .45 caliber handgun with a silencer, believed to be used for stealth and to keep victims from knowing where the attacker was in the building.

Survivors of the attack said they were caught off guard and initially puzzled by what was happening. One described hearing something that sounded like a nail gun. The gunman brought numerous extended magazines loaded with ammunition, which carry more rounds than traditional magazines, police said.

…The gunman was killed in an “intense firefight” with four responding officers who hemmed him in and likely prevented him from using his load of ammunition on more victims, Police Chief James Cervera said.

One police officer was shot in the stomach during the standoff, but was saved from serious injury by his bulletproof vest.

The four officers had scoured the building, searching for the shooter. They discovered him on the building’s second floor and engaged him in a gunbattle. The suspect fired numerous shots through an office door and wall toward the officers before the gunfire stopped, Cervera said.

That’s when officers decided to enter the office and engage the shooter. “That’s not an easy decision to make,” Cervera said. “There’s an individual on the other side of the door. He has a gun. He just shot one of your officers.”
Source: USAToday

We keep having ‘national conversations’ about what to do about people who bring a gun to a ‘safe’ space and start laying waste to friends, colleagues or strangers, but maybe those conversations are focused on the wrong issues.

After Sandy Hook, the collective response of the writers and opinion editors here at ClashDaily were gathered into a book on the topic that is as relevant today as it was that day a single tear rolled down Obama’s cheek.

Sandy Hook Massacre: When Seconds Count – Police Are Minutes Away 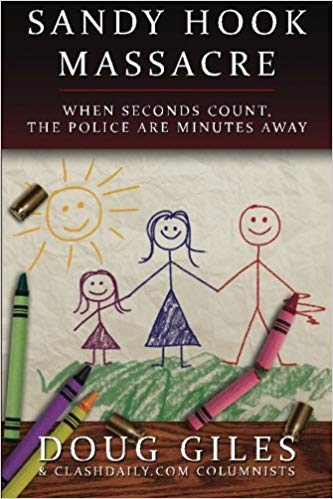 “Doug Giles and his team over at ClashDaily.com cut through the crap to expose what have become modern day human slaughter houses: gun free zones. Their candid arguments about allowing teachers to protect themselves and the students in their care through concealed carry should be taken seriously. As a result maybe, just maybe, we’ll be able to save some lives someday rather than call the cops to report the body count.” – Katie Pavlich. News Editor, Townhall.com