Remember when the Vietnamese fled the coming Communists, risking flight by sea rather than prison or death? Biden couldn’t care less.

With one of the BIGGEST questions on the 2020 ballot being whether or not America should have secure borders or not, a candidates core values on that question might matter. Especially in a time when any misstep from ANY time in history can be enough to destroy you completely.

The thing about being a chronic flip-flopper in this day and age — the public record is now at EVERYONE’s fingertips, not just a few intrepid journalists who may or may not want the story uncovered in the first place.

Biden is clearly NOT a man of deep principles. We don’t even have to look to history to know this. We can look at the last debate.

“Who here would abolish their private health insurance, in favor of a government funded plan.”
*only Harris and Sanders raise their hands*
*Biden after the audience starts cheering for them pic.twitter.com/M3zp8mV3NC

Real leadership doesn’t lick it’s finger and test the wind before making a decision. We’ve tried that already. We called it ‘leading from behind’, and it didn’t work out so well.

We DO have a baseline against which to compare Biden’s attitudes toward refugees — not people changing address merely looking to increase their standard of living, but REAL refugees fleeing from real political persecution.

Joe Biden, the 2020 Democratic presidential front-runner and advocate of large-scale immigration, once tried to block the evacuation of tens of thousands of South Vietnamese refugees who had helped the United States during the Vietnam War.

As a senator, the future vice president, now 76, was adamant that the U.S. had “no obligation, moral or otherwise, to evacuate foreign nationals,” dismissing concerns for their safety as the North Vietnamese Army and Viet Cong swept south toward Saigon in 1975.

His position was in stark contrast to the one he took nearly 30 years later over Iraqi and Afghan interpreters who had worked with U.S. forces. “We owe these people,” his then top foreign policy adviser Tony Blinken said in 2012. “We have a debt to these people. They put their lives on the line for the United States.”
Source: WashingtonExaminer

Ironically, that news story connects to ANOTHER story in the news that is (or should be) embarrassing to Biden if he’s even capable of shame.

Remember the reporter that got hospitalized by Antifa: Hey PartisanPress: Your Buddies At Antifa Just Beat Up A Reporter — Is THAT News?

It just so happens that his parents fled to America from the jackboot of the communist government.

“My mother came from a family that was labeled bourgeois or middle class. They owned a jewelry business in their home which was taken after the collapse of the South Vietnamese government,” Ngo said. “They were thrown into the labor camp. My mother was only 16 at that time.”

His father was a police officer in a small coastal town — a good job during the war, but one that could easily get you shot afterward.

So in 1978, the family escaped by boat and ended up in Oregon, a new home mostly inhabited by white people.
Source: OPB

Biden would have refused sanctuary to those who were our allies in the Vietnam war, yet in his video launch of his candidacy, he spoke glowingly of Antifa. Remember? We documented it here: Creepy Joe Biden Joins The Race With A Video Pushing the Charlottesville Lie

After a lengthy melodramatic depiction of the Charlottesville protesters with the tiki torches, he says they were met with a ‘courageous group of Americans, and a violent clash ensued’.

Congrats, Biden. You just cheered a group of violent Anarchist terrorists as ‘courageous Americans’. Great judgement you’ve got there. What did we really expect from a guy who claims that: 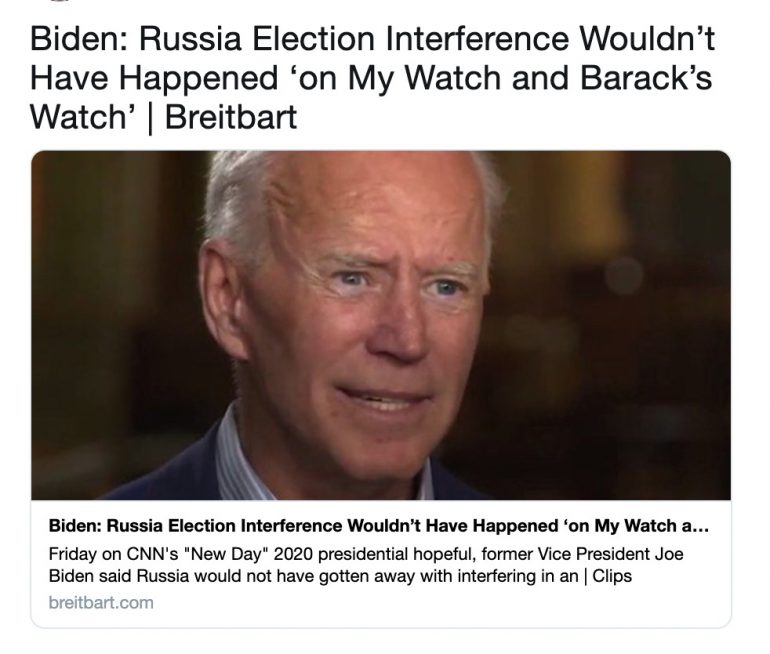 Who does he THINK was in office back in November of 2016? Is he just not that bright, or was #SleepyJoe just asleep for, well, all of his time in office?

How hard would it have been to agree with Trump that there were BAD people on both sides? Or were you too busy massaging the narrative to notice he denounced the KKK AND Antifa in that same presser you tried to club him with?

No wonder former Defense Secretary Robert Gates has been quoted as saying he’s been “wrong on nearly every major foreign policy and national security issue over the past four decades”:

“Frankly, I believe it. The vice president, when he was a senator — a very new senator — voted against the aid package for South Vietnam, and that was part of the deal when we pulled out of South Vietnam to try and help them survive. He said that when the Shah fell in Iran in 1979 that that was a step forward for progress toward human rights in Iran. He opposed virtually every element of President Reagan’s defense build-up. He voted against the B-1, the B-2, the MX and so on. He voted against the first Gulf War. So on a number of these major issues, I just frankly, over a long period of time, felt that he had been wrong.”
Source: Robert Gates, Politico

Biden is doubling-down on his support for free healthcare for illegals,  but it looks like his strategy to move left with the rest of the pack is hurting him in the polls. He could have easily carved out that moderate spot, but he decided to follow the rest of the leftist lemmings off of the Socialist cliff. Or maybe it’s that he’s just not far left enough. Either way, he’s dropped to third place both in Iowa and nationally.