They were targeting Andy Ngo by name the day before, and now he’s got a brain bleed — where are the Left and the LGBT to stand up for him?

Ironically — but not surprisingly — it’s the Right who are standing up for him and his rights as both a journalist and a citizen, while Christians are praying for his speedy recovery.

Andy Ngo has been doing something few reporters have been brave enough to do — chronicling the periodic riots (so-called ‘protests’) that arise when Antifa decides it’s time to terrorize Portland. (Notwithstanding the heroic courage a certain Jim Acosta assures us that he personally displays on nearly a daily basis.)

Here’s Mr. Ngo talking to police after the attack. (Where were they when it happened? Good question. Others have wondered the same thing.)

Andy was on hand because he knows the kind of havoc these thugs are capable of unleashing. Havoc like this man getting beaten bloody with a crowbar:

This is Antifa. Here’s a group of masked thugs beating an elderly man in Portland with a crowbar and macing him. https://t.co/xYzDcXiEnn

It was hardly the first time they were showing their violent side:

Those scenes have been playing out on the streets of Portland for more than a year now, @tedwheeler has tied the hands of the @PortlandPolice, and ANTIFA has been controlling the streets, terrorizing citizens, journalists, the young and the old.

It's time to send in the Feds! pic.twitter.com/7qFSLtqqOS

When he went to do his job and report on the ‘protest’ he got attacked, just as they promised he would. That speaks to premeditation in their violence. This tweet was posted BEFORE the event.

Stay safe.
It's important to have honest journalists like yourself in what I understand to be a slice of the political spectrum that normally toes the party line.

Notice, yours truly was concerned for him as well. (My tweet was Eastern Time Zone, for anyone keeping score.)

Since he’s a gay man targeted (by name) for violence by masked thugs during Pride Month, you’d expect the usual suspects on the Left to rush to his defense, right?

It’s unreal that a minority gay man was brutally attacked during #Pride2019 & hardly anyone that claims to support the LGBTQ community seems to give a damn.

The double standards are insane. https://t.co/XelLmvXPyW

Oh, right. He’s a minority too. Did we not mention that yet? His parents were refugees from Vietnam.

“My mother came from a family that was labeled bourgeois or middle class. They owned a jewelry business in their home which was taken after the collapse of the South Vietnamese government,” Ngo said. “They were thrown into the labor camp. My mother was only 16 at that time.”

…“Even though I am a sexual minority and I’m a person of color, I come from a family who were refugees so I feel so lucky to be able to have been born and raised in this country,” Ngo said.

“So yeah, when I see the American flag, I feel a sense of pride and honor of being part of that. And I regret that a lot of people see it as a symbol of violence that should be burnt.”
Source: OPB

No wonder they don’t like him — he stands as a living repudiation of the Left’s identitarian victim-class politics.

And now they’ve turned the guy who’s very life repudiates the lie of their ‘oppressor’ narrative into an ACTUAL victim of PHYSICAL violence. Antifa, as we remember is the hate group that (former Maoist) Don Lemon, Chris Cuomo and a few other Lefty broadcasters seem to have a soft spot for.

"No organization is perfect" — Don Lemon on Antifa pic.twitter.com/rarxEwcuR7

But Lemon somehow gets bent out of shape when Trump said ‘good people on both sides’ in a way that absolutely denounced violent extremism on left AND right.

Brian Stelter reported on the attack against Ngo — sort of. What he left out is more informative than what he actually included:

Respectfully, @brianstelter, why did you edit out the part where Antifa punched and kicked the journalist? What’s going on here? https://t.co/pLZMEDrdMX

We’d consider that ‘deceptive editing’. Why would the ‘great defenders of free speech’ at the apples-and-bananas network want to hide the full extent of the violence perpetrated on a freaking colleague?

Has it not occurred to anyone there that it could have just as easily been one of their own that got attacked? Or maybe that’s the point.

The partisan hacks Snopes got caught dismissing it as merely an ‘alleged’ attack, despite video evidence to support it:

Yes, @MrAndyNgo just “said” he was attacked by Antifa, there isn’t video of it or anything, you dumpster fire of a “fact checking” website.

Also lots of what Quillette has published lately is crap, but they aren’t conservative, they’re actually purging the more right voices… pic.twitter.com/JDI3WJxG6w

So what exactly did they DO to Andy Ngo? They beat the hell out of him, left him with a bleeding brain and they robbed him of his video equipment.

Police have received information that some of the milkshakes thrown today during the demonstration contained quick-drying cement. We are encouraging anyone hit with a substance today to report it to police.

This reaction was typical of the Left: 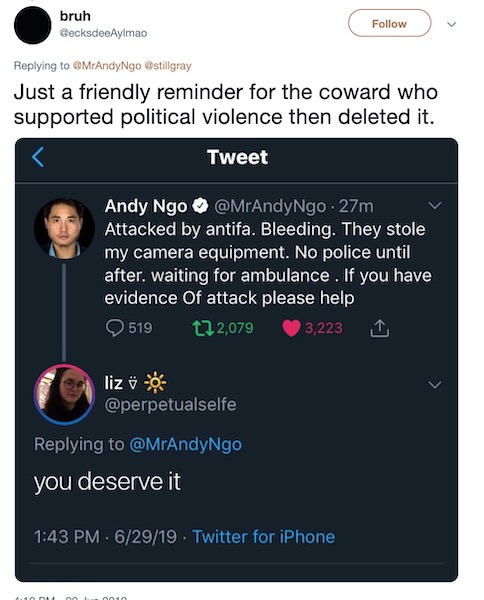 There's a video with a different angle of the brutal assault of Andy Ngo. (via @michellemalkin)

If only someone had been warning about the Left’s use of slanderous labels, then saying words are violence, then calling everyone a Nazi and finally saying it’s OK to punch Nazis.

I tweeted this back in January when blue check “journalists” were calling for violence against high school kids. It’s just a preamble to what happened to @MrAndyNgo. They will excuse and promote violence against anyone who dares have a thought against their secular religion. https://t.co/se16ckzILQ

And let’s not forget:

This might be a good time to bring up Biden’s explicit defense of Antifa on no less than the day he launched his bid to be President. Seemed cynical then. Seems straight-up dangerous now. Remember the video he launched with?

Opposite the white supremacists, he hails as heroes the other group of protesters some of whom were simple counter-protesters, but some of whom were the Antifa agitators who had an established reputation of violent confrontation with bystanders using pepper spray, blunt instruments, or even makeshift grenades with wine bottles and quarter sticks of dynamite. Real ‘heroic’ people you’re cheering there. — Video and text here: ClashDaily

If THIS is what the Left is offering as their vision of America’s future, it’s a good thing we’ve got a fighter running and not some milquetoast politician like the LAST two guys the Republicans dug up to represent us.