Whoa! Does this make these Congresswomen racist?

Calling for deportation is “racist” — isn’t that what we were told by the Democrats and The Media(D)?

Well, their reaction here should be interesting.

A former Democratic New York State Assemblyman has unearthed an inconvenient tweet posted by Rep. Rashida Tlaib(D-M) from 2015 and he retweeted it with some intriguing questions and an even more intriguing hashtag.

Dov Hikind tweeted: “So Rashida can call for deporting then candidate Trump, but there’s total outrage when the sentiment is returned?! How does this ‘standard’ work? #DemDuplicity”

So Rashida can call for deporting then candidate Trump, but there’s total outrage when the sentiment is returned?!

Just in case the tweet by Rep. Tlaib somehow gets lost on the internet, here’s a photo for posterity. 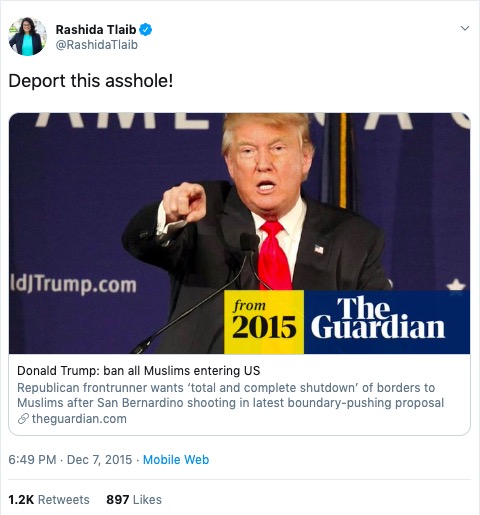 The tweet was in response to then candidate-Trump calling for a “Muslim ban” in the wake of the San Bernardino terror attack by Islamists.

Also recall that when The Squad held their press conference to condemn the President’s tweets, Rep. Tlaib had expressed her concern about the “language” used by the President while she has called him an “assh*le” and a “motherf**ker” publicly.

But then, Tlaib isn’t exactly known for her ability to restrain herself.

Hikind also found a tweet posted by Rep. Ilhan Omar(D-MN) from 2012 also calling for people to be deported.

EVIDENCE: @IlhanMN told an opponent “why don’t we deport you to where ever you came from” in 2012!!

You can’t make this stuff up!

Retweet so her duplicity is exposed for all to see! https://t.co/fGv0ECZaOJ

Rep. Ilhan Omar has repeatedly made anti-Semitic remarks and managed to bypass any censure by Speaker Nancy Pelosi. Rep. Omar continues to sit on committees. The Media(D) has been silent on the rather salacious scandal surrounding her tax filings, marriages, and possible fraud and perjury, for fear of being called racist or Islamophobic. Like many other things, Ilhan Omar refuses to comment on any of it.

She’s also said that the President is pushing an “agenda of white nationalists.” Lately, she’s been doubling-down on calling President Trump racist.

But don’t call her a racist.

And don’t ask her to denounce Al Qaeda.

Or ask if calling to deport political opponents is actually racist if she does it.

Well, that seems a bit hypocritical, no?

It seems that it’s perfectly fine to condemn President Trump and anyone that votes Republican for a crude paraphrase of a common bumper-sticker slogan, “America: Love it or Leave it!” but Ilhan Omar gets a pass on all of her statements and behavior because she’s brown-skinned, a refugee, and is Muslim.

No, that’s actually racist. We should be able to call her out for her statements as well. That’s the whole point of treating everyone as equal.

It seems that the modern Democratic party is no longer for equality but instead wants special status for certain groups.