*Update*
Editor Apologies for typos where the wrong first name was at times incorrectly used in title and body copy.
*end update*

What does CNN do for an encore? Run some subtitled Hiter speeches? Hire a writer from Stormfront?

CNN literally wants it both ways.

You know all that political violence these days that traces itself back to the justification of ‘punching nazis’, right? And on Trump’s Inauguration Day, some moron in a black mask sucker-punched Richard Spencer while he was being interviewed on the street by some reporter.

They have hosts like Don Lemon and Chris Cuomo who praise the supposed good intentions of Antifa as being ‘anti-fascists’ (‘it’s right in the name’) and downplay their tactics of chucking bricks, throwing bottles of urine, smashing people’s heads with bike locks etcetera as being good intentions taken too far. Or something.

And we ALSO remember that certain guests who actually work in the White House were considered beneath the dignity of CNN associating with them. 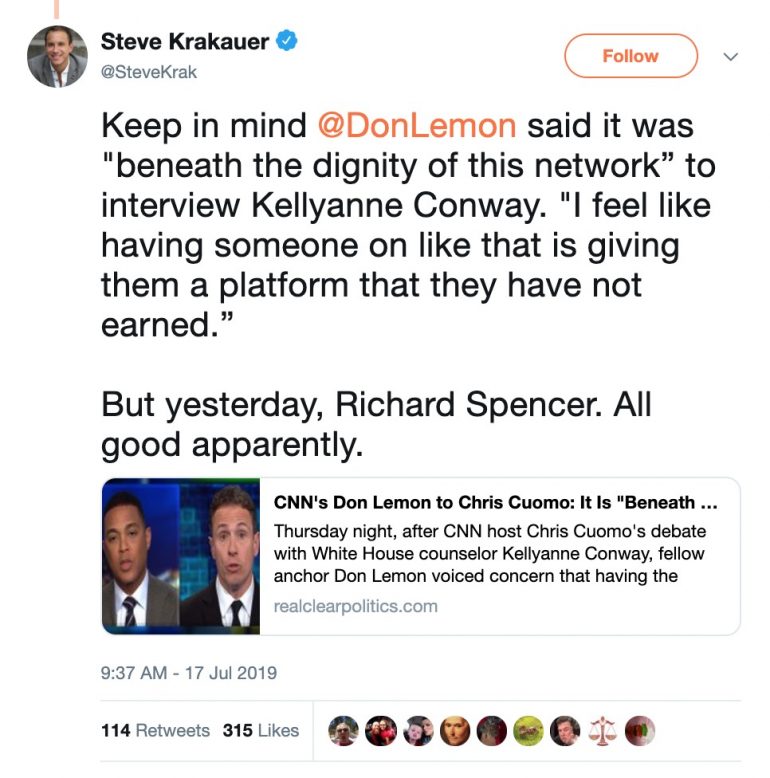 What ELSE do we know about their priorities?

Antifa attempted to BOMB a federal building this past weekend, which could have been a mass casualty event. But CNN’s talking heads were far more interested in the president’s ‘mean tweets’.

Remember how Faith Goldy, while reporting in Charlottesville allowed herself to be interviewed by the wrong people, and both she and her right-of-center news organization were broadly tarred as racists? (She lost her job over it.) 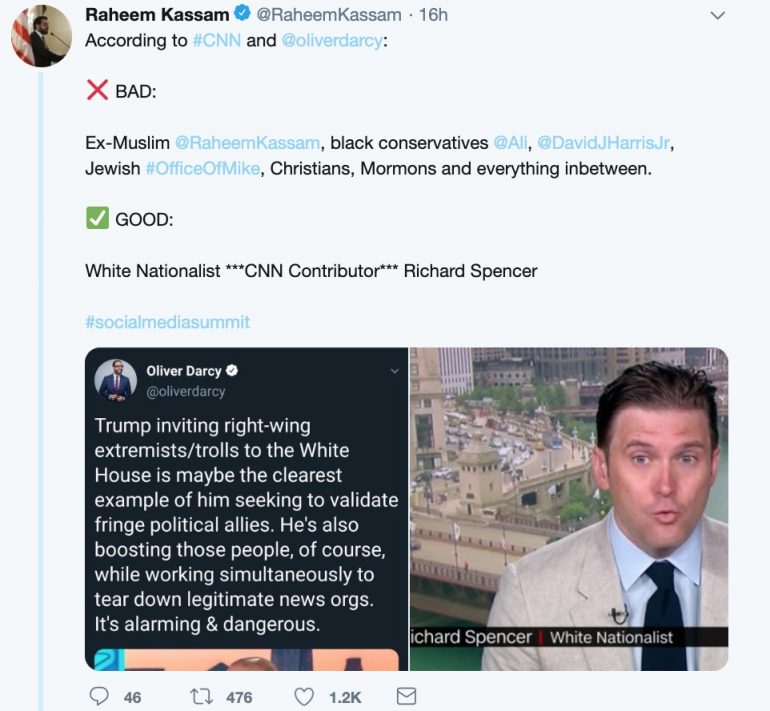 How is it that after all that, CNN — whose employees have led the charge for deplatforming competitors in the new media — (looking at you Oliver Darcy) can host self-acknowledged White Supremacist Richard Spenser after all of this?

Just like they did with Avenatti, they will put ANYONE on their network that is willing to vilify Trump. Watch how they spin this interview with Spenser who hates Trump.

This is still over Trump’s mean tweets, mind you. (Notice they’re not talking about the firebombing of the ICE building?) They are pretty transparently desperate to tag Trump as racist and keep minorities from pulling the lever for him.

At the 1:34 mark, they have “CNN Contributor Richard Spencer” on to analyze politics, evidently playing the same role that Jeff Flake and Ana Navarro have. ‘Those other’ white supremacists love him, but ‘I’ don’t anymore. 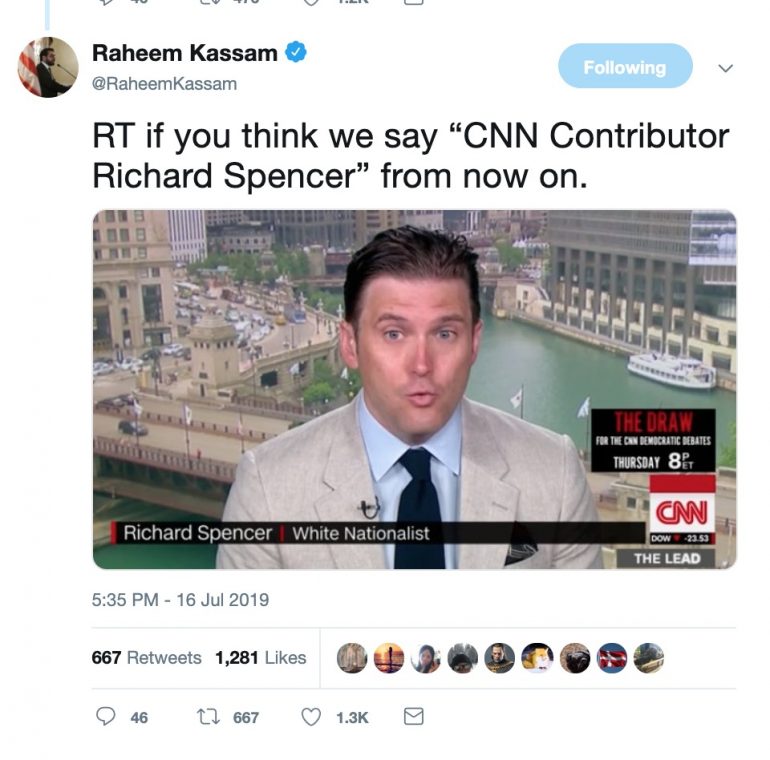 He claims Trump says racist things, merely parroting established CNN talking points at this part of the conversation, but that his policies FAIL to DO racist things.

Catch that? He’s all talk and no real racism, even by someone who is LOOKING for racist policy.

They want Trump to be poisoned by guilt-through-association.

Are you SURE you want to play this game?

A WHOLE lot of Dems gave a former recruiter for the KKK a fine eulogy… including some of personalities right at the top. Keith Ellison, former Deputy Chair of the DNC has connections to Louis ‘Death To America, Death To Israel’ Farrakhan. And Obama had a photo of him with the Black Congressional Congress suppressed until AFTER his Presidency. Even Booker has spoken warmly of people from Farrakhan’s Nation Of Islam.

It’s worth noting that David Duke is ANOTHER famous white supremacist who is NOT a Trump supporter. Who does he like these days? It might surprise you.

In the spring, it was Tulsi Gabbard.

Former KKK leader and White Supremacist David Duke has offered his support for Tulsi Gabbard and her foreign policy views.

Let's see how many leftists make a big deal out of this. They made this a front page news story when David Duke made comments in support of Trump in 2016.

Why would Duke possibly praise a Somali woman? Could it be these slugs are driven not so much by being ‘pro-white’ as being ‘anti-Israel’?

Now… will CNN run a story tagging these people as politicians who draw racist followers? Of course not.

Let politicians stand or fall on their actual record. Not who does or doesn’t cheer for them, or the narratives news personalities on CNN want us to believe about them.