The news of Saikat Chakrabarti stepping down as AOC’s chief of staff on Friday got lost in the wake of the tragedies over the weekend.

But it’s really important for a couple of reasons.

It’s a Win for Speaker Pelosi

The lesser reason is that this is a win for Speaker Nancy Pelosi and the more “moderate” Democrats (whatever that means these days.)

Chakrabarti and the spokesman for Ocasio-Cortez, Corbin Trent, tendered their resignations on Friday. Trent is heading to her re-election campaign, and Chakrabarti is joining a non-profit organization that focuses on climate issues called New Consensus.

Officially, the moves were long-planned. More likely, AOC sacrificed both hotheads to appease Speaker Nancy Pelosi. Chakra­barti’s venomous tweets slamming other Democrats were the trigger for last month’s tiff between the speaker and The Squad.
Source: New York Post

Chakrabarti’s tweets were really quite horrendous. In one, he criticized freshman Representative Sharice Davids(D-KS) who is a gay, Native American woman who flipped a red district blue, as “perpetuating a racist system” with her votes.

Chakrabarti attracted derisive attention from the House Democrats’ official Twitter account late last month when he said that moderate Democrat Rep. Sharice Davids (Kan.) was “[enabling] a racist system” through her votes. The fact that Davids is a gay Native American did not seem to matter to him. Nor did the political realities she faces. (She flipped a suburban Kansas City seat in 2018 that voted staunchly Republican before Trump.) The only thing that seemingly matters to Chakrabarti is that she hasn’t supported a revolutionary uprooting of the United States’ political and economic systems. 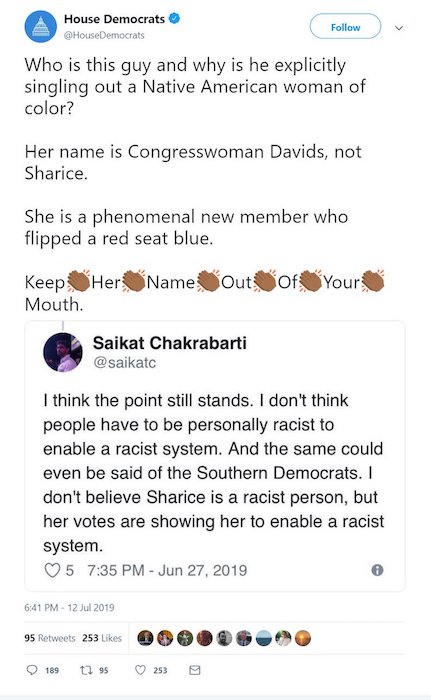 He also said that Blue Dog Democrats should be relabeled as “New Southern Democrats” and equating them to the Dems that were gung-ho on government-sanctioned racism in the form of Jim Crow. 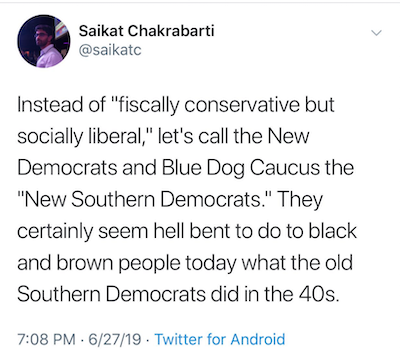 Chakrabarti was one of the four founders of Justice Democrats, the PAC that is pushing for far-left candidates to run for office. All four members of “The Squad” are members of Justice Democrats — Rep. Alexandria “Occasional-Cortex” Ocasio-Cortez(D-NY), Rep. Ilhan “Married Her Brother” Omar(D-MN), Rep. Rashida “Impeach The MF” Tlaib(D-MI), and Rep. Ayanna “Forgettable Moesha” Pressley(D-MA).

It exploded when AOC implied that Nancy Pelosi was racist for calling out the attention-loving, Justice Democrat sh!t-disturbers in Congress.

Remember, AOC and Chakrabarti had threatened to primary those that disagreed with the far-left policies and were “making a list.”

That’s why Justice Democrats, the group Chakrabarti helped found, continues to recruit primary challengers to Ocasio-Cortez’s colleagues. It’s nothing personal, mind you. They’re just in the way of the revolution.

One of the primary policies was Socialism.

Chakrabarti let the cat out of the bag in a recent extensive profile in The Post magazine. According to the report, Chakrabarti told an aide for Washington Gov. Jay Inslee (D), a presidential candidate, that his boss’s Green New Deal “wasn’t originally a climate thing at all.” “Do you guys think of it as a climate thing?” Chakrabarti says, “Because we really think of it as a how-do-you-change-the-entire-economy thing.” You can’t get much more revolutionary than that.

We all knew that the Green New Deal was about socialism and not about cow farts. It was a way to exert government control over people’s lives and make the choices for them because, well, the unwashed masses couldn’t possibly be able to make wise decisions on their own. Better to limit their choices or just make them on their behalf. The Green New Deal was utterly ridiculous and would result in the elimination of beef. You’d think that Saikat, who has been spotted eating a burger on occasion, would perhaps stand up for America’s food staple. Alas, some sacrifices must be made for the good of the cause, eh, Komrade Chakrabarti?

All of that aside, the more important reason is likely due to the feds investigating some possible campaign finance shenanigans with the Ocasio-Cortez campaign.

ClashDaily reported on this back in March, but here’s a quick summary.

But they funneled more than $1 million in political donations into two private companies that Chakrabarti also incorporated and controlled, according to Federal Election Commission filings and a complaint filed in March with the regulatory agency.

In 2016 and 2017, the PACs raised about $3.3 million, mostly from small donors. A third of the cash was transferred to two private companies whose names are similar to one of the PACs — Brand New Congress LLC and Brand New Campaign LLC — federal campaign filings show.

PACs must follow strict reporting on income and spending directed by federal regulations, but private companies are exempt from the same rules.

The complaint filed by the National Legal and Policy Center, a government watchdog group based in Virginia, alleged that the LLCs appeared to have been set up to obscure those federal reporting requirements.

In March, when the FEC complaints were filed, a lawyer for the PACs, the LLCs and the Ocasio-Cortez campaign told the Washington Post that the arrangement “fully complied with the law and the highest ethical standards” and that Chakrabarti never profited from any of the political entities he formed.

They may also have violated the $5,000 limit on contributions from federal PACs to candidates, according to the complaint. It is not known if any of that money flowed to Ocasio-Cortez’s campaign.

Feds are investigating whether this money was funneled back into AOC’s campaign coffers. If so, that fall into the “dark money in politics” that she rails against.

What? A hypocritical Democrat? Perish the thought!

In addition, AOC changed some of the rules in her office governing staff salaries to implement a “living wage.” The salary of her chief of staff, however, was cut almost in half, which seems odd.

Although Ocasio-Cortez raised the salaries of junior staffers in her office to just over $52,000 a year, Chakrabarti took a massive pay cut. The Harvard graduate and tech millionaire agreed to an annual salary of $80,000 — far less than the $146,830 average pay for his position.

Because his salary was less than $126,000, congressional rules exempted the chief of staff from having to disclose his outside income.

So much for her talk about getting the corruption out of Washington.

It seems that once AOC hit D.C. she became a regular Swamp Thing.