Look who’s so convinced that Republicans are ‘evil’ they have to dream up reasons why cleaning up the inner city is a BAD thing.

Back before the Left normalized Big Government projects as the all-purpose answer for EVERYTHING, communities had a much different solution for local problems. They got together and solved it.

But dark-Blue districts in the big city have been so acclimated to the Big Government model of asking for help but never quite getting the problem solved, they’re left scratching their heads when communities behaved like… well… communities.

Suspicious narrow souls that they are, ‘sinister’ motives were dreamed up. After all, they have already doubled down in assuming the criticism of the crime-ridden, neglected district in Baltimore was a criticism of Baltimore’s demographics, rather than the gross incompetence of their long line of Democrat ‘leaders’.

To see the ‘evil’ conservatives doing something out of the goodness of their heart left them confused. This was the title of an op-ed in the Baltimore Sun: “We assume it was pure motives that led a Trump supporter to launch a cleanup in Cummings’ district, right?”

“Call us skeptical,” it said.

Look, we appreciate anyone who is willing to roll up their sleeves to help Baltimore. More than 170 people came from all over the country and cleaned up nearly 12 tons of trash, according to Mr. Presler’s Twitter feed. He doesn’t post any photos of the totality of the trash, so we’ll have to take his word for it.

But if this was all about “Americans helping Americans,” why all the videos of Baltimore residents thanking Mr. Trump for bringing attention to the issue? We happen to know that not everybody in West Baltimore feels that way. And in the same posts as the videos, why the frequent reminders that this is in act Mr. Cummings’ district?

The press didn’t mind dog-piling on the alleged racism of the President AND his supporters, but when those same MAGA voters put their sweat equity where their mouth was — with photo proof on social media (which, in turn brought OTHER people out to help) — they assumed it was merely a political event. (We remind the Sun that nobody stopped the Dem supporters from pitching in… anybody could have lent a hand.)

Here’s one of the photos they used to make the case in their scathing oped:

We found this newspaper while cleaning up trash in West Baltimore.

Here’s another one the organizer posted: 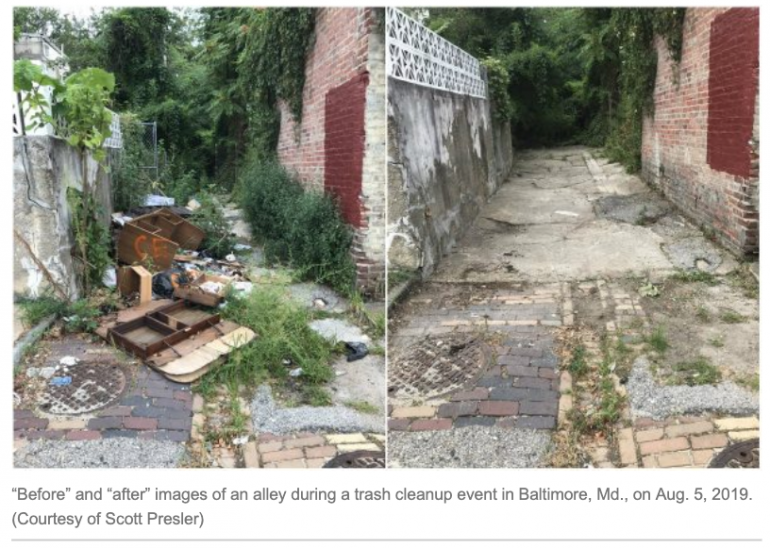 In answer to it, right on cue, a Conservative philanthropist has called their bluff.

My teammates and I will pledge $100,000 to Baltimore neighborhood clean up (I know a thing or two about that!) in Baltimore if the Baltimore Sun retracts this article that discourages people who want to help the City, when the amazing residents want them help! https://t.co/0vh444NAaM

Make a decision Baltimore Sun — what’s more important to you? Getting a partisan dig in, or getting $100k worth of clean-up in a city that’s buried in years of neglect?

Some of our Related Baltimore Stores:

Is It ‘RACIST’ To Ask Elijah Cummings To Account For The $16B Trump Gave Baltimore?

WATCH: Bernie Thought Baltimore Was A SH*THOLE Long Before Trump Did

And just in case you think the deterioration of Baltimore is something conservatives have just noticed SINCE Trump’s tweets, here’s a story from 2017: AMERICANS STEPPING UP: Locals Address Crime-Plagued Baltimore

Teaching Kids That America Is Hopelessly Racist
May 5th, 2021 Sons of Liberty Media