In a tragic case that would bust anyone’s irony meter, we see another sad example of why border security matters. The man who killed him was slated for deportation 8 months ago.

While some certainly leverage the issue for political gain — in fact, the Democrats are on record as having it be a political game-breaker — it’s obvious that there are many well-meaning activists who take up this cause believing they are doing some sort of a great public good.

And when such a person swells the unfortunate ranks of ‘Angel Families’ it makes all of their advocacy so much more heartbreaking. Killed by the very people they were trying so hard to defend. But that’s the dividing line, between both camps, isn’t it?

Nobody denies the great benefits of coming to America from some other part of the world where opportunities are so different. But we require safeguards and lawful entry for a reason.

We want — so far as we are able — to screen out those people who have no respect for our laws or our lives.

Here is a photo of the victim, Sean Buchanan, and his family: 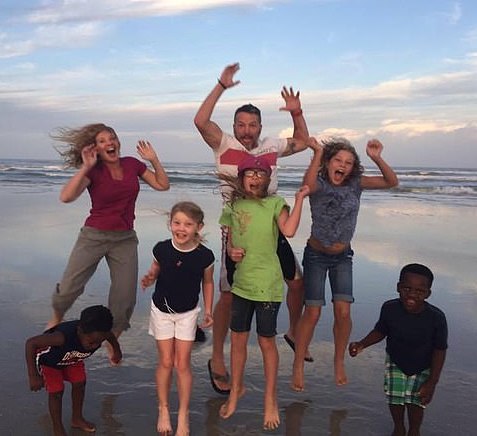 Sean Buchanan, 45, was driving northbound on Highway 83 on August 2 when Colorado State Patrol say a southbound truck operated by Miguel Ramirez Valiente went off the side of the road, then over-corrected into the wrong lane and crashed into Buchanan’s bike, killing him.

Valiente, an undocumented immigrant who was slated for deportation eight months earlier, was charged with misdemeanor careless driving with a revoked license in the deadly accident.

In an ironic twist, Buchanan was known among friends a passionate advocate for all immigrants.

…Valiente has a criminal record in Colorado that includes a 2018 conviction for a DUI charge, which earned him a year’s probation and the revocation of his license, and a guilty plea to a charge of reckless endangerment in a child neglect case.

On August 1, less than 24 hours before the deadly crash that killed Buchanan, Valiente’s probation was extended because he had failed to complete his court-ordered treatment program and community service.

He made national headlines in January when he sought sanctuary at All Souls Unitarian Universalist Church in January to avoid deportation to El Salvador during the federal government shutdown.
Source: DailyMail

Unfortunately, this isn’t the first such story we’ve covered. Nor is it likely to be the last. We obviously don’t report them all, but here are a few other stories about American lives cut short by someone who had no lawful reason to be here in the first place.

Not EVERYONE has to be bad for this to be a threat worth taking seriously. Just enough of them that we are forced keep reporting stories like these:

Dear CNN: Illegal Alien Kills Girl, Stuffs Her In A Suitcase And Dumps Her In A Ditch – Is That ‘News?’

Dear CNN: Another Illegal Alien Rapes & Kills An Innocent Woman – Is That ‘News?’

Cher Sounds Like A CONSERVATIVE Over L.A.’s Illegal Alien Invasion

Remember when Obama famously wiped that tear saying ‘if it saved just one life’?

That’s our point exactly. And there ARE ways we can stop it — if someone will ever strap up the political will to do so.