What else did he think the radical ‘resistance’ left was going to do with his information?

His party is the one that is targeting a fitness business for boycotts because one of the financial backers is a Trump supporter. (Even though the company itself is fairly liberal.)

Even MSNBC could see this coming and questioned him on what would happen to the people whose names he ‘outed’.

He seemed genuinely surprised by anyone objecting. “It’s public information.”

He’s right, it is ‘public information’. But so is land ownership. That doesn’t mean we go the courthouse, dig up your home address and publish it, does it? This is, after all, the same party that had a BLM leader (and friend of Elizabeth Warren) show up outside Mitch McConnell’s house after dark with a loud mob screaming profanities at him.

The ‘resistance’ mobs don’t usually go researching people in looking for reasons to be offended. But they’re more than happy to read from someone else’s script. A single tweet can trigger a big reaction. Or have we already forgotten

It didn’t take long for that to happen, now did it?

Here are the harassing phone calls one person on that list is getting. (Language warning.)

A woman,who was on the Donald Trump donor list that Joaquin Castro tweeted out, received a vicious voicemail calling her a racist and threatening to post her number and extension all over the internet.

This is now the left operates. We must stand strong
⚠️ graphic language pic.twitter.com/NvLRLX53VH

There is one other suspicious omission from that list that was noted by observers online. 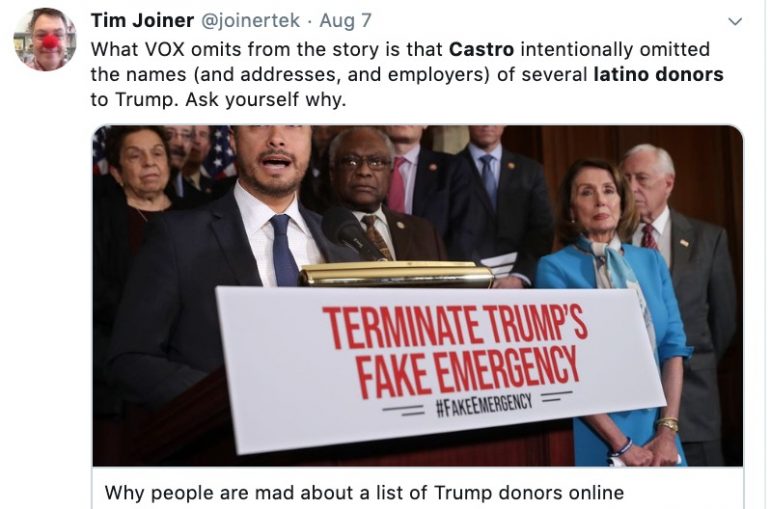 Way to unleash your ‘inner Castro’ there, Joaquin…

With the high number of Latinos in San Antonio, why are no Latino surnames on his list???
With People like McConnell being surrounded with people shouting death threats is Castro providing a target list for Antifa Terrorists?

Maxine Waters Says, ‘God Is On Our Side’ In The Public Harassment Of Trump Aids – Is She High?