The old guy must be missing a step. He doesn’t even seem to notice.

Signs can make or break a politician.

Dubya, as we remember, was forever haunted by that ‘Mission Accomplished’ banner hung when he visited for a photo op. (The mission continued with no end in sight, and people never let him forget it.)

Hillary, in a serendipitous campaign moment, got trolled by the way her own name and character flaws were perfectly framed in one photo. 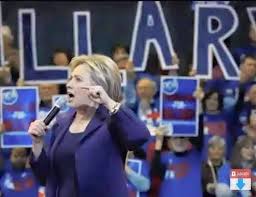 And protesters love looking for ways to embarrass and annoy politicians with the perfect photo to discredit whatever point they are trying to make.

At one point Hillary’s campaign even thought Donald Duck costumes would be a good way to get under Trump’s skin, but that lame idea got shot down.

So, what sign are they using on Joe Biden? Ah, nothing much.

Just one that punches a hole in his gun logic.

Over the weekend, @JoeBiden:

– Claimed there are 3 genders
– Forcibly grabbed a young, female @tpusa activist to demean her
– Supports “truth over facts”
– Racist claim that poor kids are as smart as “white kids”
– Called Theresa May “Margaret Thatcher”
-Was trolled by this sign pic.twitter.com/K9nroWMcg3

The text says, “Joe Biden has been protected by assault weapons his entire life”.

Leaving aside any quibbling about the made-up term ‘assault weapons’, he’s making a good point. They guy who doesn’t want to have an armed populace sure does like being surrounded by ‘good guys with guns’.

What he hasn’t quite figured out yet is this: we might not be able to afford the kind of armed security watching his back that HE’s had pretty much all his life, but we ALSO like being surrounded by ‘good guys with guns’.

There’s something TO being your own First Responder in a legitimate crisis… especially when you don’t know if help is gonna get there on time.

Here are a few other Biden Stories that made the news recently:

Jailing The Preacher: Canada Is Demonstrating What Tyrants Will Do Unrestrained! They Cannot Produce Evidence of COVID-19
April 20th, 2021 Sons of Liberty Media