So much for the grand tradition of past Presidents riding off into the Sunset so that their successors can lead without interference.

Then again, Barack was never one for retaining American traditions, was he?

Even in the early days after slipping back into civilian life, Obama was seen to be running interference: Are Leftist Delusions Fuelling Obama & Co.’s ‘Shadow Government’? and even paralleling Trump as ‘shadow President’ in his visits to foreign leaders.

Dubya silently took the abuse Obama heaped upon him year after year, piling every one of his own failures in 43’s shoulders, deep into his second term. Now that he’s passed the baton, the successes are suddenly HIS doing.

After the shootings this weekend, Obama is meddling again, with this public statement:

“We should soundly reject language coming out of the mouths of any of our leaders that feeds a climate of fear and hatred or normalizes racist sentiments; leaders who demonize those who don’t look like us, or suggest that other people, including immigrants, threaten our way of life, or refer to other people as sub-human, or imply that America belongs to just one certain type of people,” Obama said.

“It’s time for the overwhelming majority of Americans of goodwill, of every race and faith and political party, to say as much — clearly and unequivocally,” he added.

Climate of fear and hatred, eh? Well, we can see you’ve remembered Rham’s message about never letting a serious crisis go to waste. You don’t mind looking like an opportunistic ghoul at all, do you?

Isn’t this the same guy who used the occasion of the memorial service of the slain Dallas police officers that were killed by a racially-motivated cop-killer — cops who were murdered WHILE they were escorting a peaceful Black Lives Matter march — to blast the police for ‘systematic racism’? The guy who actively tried to REVERSE the asylum duly granted to the Romeike family by the courts? The guy who commuted the sentence of a Traitor… mostly because Bradley became Chelsea? The guy who weaponized the IRS against grassroots political groups that opposed him?

That open contempt for law enforcement has taken root in his party. Antifa is the (current form) of violent expression of that disdain. But cops have been intentionally assassinated with that same language as the justification.

Obama had an opportunity to pump the brakes on HIS party’s misanthropes but was more interested in taking a swipe at Trump.

Trump, by comparison, did NOT use the corpses of slain Americans to further his agenda. He put any racists who think they might have a friend in Trump or his policies on blast.

Trump made it clear that anyone who sees Republicans as the vehicle of their agenda are gravely mistaken. His MAGA agenda — an agenda that has already alienated Jake Tapper’s guest Richard Spencer — applies equally to ALL Americans and lawful immigrants.

(Lest we forget, CNN would never bring it up, but Trump even risked offending his own base when he offered potential amnesty as a chip if Pelosi and Schumer would fix the border crisis for once and for all. It was PELOSI and SCHUMER that refused.)

If Trump’s a racist, well, he’s just not very good at it.

“Trumps about to execute a white supremacist, trying to free a black rapper from jail, pushing prison reform that directly benefits families of black men, while calling out a city where minorities are victims of crime & blight. if Trumps a racist, he sucks at it” -Greg Gutfeld

But Trump is something else — he’s a counter-puncher. So you can expect he won’t just absorb a shot like that from old what’s-his-name.

“It’s political season and the election is around the corner. They want to continue to push that racist narrative.” @ainsleyearhardt @foxandfriends And I am the least racist person. Black, Hispanic and Asian Unemployment is the lowest (BEST) in the history of the United States!

Obama didn’t even take his own advice, why should Trump take him seriously?

Hey Obama! Next time, before you wade back into the public conversation — again. Take a moment to reflect, and pour yourself a drink first. May we suggest: 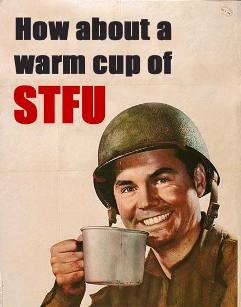 We’re kinda busy fixing the mess you left us, and would very much like it if you just go away and live off those millions you have from a few years of ‘public service’. You’ve already done your damage, and your fifteen minutes are just about up.