For as much as the media rails against Trump and his tweets, they hang on his every word. And today he had a LOT to say. Here’s a recap, and the key takeaways.

With China hitting us with retaliatory tariffs, and with the FED being a general pain in his ass, Trump took to his favorite megaphone to say what’s on his mind.

And those tweets, predictably, prompted a massive freakout.

We’ll give you the thread that set everyone off, before breaking them down one by one.

Just before the big thread was Trump talking up the US economy relative to the rest of the world, dismissing the ‘recession’ claims of his rivals and pledging to keep winning, economically, for the people no matter what roadblocks get thrown in his path. Then he tweeted early in the workday ‘Now the Fed can show their stuff’.

Two hours later, and obviously not happy with their decision, he had more to say.

Buckle up, here we go…

And then he really unloads with the rest: 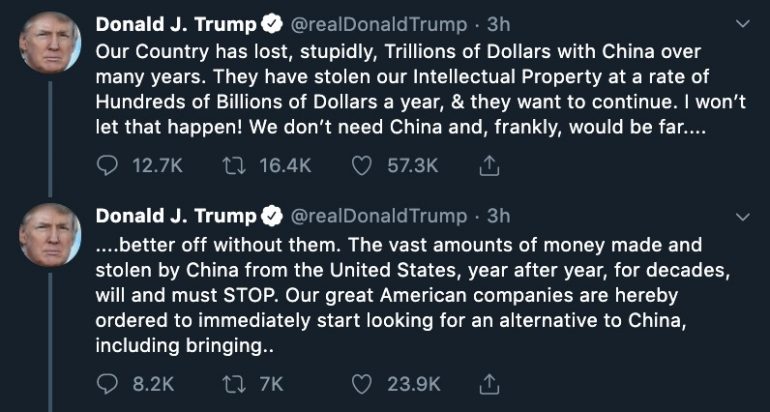 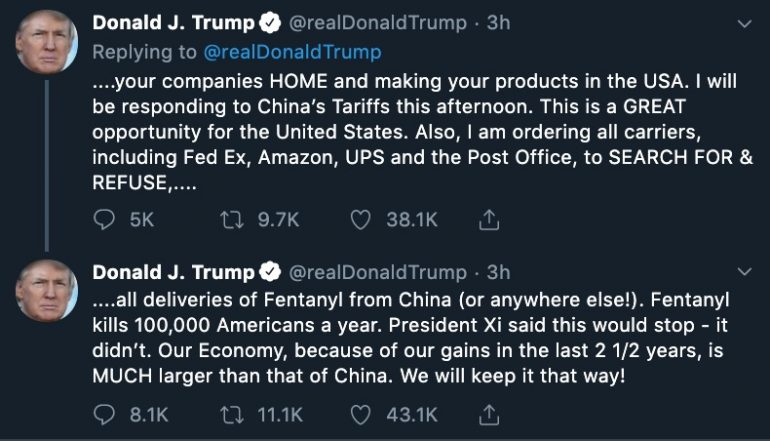 So, what are we to make of all that?

In the first part, we already know that Trump thinks the Fed’s rate hikes had been an anchor around the neck of the US economy he’s been working so hard to unleash, he is personifying and personalizing the public faces of two things he has seen as threats to America’s economic future.

In the four-tweet thread that follows, he Blasts China’s economic espionage and IP theft, currency manipulation, and how our economic engine has been boosting their economy.

In the second tweet, he talks about the huge economic drain we have endured from Chinese manufacturers siphoning money out of our economy, to our economic injury and uses an admittedly wildly controversial choice of words to encourage US companies to cut ties with China, and consider setting up shop elsewhere — other foreign countries, or (better still) here at home.

How are his critics upset by it?

First in the outrage column, we have people raging over Trump’s use of enemy.

Next is his use of the word ‘ordered’ in reference to private companies. We can expect the usual voices to cite this as ‘proof positive’ that Trump is an evil autocrat.

Is that legitimate criticism?

That would depend on how seriously you take his tweets.

For one thing, it is worth noting that the very same people known for calling Trump an unhinged lunatic, who think his tweets are a direct expression of his psychological ‘id‘ and who are openly wondering whether the 25th Amendment should be invoked for his removal are making a bold claim.

These same people claim that we are to take EACH and EVERY word he tweets as though it was carefully crafted by a wordsmith with prior intent and an expression of his true beliefs, not a snapshot of his emotional response to a particular issue at the time.

You simply can’t ride both trains. They take you to very different destinations.

Trump is well-known for speaking in very bellicose terms to people he’s ‘locked horns’ with, either on a personal or professional level. And if those clashes end amicably, all is forgiven and forgotten, they’re on the best of terms again. If they remain unresolved, that person is thrown on the discard pile, so to speak, and is likely to be used from time to time as a rhetorical whipping boy. (Isn’t that right, Jim Acosta? Shep Smith? Scaramucci? Need we go on?)

His ‘ordered’ word is, honestly, a bigger problem. We’ve got several possible explanations to choose from.

Here are some of the many other times Trump’s tweet made a splash:

Mayor Demands All School Board Members RESIGN Or Be CHARGED After Outrage Over Text Book
September 15th, 2021 The Lid