With Spicer invited to compete on Dancing with the Stars and Sarah Sanders offering commentary on Fox News, people are freaking out.

But strangely we heard no words of condemnation for Clapper, Brennan, Stephanopolous, Favreau (Pod Save America) etc. getting plum positions in the media.

But people on the left nodded approvingly when Susan Rice was hired to the board at Netflix (let’s pretend to forget that Soros is a leading shareholder) despite some really sketchy partisan moves on her part… including her inexplicable role in all that unmasking.

Spicer will be a contestant on Dancing With The Stars, which could be a GREAT opportunity for people of different political backgrounds to meet as simple Americans in a non-partisan forum.

And why would it be any more a problem for Sarah Sanders — who is widely admired and respected on the Right — to land work at Fox than it would be for, say — newly-minted NeverTrumper Scaramucci to be welcomed to CNN with open arms?

But no. People are freaking out.

And can anyone explain why the allegedly impartial down-the-middle ABC news employees would have such a charged political opinion?

Here's @brianstelter and me on our reporting about some ABC News staffers being upset over Spicer being selected for ABC's "Dancing With The Stars." Link to the digital story here: https://t.co/FYrWEcTKfH pic.twitter.com/w82T00TkWy

You will remember that Oliver Darcy was the CNN employee who actively pressured Twitter to punish Alex Jones (who embarrassed CNN by calling for ‘The Great Meme War’ calling them Fake News) with seeing him deplatformed.

Notice how Jim Acosta — who had a real personal stake in the game, too — are calling for the public shunning of political enemies. 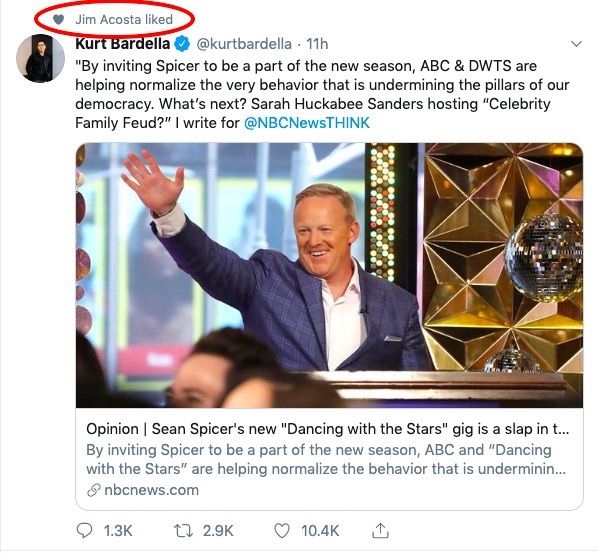 Here’s what that NBC opinion piece thinks about Republicans:

The dancing competition has long been a popular place for washed-up celebrities looking to rehabilitate or pump up their image. But Spicer shouldn’t get that chance — and he certainly doesn’t deserve it. –Source: NBCNews

When one party openly thinks people who vote for the ‘wrong’ political party should forfeit any right to participate in polite society, that says a lot about who the REAL ‘dangerous’ extremists in our society are.

After the total fizzling of two years of the ‘Russian Collusion’ case, and with their Media Allies committing to a leaked battle-plan of calling Trump racist for the next two years, any claims they have of being interested in truth aren’t just ‘suspect’ but they are wrong.

P*SSIFICATION: USA Today Snowflake Wants Twitter To BAN Trump Because He Was Rude to CNN

Should Mueller Investigate Susan Rice For Her ‘Colluding With Russia’ Decisions?

Race-Baiting CNN Invites Richard Spencer As Guest On Their Network

What do the Taliban do when they are not stoning women to death or decapitating sinners?
September 26th, 2021 Liberty Unyielding