Why the Squad members cry for the dismantling of ICE, those of us who haven’t lost our minds are grateful for the job they do.

It’s weird how one of the most ethnically diverse departments in the entire federal government gets tagged as somehow ‘racist’ when it’s politically expedient for the Left to demonize them, isn’t it?

While Ayanna Pressley continues calling for the decommissioning of ICE, the public servants in their departments continue to do their good work under difficult circumstances.

And that good work included keeping the bad guys away.

Trending: ‘REPENT’: Preachy Mayor Pete Called Out By His Own Evangelical Brother-In-Law

They have, for example, apprehended 933 gang members trying to illegally cross the border between points of entry. This number includes 445 Members of MS-13, whose motto is ‘Rape, Kill, Destroy’.

That’s 445 people from a gang delighting in the slow and painful slaughter of its victims that will NOT be roaming freely in somebody’s neighborhood. 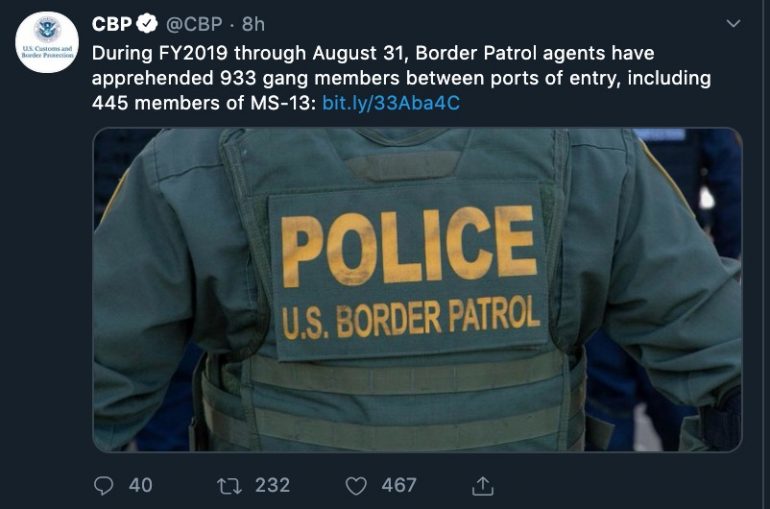 That’s 933 gang members who will not be roaming American neighborhoods looking for law-abiding citizens to exploit, rob or attack.

Beto wants the walls to come down.

Pelosi and company wanted to put all the security funding at the lawful points of entry. But it might come as a surprise to them all that criminals are adaptable and interested in results. If their goal of getting into the country is best served by crossing the open desert, then that’s what they’ll do to get into the country.

If they get CAUGHT more often than they get through — and pay some sort of a price strong enough to disincentivize the trip — the will look for some other strategy.

The endless cat-and-mouse game between lawbreakers and law enforcers will continue as it always had… but if the law makers ever stop intentionally tipping the odds in favor of the criminals, the law BREAKERS will need to do the changing and adapting.

Meanwhile, the Democrats aren’t just holding the line on their open borders policy– they’re doubling down. They are demonizing law enforcement. They are making American Citizens the villain and the border violaters the Victims… the shadowy groups and criminal organizing these movements don’t even enter into their calculations. Nor do the Angel families that the Partisan Press refuses to cover every time one a foreign-born criminal slaughters an American without pity or mercy.

But we KNOW their real motive, don’t we? In fact, they told us themselves:

It finished, “If Democrats don’t try to do everything in their power to defend Dreamers, that will jeopardize Democrats’ electoral chances in 2018 and beyond.”

It’s nothing more than a cold and calculating power grab. To hell with any oaths of office, or the best interests of the people who sent there. High office is where the real money, power and influence change hands. And that’s a lucrative gig that they can’t afford to give up. Not over something so simple and ‘outmoded’ as ‘principles’.

The country’s not going to ‘fundamentally transform’ itself, is it?