It’s not often that we cite a writer from ‘The Root’, but this thread excoriating Sleepy Joe’s ‘Corn Pop’ story is hilarious!

This must be why Biden’s handlers were trying to keep him OFF the campaign trail.

Joe got up and told us all a story. It was… well… interesting. Judge for yourself.

This is BIZARRE!
Here's Joe Biden telling the story of his face-off with a gang of razor-wielding ne'er-do-wells led by a guy named 'Corn Pop.' pic.twitter.com/DddRtWgdza

The story has him as a lifeguard in Wilmington. He threw ‘Corn Pop’ out of the pool, and he and his buddies were outside, waiting for him with rusty straight-razors to jump him.

Here’s a reaction from a writer at The Root, reacting to his story.

For those unfamiliar, it’s a strongly left-leaning site, written from an explicitly black perspective with the sort of views on racial dynamics one might expect of a strongly-left-leaning group, as will become obvious from the very first tweet.

“Thread: I’m always astounded by the imaginings of white people as it relates to race. Many of them have this fictionalized jigaboo version that is almost alien-like. And one of the greatest examples of this ever is Joe Biden’s story about Corn Pop the gangsta.

Now it has already been demonstrably proven that Biden will make stuff up. But any black person wh hears this story will automatically give you the side-eye and says: “N***a please.”

It begins when Biden was working as a lifeguard at a pool.

Now Biden is like 176 years old, but he’s still in pretty good shape. This supposedly happened in the summer of 1962. Biden says that, instead of hanging out all summer, he decided to take a job working as a lifeguard at a black pool

So, that summer, Biden was the only white lifeguard at Prices Run swimming pool in Brown-Burton Winchester Park. He says he did it– y’all, I SWEAR this is true — “in hopes of learning more about the black community.” 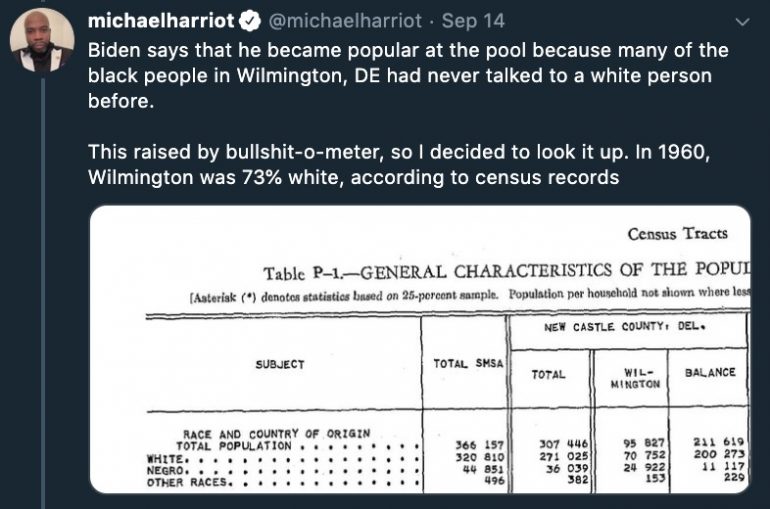 Biden says that he became popular at the pool because many of the black people in Wilmington DE had never talked to a white person before.

This raised my bulls**t-o-meter, so I decided to look it up. In 1960, Wilmington was 73% white, according to census records. 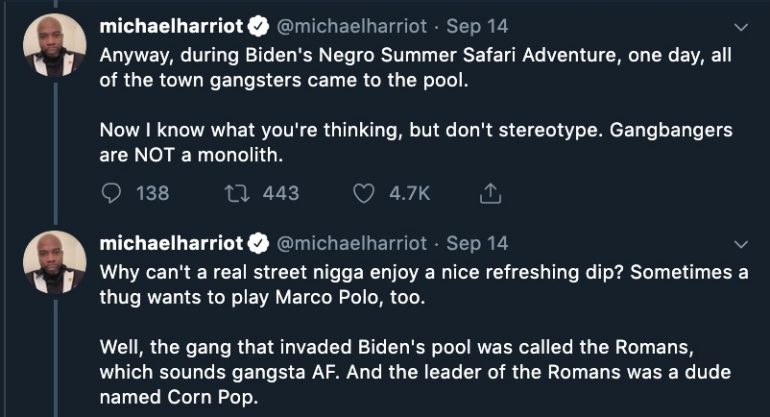 Anyway, During Biden’s Negro Summer Safari Adventure, one day, all of the town gangsters came to the pool.

Now I know what you’re thinking, but don’t stereotype. Gangbangers are NOT a monolith.

Why can’t a real street n***a enjoy a nice refreshing dip? Sometimes a thug wants to play Marco Polo, too.

Well, the gang that invaded Biden’s Pool was called the Romans, which sounds gangsta AF. And the leader of the Romans was a dude named Corn Pop. 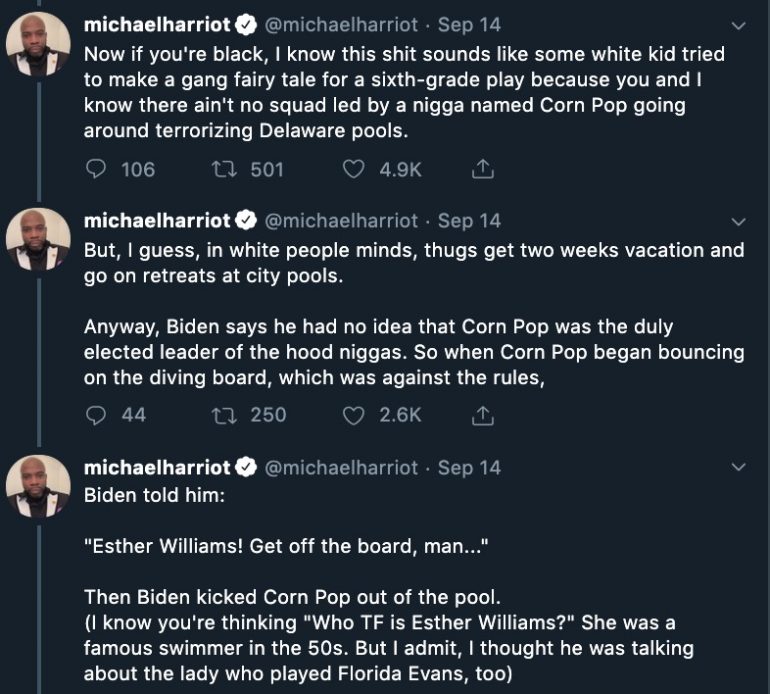 Now, if you’re black, I know this s**t sounds like some white kid tried to make a gang fairy tale for a sixth-grade play because you and I know their ain’t no squad led by a n***a named Corn Pop going around terrorizing Delaware pools.

But I guess, in white people’s minds, thugs get two weeks vacation and go on retreats at city pools.

Anyway, Biden says he had no idea that Corn Pop was the duly elected leader of the hood n***as. So when Corn Pop began bouncing on the diving board, which was against the rules,

“Esther Williams! Get off the board, man…”

Then Biden kicked Corn Pop out of the pool.

(I know you’re thinking “Who TF is Esther Williams/” She was a famous swimmer in the 50s. But I admit, I thought he was talking about the lady who played Florida Evans, too.)

Anyway, after he kicked the probably fictitious Corn Pop out of the pool, everybody was like: 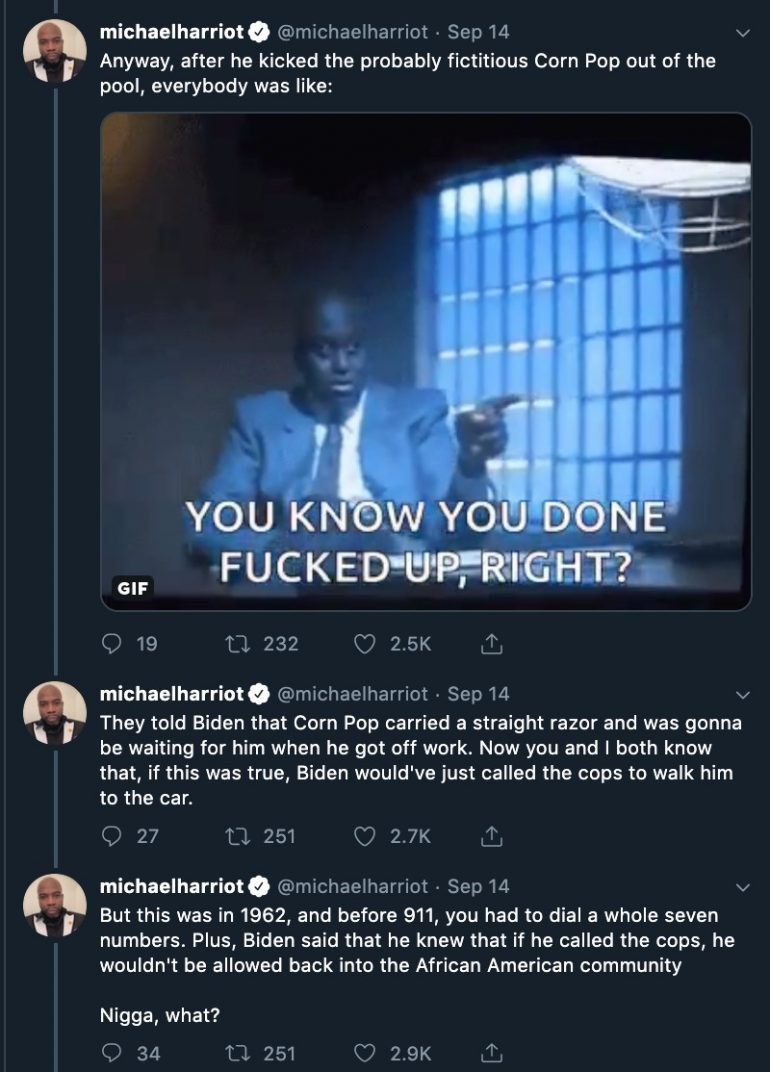 They told Biden that Corn Pop carried a straight razor and was gonna be waiting for him when he got off work. Now you and I both know that, if this was true, Biden would’ve just called the cops to walk him to the car.

But this was in 1962, and before 911, you had to dial a whole seven numbers. Plus, Biden said that he knew that if he called the cops, he wouldn’t be allowed back into the African American community.

Anyway, Biden says, instead he wrapped a six-foot metal chain around his arm and wrapped that in a towel. Because everyone knows there are ample black chains just laying around the ‘African America community” but no police officers.

When he went out to the car, Corn Pop was indeed waiting for him. But Biden went Clint Eastwood on Corn and told OG Pop from the Romans:

“You might cut me, Corn Pop, but I’m going to wrap this chain around your head before you do.”

Again, that is a direct quote. 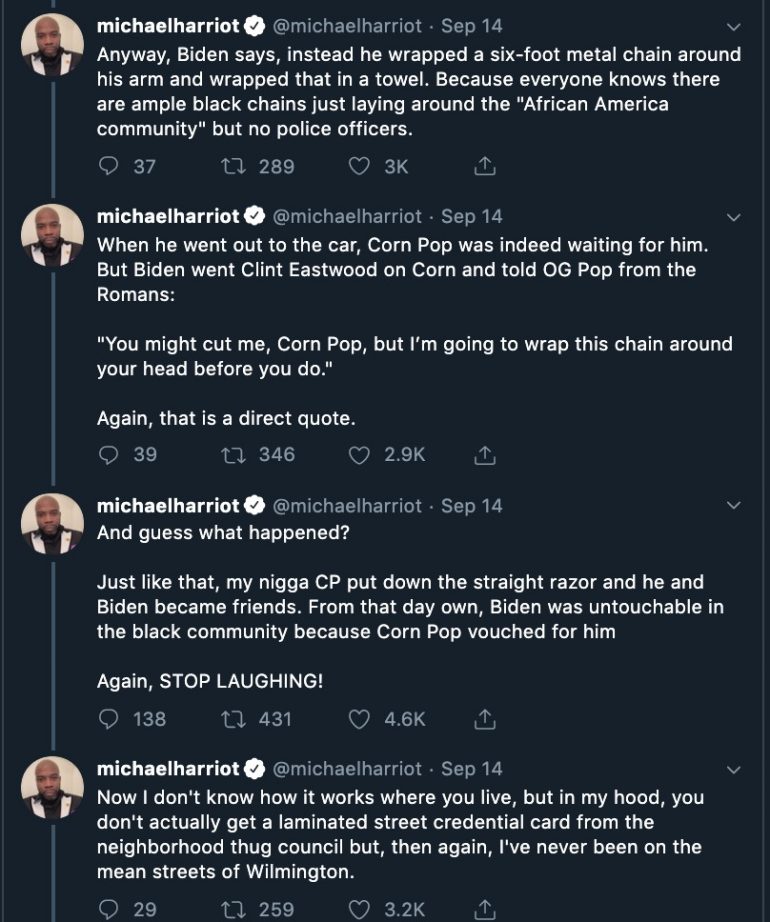 And guess what happened? Just like that, my n***a CP put down the straight and he and Biden became friends. From that day own[sic] Biden was untouchable in the black community because Corn Pop vouched for him.

Now I don’t know how it works where you live, but in my hood, you don’t actually get a laminated street credential card from the neighborhood thug council but, then again, I’ve never been on the mean streets of Wilmington.

It turns out there ARE some things that we on the right, and intersectional leftists can agree on. There is a consensus view that Old Joe is full of crap.

It can’t hold a candle to that time he claimed he went on a condom crusade through the hood telling black dudes to wear a raincoat. pic.twitter.com/yZtfXGqDFd

One Year After His Death, John McAfee’s Corpse Is Still Being Held By Government – Fueling Claims Of A “Cover Up”
June 25th, 2022 Sons of Liberty Media