The Anti-Defamation League has added 36 new items to their online database of white supremacist hate symbols.

Among the new list are the bowl-haircut worn by the white supremacist Charleston Church shooter, the “Ok” hand gesture, and a smiling moon wearing sunglasses.

The “OK” hand gesture, a mass killer’s bowl-style haircut and an anthropomorphic moon wearing sunglasses are among 36 new entries in a Jewish civil rights group’s online database of hate symbols used by white supremacists and other far-right extremists. The Anti-Defamation League has added the symbols to its online “Hate on Display” database , which already includes burning crosses, Ku Klux Klan robes, the swastika and many other of the most notorious and overt symbols of racism and anti-Semitism.

The New York City-based group launched the database in 2000 to help law enforcement officers, school officials and others recognize signs of extremist activity. It has grown to include nearly 200 entries. “Even as extremists continue to use symbols that may be years or decades old, they regularly create new symbols, memes and slogans to express their hateful sentiments,” Anti-Defamation League CEO Jonathan Greenblatt said in a statement. 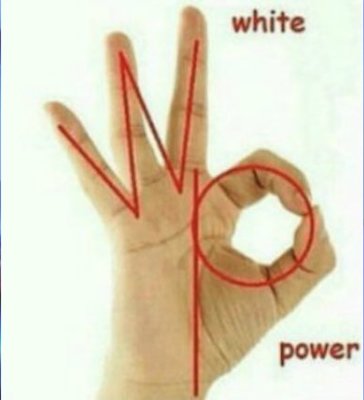 This was a deliberate trolling attempt in 2017 by Reddit, 4chan, and 8chan trolls to make Media Matters and the Anti-Defamation League look stupid.

In February 2017, 4chan users started the hoax “Operation O-KKK,” a call to spread the sign around the internet and claim it as a symbol of white supremacy. The anonymous 4channer who started it added a graphic demonstrating how the gesture could spell out the letters WP for “white power.” The same month, Media Matters for America accused Gateway Pundit founder Jim Hoft, who made the gesture in a photograph in the White House press briefing room, of using a “hate symbol.”

“Leftists have dug so deep down in their lunacy, we must force [them] to dig more,” the 4channer wrote in their post. “Until the rest of society ain’t going anywhere near that shit.”

The news was mocked widely on social media.

If you support Obama or the Clintons, you support white supremacy. pic.twitter.com/yDV7nAevD4

That last one was pretty amazing! How are they going to get rid of the entire alphabet in American sign language?

Besides, we live in an age where everything is racist.