Last night, there was a firestorm on Fox News when one guest called out another for his statement about the teen climate activist.

While discussing the proposal for “Meatless Mondays”, Knowles said that a 2015 Carnegie Mellon University study showed that switching to a meatless diet is actually more harmful to the environment. He then likens the proposals by climate change activists to a religious movement and a political movement rather than a scientifically-based one. He adds, “If it were about science it would be led by scientists rather than by politicians and a mentally ill Swedish child, who is being exploited by her parents and by the international Left.”

Hahn interjected, “How dare you!”

Alright, let’s unpack this claim made by Knowles.

He says that Greta is “mentally ill.”

Her Twitter profile used to tout that she was a teen climate activist with Asperger’s Syndrome, which has been classified as an Autism Spectrum Disorder. 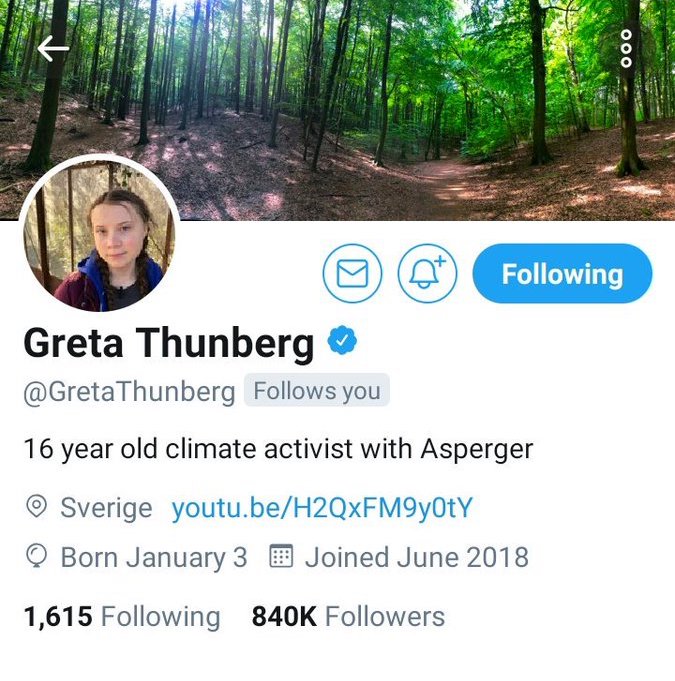 A New York Times reporter cheered on Greta (or her handlers) for changing the Twitter profile after President Trump tweeted out the video of her crying because politicians aren’t taking the “extinction-level” threat of climate change seriously enough to enact socialism. President Trump wrote, “She seems like a very happy young girl looking forward to a bright and wonderful future. So nice to see!”

Is it fair to call Asperger’s Syndrome a “mental illness”?

It’s a developmental disorder which affects socialization and can have physical symptoms like clumsiness and repetitive movements. It used to be called “high functioning autism” and is characterized by awkward socialization, niche interests, and increased levels of frustration, anxiety, and depression. These are all on a spectrum of mild to severe.

But Asperger’s Syndrome can be confused with other diagnosed mental illnesses among them are: obsessive-compulsive disorder, schizophrenia, social anxiety disorders, bipolar disorder and more. The World Health Organization classifies Asperger’s Syndrome as an Autism Spectrum Disorder which is on the spectrum of psychological conditions.

So it is with Greta. She has not been diagnosed with Asperger’s Syndrome alone. According to a book written by her mother, Malena Ernman, Greta has also suffered from depression, anxiety, obsessive-compulsive disorder, an undisclosed eating disorder, and selective mutism. That was before she made her debut as the “spokes-teen” for climate change. Greta’s climate activist mother also claims that Greta can see CO2, an invisible gas, with the naked eye.

Greta is one of the few who can detect our carbon dioxide with the naked eye. She sees the greenhouse gases pouring out of our chimneys, rising to the sky with the wind and transforming the atmosphere into a gigantic invisible rubbish dump. She is the child, we are the emperor. And we are all naked.

Excerpt From: “Scenes from the Heart. Our life for the climate ” by Greta & Svante Thunberg, Beata & Malena Ernman.

The book also explains how Greta, when in Fifth Grade, learned about plastics in the ocean. After watching how the plastics affected marine life, she slipped into such a profound depression that she refused to go to school or even eat. The family could only manage to coax her to eat by giving her food in front of the T.V. while binge-watching seasons of the television show, Once Upon A Time.

The small excerpt from the book posted in the Frankfurter Allgemeine also included the repeated attempts that Greta’s parents made to have her sister, Beata, diagnosed as well. “In the end, Beata is diagnosed with ADHD, with Asperger’s features, OCD and a disorder with oppositional defiance,” writes Malena Ernman. And it was a relief. Because now all her behavior could be sorted and explained.

So, to sum up, Knowles is saying that Greta Thunberg is mentally ill for suffering from autism, OCD, selective mutism, some sort of eating disorder, anxiety, depression, and saying that she has the magical ability to see CO2 with the naked eye. He may also include Asperger’s Syndrome in there, but it’s not quite clear.

But you can’t criticize Greta or those thrusting her into the spotlight.

Hahn called Knowles out for calling her “mentally ill.”

“You’re a grown man and you’re attacking a child. Shame on you,” said Chris Hahn.

Hahn interjected, “She’s trying to do what she thinks is right. Relax skinny boy! I got this. Ok, you’re attacking a child you’re a grown man. Have some couth, Ok, when you’re on television…”

“Maybe on your podcast you can get away and say whatever you want because no one is listening, but you’re on national television. Be a grown-up when you’re talking about children. She’s trying to save the planet because your president doesn’t believe in climate change and kids need to take to the streets to worry about their future. You are despicable for talking about her like that and you should apologize on national television right now,” shouted Hahn.

So, it’s shameful to pick on a child? When did that change?

The left has been attacking Barron Trump, Parkland survivor, Kyle Kashuv, and other conservative teens at every opportunity.

But maybe not Chris Hahn.

I’m sure that Hahn was similarly outraged when the left said horrible things about 16-year old Nick Sandmann’s “punchable face” for his “smirk” when confronted by Nathan Phillips and black racists in Washington, right? Hahn must’ve been apoplectic when Sandmann’s family was doxxed, calls for violence were made against him, the teen was labeled the “face of hate” and smeared by prominent actors, the media, and even Democrat politicians. Especially when Sandmann’s lawyer released full video exonerating his client.

Fox News decided that they had to distance themselves from what Knowles has said.

In a statement, Fox News apologized for Knowles’s statement calling it “disgraceful.”

Fox News statement: “The comment made by Michael Knowles who was a guest on The Story tonight was disgraceful – we apologize to Greta Thunberg and to our viewers.”https://t.co/xntmck7flY https://t.co/UEx056C2el

Knowles, however, is not apologizing.

Her mother wrote a book about her mental issues. There is nothing shameful about living with mental disorders.

What is shameful is exploiting a child—particularly a child with mental disorders—to advance your political agenda. https://t.co/oNR6iw7mRF

Was Fox News Right Or Ridiculous For Apologizing For The Comments Made By Knowles?

Greta Thunberg is the perfect spokesperson for the climate activists. She cannot be criticized.

She is literally being used as a human shield to push adopting socialism in order to deal with climate change instead of looking at alternatives like… nuclear power.

BREAKING: BIDEN NEEDS TO PAY FOR WHAT HE JUST DID TO THE NAVY!!
AFF

A Message To Pete Buttigieg: Hey Buddy Quit Playing House And Get Your Butt To Work!
Washington Exterminator

Woman Raped On Train As Bystanders Did Absolutely Nothing To Help Her
October 17th, 2021 Liberty Unyielding

Aaron Lewis Unleashes on Dems: They’re ‘Responsible for Every F***ing Scar That Exists’ on America
October 15th, 2021 Flag And Cross

Even Criminal TSA Employees Now Refusing The “Vaccine” Mandate – 40% Have Not Taken The Shot
October 17th, 2021 Sons of Liberty Media