What does it say about a magazine so hellbent on protecting protesters with a history of violence against passers-by, police, and protesters they disagree with that they will write a hit piece about a journalist?

And it looks like not much has been learned since the days when they were publicly humiliated for reporting their now-infamous piece ‘A Rape On Campus’. They still seem to be working backward from their assumptions… and they are still happy to ‘straw-man’ anyone they disagree with politically.

The story opens by EJ Dickson saying that the photo of him being attacked by Antifa Protesters led to him successfully achieving his goal of getting people on both the right and the left to ‘demonize’ Antifa.

Seriously? Have you been sound asleep for a couple of years there, EJ? There’s a much broader body of evidence than one exchange and a hospital admission that could lead to the ‘demonization’ of Antifa.

After a brief introduction, it charges ahead.

Someone claiming to have infiltrated Patriot Prayer and procuring ‘damning’ evidence against them published a scathing denunciation of them. It invoked all the Lefty-est of buzzwords and extreme negative caricatures of the Right, their speech and their motives.

The way it was written could not possibly have checked off any more boxes of how ‘deplorables’ are viewed by elitists on the Left. It couldn’t possibly offer redder ‘red meat’ for the feeding the leftists’ assumptions about what really motivates the political right.

That alone was enough to get this scribbler’s BS meter pinging, but here’s the article so you can read it and judge for yourself.

Rolling Stone picked up on that story and ran with it, taking it as Gospel Truth and perpetuating a story Andy Ngo’s lawyer has called ‘defamatory’. (She demanded a retraction.)

As you read what follows, take note of the harsh terms used to describe the right as contrasted against the neutral or even approving words used of the Antifa and the left.

For example, are there any examples of ‘far-left’ invoked? No. But they freely apply terms like ‘far-right’ and ‘provocateur’ to individuals and groups OTHER than the (anti-first-amendment group) that Dickson goes out of his/her way to call ‘antifascist’. (Yet another way of framing this as a good-guy protest group versus bad-guy protester.)

Nowhere was this demonstrated more quickly than in the case of the meteoric rise and equally rapid fall of Andy Ngo, the provocateur and social media personality who garnered nationwide sympathy last June, when he tweeted that he was attacked by antifascist protesters at a Proud Boys rally. Last week, the local newspaper the Portland Mercury reported that a left-wing activist going undercover as a member of Patriot Prayer, a far-right group known for promoting and engaging in violent clashes with leftist activists, had given the publication an 18-minute video that included footage of Ngo with a group of Patriot Prayer members as the members discuss an upcoming brawl, including weaponry to be used in altercations with antifa. Ngo, who describes himself as a journalist, did not record the conversation, and does not appear to have his camera or notebook out. For part of the footage, he is seen on his phone.

… But the issue wasn’t so much that Ngo had finally been “exposed” as a right-wing provocateur as opposed to a journalist. It was that he’d managed to successfully convince so many ostensibly reasonable people otherwise, despite significant evidence to the contrary — and, in so doing, did some serious damage in the process.

…It was the experience of getting fired that apparently gave Ngo his first taste of martyrdom. He started fashioning himself as a gonzo independent journalist of sorts, showing up at various far-right rallies in Portland, a city that has increasingly become a battleground of the culture wars. He developed a knack for obtaining footage of anti-fascist protesters that leaned into preconceived notions of radical leftists, making them look violent, red-faced, angry, or even just irrational, a gimmick that landed him a handful of spots as a commentator on Fox News. He also found the time to rack up a few bylines, penning an investigation into “the suspicious rise” of gay hate crimes in Portland for the New York Post, which notably quoted a gay Proud Boys member as saying it was “the most welcoming organization that I have ever been a part of.”

But it wasn’t until Ngo was attacked at the June rally that he truly ascended to the ranks of right-wing media shit-stirrer. “Attacked by antifa. Bleeding. They stole my camera equipment. No police until after. waiting for ambulance . If you have evidence Of attack please help,” he tweeted, later adding that he had been diagnosed at the ER with a brain hemorrhage and that antifa had thrown quick-dry cement milkshakes at him. (This claim was later debunked.) Footage also surfaced on Twitter of Ngo at the rally, being doused with a milkshake and silly string, and getting punched by an antifascist protester.
Source: Rolling Stone

We’ll wait for the facts and alleged video to sort themselves out before saying anything for or against the claims spelled out in that quote. We’re specifically more interested in the manner in which it was reported.

We can’t help but notice nothing about that Rolling Story story was ‘just the facts, Ma’am’. 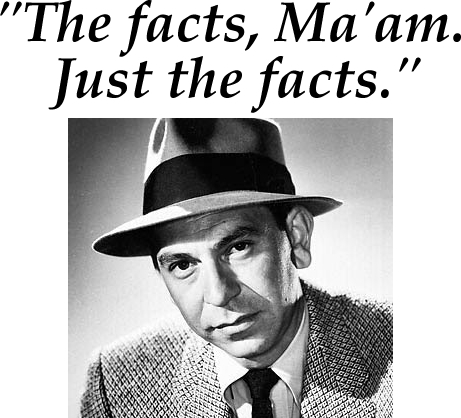 Joe Friday — and anything his era represented — is officially dead. If journalists ever did share Detective Friday’s approach to information-gathering, that practice is long since dead, too.

For us, the interesting story here isn’t the hit piece itself but in what that story set out to accomplish. As you know, we no longer live in an era of NEWS, but of NARRATIVE.

And that difference is important.

We have no objection to, say, any honest NYTimes story about slavery; one that serves to instruct and inform, any more than we would object to someone using the anniversary of Anne Frank’s arrival at Auschwitz (September 5th, 1944) to remind people why we say ‘Never Again’.

But the NYT Editors were busted instructing their staff what ‘narrative’ they want to sell for the next two years. Surprising exactly nobody, that narrative is ‘Trump is racist’. Even their 1619 project is being written with an eye to shaping that story.

So, what is this Rolling Stone story really up to?

It seems an obvious attempt to re-cast who the good guys and the bad guys are in this situation.

After all, if an unarmed gay reporter — the son of Vietnamese refugees, no less — gets assaulted by a group of violent anarchists who claim only to be targeting ‘fascists’, it makes Antifa look like a gang of domestic terrorists trying to use force and intimidation to push an extreme left agenda.

The inconvenient facts that one guy who died trying to firebomb an ICE Detention facility in Washington, and the shooter in Dayton were both either affiliated with or sympathetic to Antifa’s ideas; or that restless Antifa members regularly clash with cops while crashing; or that intimidating and interfering with other group’s free expression and association, and that arrests of Antifa frequently result in the confiscation of weapons have NOTHING to do with public perception of Antifa as a violent political anarchist group.

How could Antifa possibly recover their ‘antifascist’ reputation after directly attacking a journalist who scores so high on the left’s own victim hierarchy?

It’s really quite simple. Make Ngo the bad guy. Spin a new narrative: he ‘deserved it’. (Or at least, he provoked it and brought it upon himself.)

Use the same tactics the Times are using to try to keep minorities from supporting Trump.

Hit him with accusations of being the sort of person that society quite happily holds in contempt already. With Trump, they play the racist card.

That won’t work with Ngo. But they CAN still play the ‘Nazi’ card. Especially if they can provide enough innuendo to make the reader think, “well, maybe…”

And ‘well, maybe’ is all the foothold they need.