When the topic of education came up, Biden had his canned answer prepped and ready. But maybe he should have checked the expiry date before opening it.

But what do we REALLY expect from a candidate who’s held elected office since the Vietnam War… and only one short year after the moon landing?

As bad as THAT answer was, at least he kept his teeth in his mouth long enough to spit that one out. (Or WHATEVER it was that going wrong in his other answer.)

And, if you notice, ‘record player’ is his ‘corrected’ answer.

Was this a ‘can someone tell me what century it is’ moment? Or is this his super-seekret ploy to lock up the hipsters and their retro hi-fidelity analog stereo systems?

We’re pretty sure most school-age kids are getting their music from something with WIFI, not something that’s HiFi.

Oof. He was dragged quite a bit on social media. 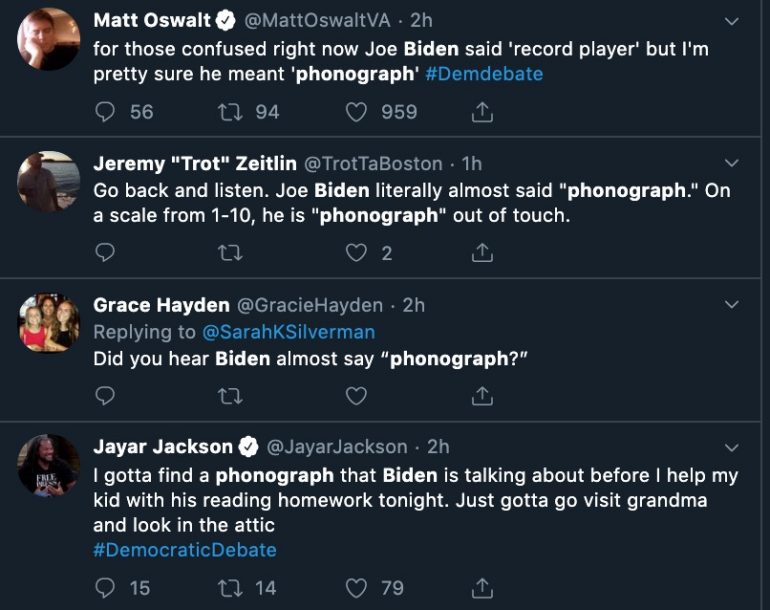 People will make fun of Biden saying "record player", but that's not fair. They should be making fun of him for trying to correct himself by saying "phonograph". Thankfully, he stopped himself at "phon…" when he figured it out.

Maybe, if he wins, he will consider choosing the RCA dog as his running mate?

Here he is at another point in the same debate with something weird happening with his teeth.

“The only thing that spends more time in Biden’s mouth than those perfect teeth, is his own foot.”

OUCH: Jill Biden Tells Democrats ‘Your Candidate Might Be Better’ But JOE Can Beat Trump (Video)

SAVAGE: Biden’s Latest Gaffe About What Decade MLK And RFK Were Assassinated Was Shown No Mercy