Sure, it’s Halloween, but she’s a grown-a$$ woman who is literally a lawmaker. A little professionalism would be nice.

Also, please, I beg you as a Drama teacher, if you absolutely must don a costume for work on Halloween — make at least a feeble attempt to find a flattering one.

She decided to wander around the Legislature in an incredibly unflattering Batgirl costume… on the very day that Speaker Pelosi decided to call a full House vote on impeachment.

Yeah, this ain’t the way to do it, Katie.

The National Republican Congressional Committee pointed out the photos along with this spicy post to their website: 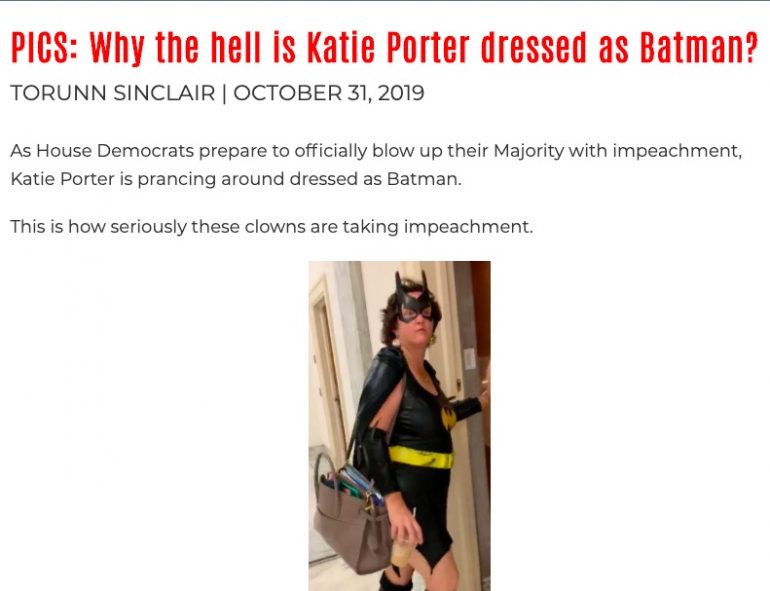 As House Democrats prepare to officially blow up their Majority with impeachment, @RepKatiePorter is prancing around dressed as Batman.

This is how seriously these clowns are taking impeachment. #CA45 https://t.co/5MtDwuoP0J pic.twitter.com/IGURqGViMl

Of course, the NRCC was dragged for being “boring” and not understanding the concept of Halloween, but… does anyone else find it weird that a 45-year old lawmaker is wearing a short Batgirl costume on the Hill? As I said, I teach Drama and I find that weird.

She is literally the only person in a costume.

Some right-wingers are having a bit of fun with it. She was questioned about whether Alfred receives the minimum wage and that she may have presented a possible funding source for the Green New Deal.

"Does Alfred get minimum wage?"

"If you return the batmobile could you pay for the Green New Deal?" pic.twitter.com/4sQuVxAuxw

She was so upset that she dropped her drink on the bathroom floor as she tried to hide.

Can you blame her?

She’s walking around the halls of Congress wearing a cheap Batgirl costume with a horrendous mask that looks like she’s got antennae.

Los Angeles Times reporter, Sarah Wire, decided to weigh in and stick up for Rep. Porter… except… she was wrong.

There is both photo and video evidence.

If only she’d known.