You can put another tally in that win category.

Remember how angry the left was when their judicial nominee to replace the late Antonin Scalia was blocked? Garland, wasn’t it?

They were really sulky when Neil Gorsuch got the nod for that role.

And a year later, we saw how the Left was ready to tear the country in half in the process of illicitly disqualifying Judge Kavanaugh.

With so much division built into the nomination process, you might think the President’s nominations would have eroded public confidence in our courts, but that isn’t what the data shows us at all.

Gallup has approval up by 12 points (from 42 to 54 percent) since the addition of Justices Neil Gorsuch and Brett Kavanaugh. Annenberg shows that 68 percent of Americans have “a great deal” or “a fair amount” of trust in the Court; its poll in 2013 had 58 percent choosing one of those options.

While some conservatives have been disappointed about the cautiousness of the Court’s majority, conservatives are generally pleased by its direction — and are driving the increased public confidence.
Source: National Review

If you look at the chart, their current approval is higher than it was for the majority of the Obama administration. 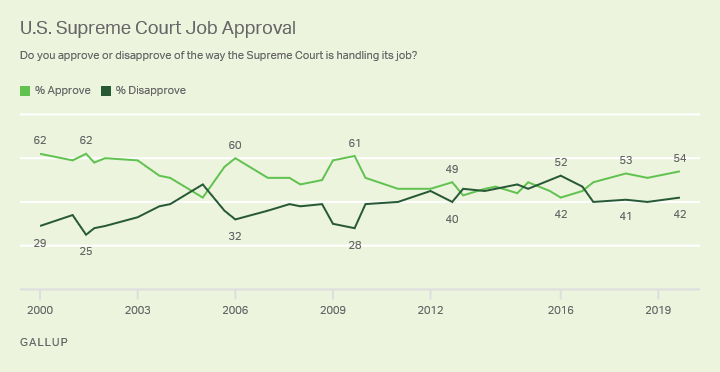 Who would have guessed that Trump would have been so good for public confidence in the institution of our highest court?