When Trump called the poll out as garbage, the usual media talking heads mocked him. And yet, HE was right!

Maybe it’s this is a function of his default bluster, maybe it’s a question of good intel, or maybe he’s just got solid instincts for sniffing out this sort of thing.

But when the (comparatively) friendly news outlet Fox released a poll that looked pretty bad for the public attitudes for whether Trump should be impeached — and removed from office — Trump called BS.

And he did it in his usual bellicose fashion. 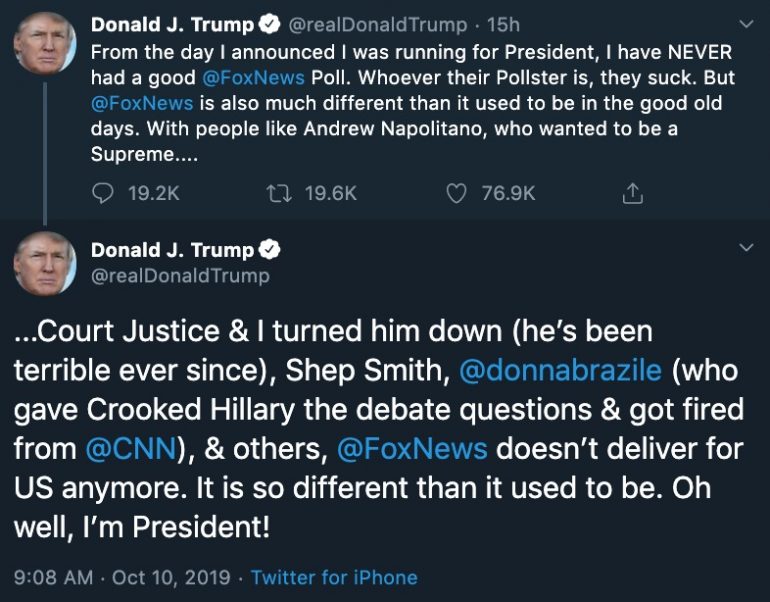 In fairness, that’s sort of his default answer to bad news… but we can’t help but notice he very often turns out to be correct. This suggests a real deficiency in the polls themselves.

“It’s not hard to get 51% in favor of impeachment when nearly half of those polled were Democrats,” a Trump campaign official said in a statement to the Daily Caller. “The media should put this poll where it belongs – in the garbage.”

“51 percent wants Trump impeached and removed from office, another 4 percent want him impeached but not removed, and 40 percent oppose impeachment altogether,” Fox News reported Wednesday, a result that signified a 9 percent jump from July, when the question was last posed.

…While 48.1% of its random sample of 1,003 voters considered themselves Democrats, only 40% were Republicans. Independents comprised only 12 percent, a fact Trump War Room’s Twitter account was quick to take issue with.

The network’s July polling sample included 46% Democrats and 15% Independents, a 5 percent shift that, while still leaning heavily Democratic, might have represented a shift from the narrative of the majority of Americans supposedly supporting removing the president from office.
Source: DailyCaller

This poll is garbage pic.twitter.com/rszlhZRgm9