Dear Lord! Does it HURT to be this stupid?

Have you ever watched someone say something on cable news and wondered how they could say what they are saying and still be a functioning human being?

If not, well, you’re in luck — because you can scratch that one off of your bucket list.

If you think that this was a meeting of the minds — whoa, Nelly! Brace yourself!

It got really weird really quickly.

Beto claims — in a bold, novel theory — that President Trump is inspired by Nazis.

I know, I know! You’ve never heard that one before.

But trust me — you’ve never heard it quite like this.

Behold as one idiot is egged on by another.

BETO: President Trump, perhaps inspired by Gurbels [Goebbels] and the propagandists of the Third Reich, seems to employ this tactic that the bigger the lie, the more obscene the injustice, the more dizzying the pace of this bizarre behavior, the less likely we are to be able to do something about it.

SHARPTON: Did I hear you correctly say that perhaps he [Trump] was influenced by Gurgle and the Third Reiche [Reich] in terms of telling a big lie? I just want to make sure that’s what I heard you say.

BETO: That’s right. There is so much that is resonant of the Third Reich in this administration, whether it is attempting to ban all people of one religion and saying that Muslims are somehow inherently dangerous or defective or disqualified — outside of Nazi Germany, it’s hard for me to find another modern democracy that had the audacity to say something like this. And then, this idea from Gurbels [Goebbels] and Hitler that the bigger the lie and the more often you repeat it, the more likely people are to believe it. That is Donald Trump to a “T.” The things that he says about immigrants — committing crimes, being rapists, being predators and animals, seeking to dehumanize them — that’s how we get them in cages. That’s how we lost the lives of seven children in our custody and care. Talking about African American women duly elected by their constituents as somehow being less than American and telling them to go back to their own country — or calling white supremacists and neo-Nazis and Klansmen “very fine people” — the signal that he is sending is being picked up by Americans who are willing to work on that hatred and racism. And Reverend Sharpton, we saw it brought home to us in El Paso on August 3, when someone repeating the President’s own words in his manifesto opened fire on people in El Paso, Texas, killing 22 of them in a Walmart on the Saturday before school started that next Monday. This is the cost and consequence of Donald Trump.

Al Sharpton asks O'Rourke if that's what he really said, to which O'Rourke responded: "That's right"

Nearly everything O'Rourke says in this clip is a complete lie pic.twitter.com/nZPrWQJMO0

Ok, yes, it’s hilarious that neither of them can pronounce the name Goebbels. It’s also hilarious that Beto didn’t correct Sharpton for saying ‘Gurgle’ when referring to the Nazi propagandist.

But, really, Beto seems to be oblivious to the irony of what he’s saying.

In just a short clip, he used most of the major lies that are spread about President Trump including the gigantic whopper, the “Fine People Hoax.” It has been reported for two full years that President Trump has called the neo-Nazis and white supremacists in Charlottesville “fine people” but despite what the Media(D) is pushing, the truth is that he deliberately and explicitly excluded them in the same breath and repeated it shortly after. You can read the transcript as posted by the Los Angeles Times. If you don’t trust the L.A. Times you can watch the video on YouTube.

Here’s a screenshot of the transcript with the relevant parts denouncing racists highlighted. 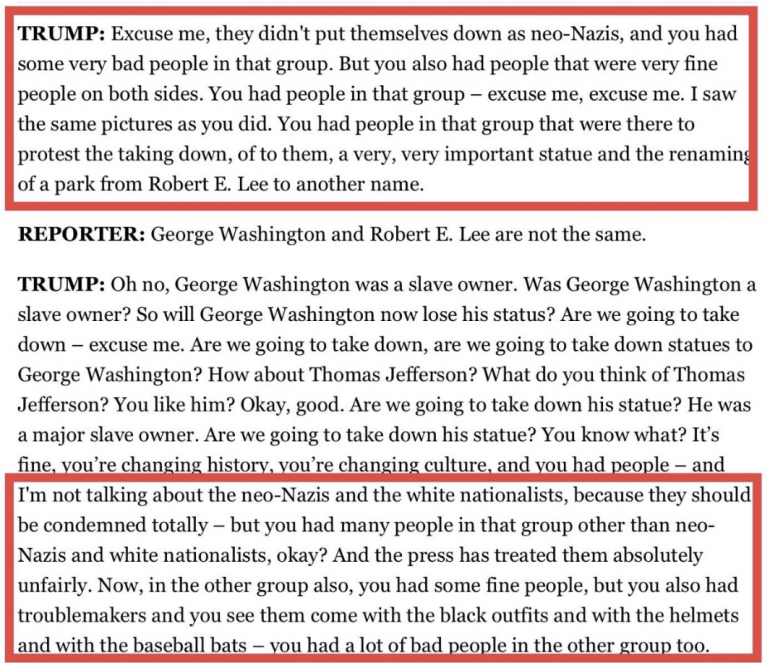 Scott Adams has been banging this drum since Day 1.

Beto explains a Nazi technique called The Big Lie and then demonstrates how he is using it successfully to become a guest on MSNBC. Context on the #finepeoplehoax is here: https://t.co/mOdrb7Hklc https://t.co/Ey6GtHOjJP

Might it be the guy who was out-Betoed by Pete Buttigieg and is floundering at 0% in the primaries?